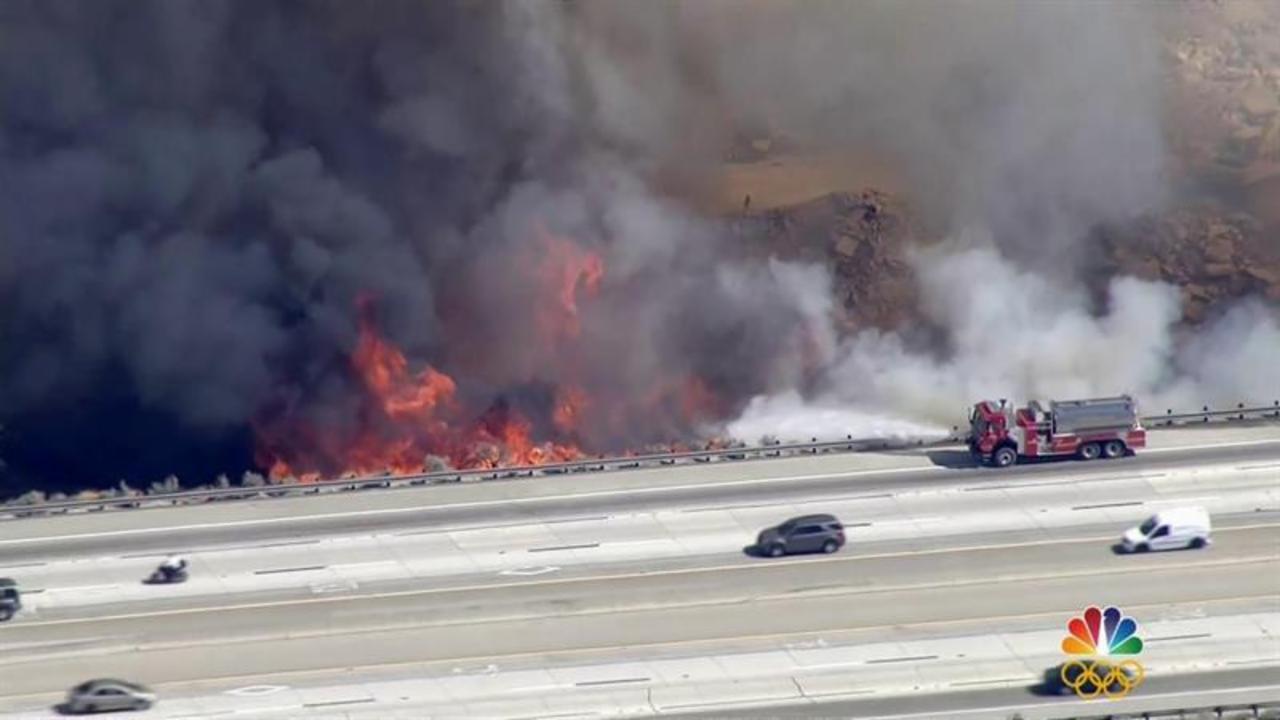 Evacuation orders remained in place for around 1,500 homes near a wildfire north of Los Angeles early Sunday, after the blaze nearly doubled in size Saturday.

Detectives were trying to determine whether the person was killed by the blaze or another cause, Los Angeles County sheriff's Lt. Rob Hahnlein said. The home also may have burned, he said.

The fire broke out at around 2:11 p.m. local time Friday (5:14 p.m. ET) and swelled to 11,000 acres by noon Saturday and then to 20,000 acres by Saturday evening, fire officials said. More than 900 firefighters were battling the blaze, the Angeles National Forest said.

At least one structure has been destroyed and 100 commercial structures were threatened, the fire department said. The fire was 20 percent contained as of 11 p.m. Saturday.

Then... just in the nick of time... #LAFD rolls up! #SandFirepic.twitter.com/0EUDxsTW2G

An animal sanctuary was among those threatened by the fire. Animals, including bears, chimpanzees and bison, were being moved from the sanctuary by Saturday, according Wildlife Waystation, the group that runs it.

However, there was good news Saturday evening: The winds had changed direction and firefighters had contained the blaze near the facility, the group said. "They have ceased evacuation of the rest of the animals, as they have been deemed SAFE!!" Wildlife Waystation said on Facebook.

"One wind shift and this whole place could be gone in half an hour," one person who left his home, Chris Freeman, told NBC News.

The smoke and flames were seen for miles around. Ash fell on cars in Pasadena and on beaches in Malibu. The smoke created unhealthy air conditions in large parts of the Los Angeles area, and prompted warnings from health officials. Santa Clarita is about 35 miles north of downtown Los Angeles.

Painfully thick smoke... But thanks to @LACo_FD @LAFD... the Daniel's family home is safe for now. #SandFirepic.twitter.com/Zd0UzAHDo4

"The fire weather and the typical temperatures this year this summer are projected to be higher than normal so it's important that all of our citizens recognize that," Los Angeles Fire Department Chief Daryl Osby said.

The fire began by the 14 Freeway, Osby said, and a cause is under investigation. Ninety percent of wildfires are caused by humans, he said.

California is in its fifth year of a historic drought, creating dry vegetation especially susceptible to catching fire. High temperatures in Southern California and windy conditions were not helping. Some fields have not burned for decades, he said.

It's a touch warm in California today... 🌴🌴🌴🔥🔥🔥 #wildfire#heatwave#LApic.twitter.com/97mxBgxVMp

"Probably 5 years ago, based on our fire behavior, if we had a similar fire we would have probably caught this fire at the ridge," Osby said.