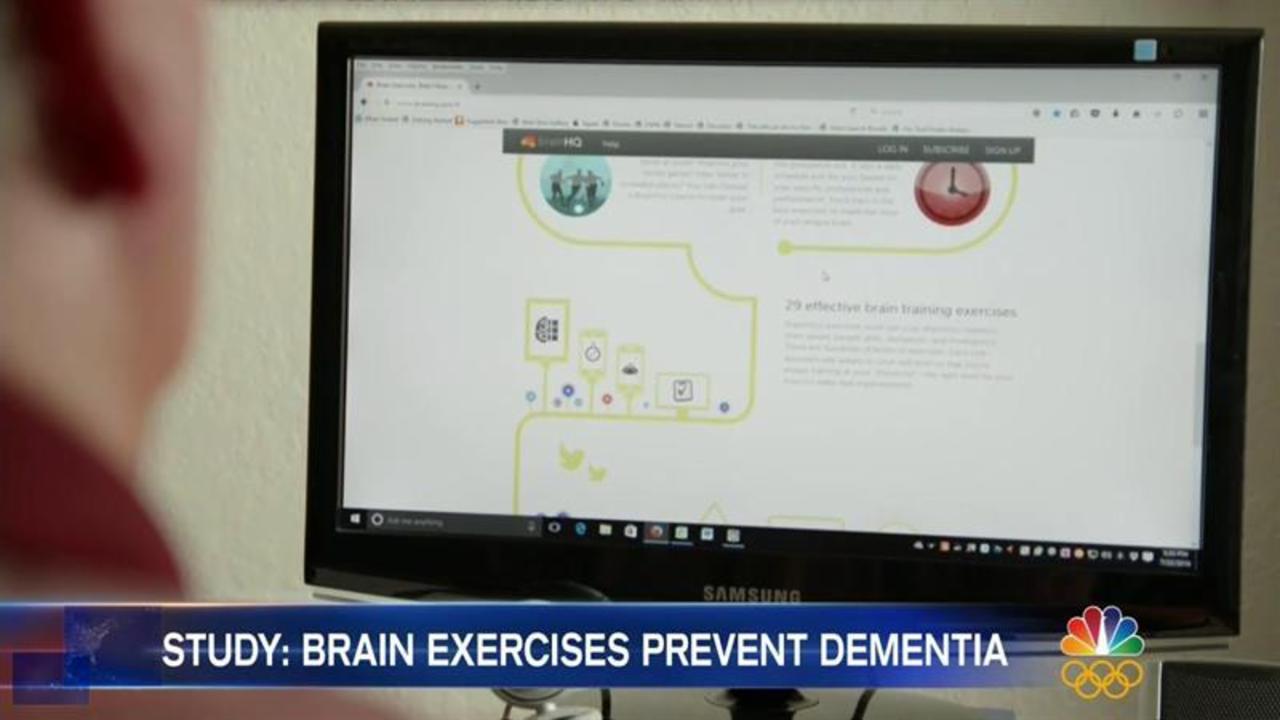 CHICAGO, July 24 (Reuters) - A computerized brain training program cut the risk of dementia among healthy people by 48 percent, U.S. researchers said on Sunday in reporting an analysis of the results of a 10-year study.

The preliminary findings, presented at the Alzheimer's Association International Conference in Toronto, are the first to show that any kind of intervention could delay the development of dementia in normal, healthy adults.

King worked on the original clinical trial on which the new analysis is based. The study, known as Active, examined the effects of cognitive training programs on 2,785 healthy older adults.

Notable people with Alzheimer's
This file photo dated 04 November, 1991 shows US President Ronald Reagan giving a speech at the dedication of the library bearing his name in Simi Valley, California. He was US president from 1981 to 1989 and retreated from public life after it was revealed he was suffering from Alzheimer's disease. (Photo by J. David Ake, AFP/Getty Images)
Glenn Campbell performs during The Goodbye Tour at the Ryman Auditorium on January 3, 2012 in Nashville, Tennessee. (Photo by Ed Rode/Getty Images)
Picture dated 18 May 1991 of US actor Charles Bronson during the 44th Cannes film festival, southern France. Bronson died 30 August 2003 in Los Angeles of complications from pneumonia. (Photo by Gerard Julien, AFP/Getty Images)
392653 01: Actor Burgess Meredith performs in the television show 'The Twilight Zone.' (Photo Courtesy of Sci Fi Channel/Getty Images)
LOS ANGELES - AUGUST 31: Actor James Doohan recieves his star on the Hollywood Walk of Fame August 31, 2004 in Los Angeles, California. (Photo by Mark Mainz/Getty Images)
LONDON, UNITED KINGDOM - JANUARY 17: Malcolm Young of AC/DC performs on stage at Wembley Arena on January 17th, 1986 in London, United Kingdom. (Photo by Peter Still/Redferns)
NORMAN ROCKWELL'S AMERICA -- Pictured: Artist Norman Rockwell -- (Photo by: Gary Null/NBC/NBCU Photo Bank via Getty Images)
Publicity close up of Hollywood actress Rita Hayworth wearing ornately decorated gloves and holding a cigarette in a cigarette holder.
NEW YORK CITY - FEBRUARY 29: Aaron Copeland attends 10th Annual Grammy Awards on February 29, 1968 at the New York Hilton Hotel in New York City. (Photo by Ron Galella, Ltd./WireImage) (Photo by Ron Galella, Ltd./WireImage)
Actor Peter Falk poses as he arrives for the premiere of his new film "Lakeboat" September 24, 2001 in Los Angeles. The film is an adaptation of David Mamet's comic play about a grad student who takes a summer job on a Great Lakes freighter and sees life through the eyes of his low-brow crew members. The film opens in limited release in Los Angeles September 28. REUTERS/Rose Prouser RMP/jp
Estelle Getty (Photo by Jim Smeal/WireImage)
Up Next

Participants were divided into three groups. One got training for memory improvement, one for reasoning and one with computerized training in speed-of-processing.

In the speed training, which emphasized visual perception, individuals were asked to identify objects on a screen quickly. The program got harder with each correct answer.

Participants had 10 one-hour training sessions conducted in a classroom setting over five weeks. Some received four additional "booster" sessions one year after the original training, and four more two years after that.

Scientists measured cognitive and functional changes immediately and at one, two, three, five and 10 years after the training to see if it affected how participants performed daily tasks.

Results of that study, published in 2014, found modest benefits in the reasoning and speed-of-processing groups, but not memory.

The new analysis was by Dr. Jerri Edwards of the University of South Florida, whose mentor, Dr. Karlene Ball of the University of Alabama at Birmingham, sold her rights to the program to Posit Science. Edwards also was a paid consultant for the company for part of 2008.

Edwards did a secondary analysis of the 10-year data, looking at the time it took individuals to develop dementia.

She found that the group that did speed training showed 33 percent less risk of dementia relative to the control group, while the memory and the reasoning interventions offered no such benefit.

People who completed 11 or more speed training sessions were at 48 percent less risk for developing dementia over the 10 years of the study, Edwards said.

"At first blush, that's kind of a big deal," Mayo Clinic Alzheimer's expert Dr. Ronald Petersen said. "This may even be clinically relevant."

In 2014, a group of nearly 70 neuroscientists and cognitive psychologists led by researchers at Stanford University's Center on Longevity and the Berlin Max Planck Institute for Human Development signed a letter saying there was "little evidence" of such results from brain games. The letter was in response to heavy marketing by companies touting the benefits of their programs based on scant scientific data.

Edwards said she was frustrated with the scientific debate, which is one reason she agreed to present her findings before they were published. "I'm sick of our studies being ignored," she said.

King said the training offered in the program was slightly different from the current Posit Science offering and that it was unclear whether speed training would help people who are already at risk for dementia.

"It's a promising result from an interesting data set," he said. "I do think we will know more after the paper is reviewed." (Reporting by Julie Steenhuysen; Editing by Lisa Von Ahn)

More from AOL.com:
Children who practice this hobby are more likely to be successful as adults
People who love to help strangers share the same endearing personality trait
'Drunkorexia' prevalent among college students, study finds