Kaine's crime-busting past may hurt Clinton's outreach to blacks 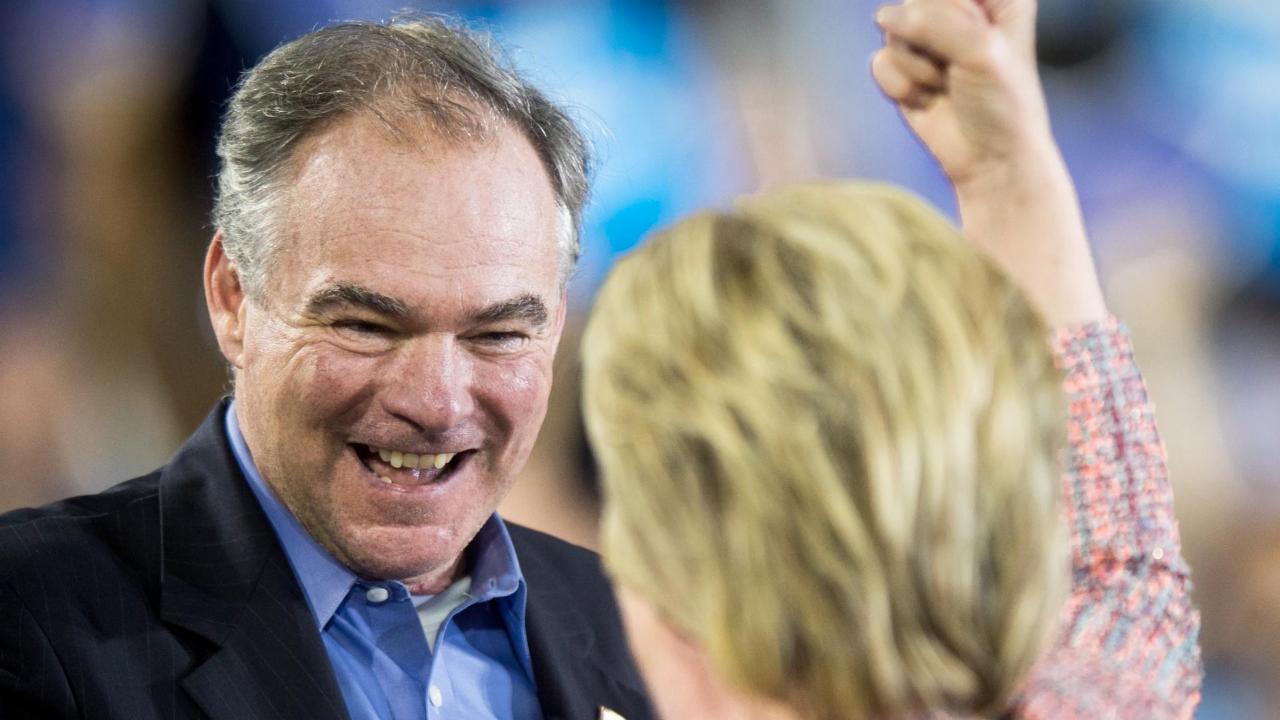 RICHMOND, Va., July 22 (Reuters) - Democrat Hillary Clinton's pick of Tim Kaine as her vice presidential running mate could hamper her efforts to reach out to African-American voters because of Kaine's past embrace of crime-fighting strategies that have driven up the U.S. prison population and are unpopular in the black community.

The now-defunct Project Exile that Kaine backed was so unusual it was championed by Republicans and Democrats alike and by both the top U.S. gun lobby group and gun-control advocates. But the federal program launched in 1997 in Richmond, Virginia, was also criticized at the time as a racially biased initiative that condemned young black men to lengthy prison terms.

Clinton has come under fire herself from black activists for her past support for tough-on-crime policies of the 1990s now blamed for a surge in U.S. prison population and heightened tensions between law enforcement and black communities.

Senator Tim Kaine through his career:

One of her fundraisers got disrupted earlier this year by activists who asked her to "apologize for mass incarceration."

Clinton named Kaine as her running mate late on Friday, making what is considered a safe choice for her battle against Republican presidential rival Donald Trump.

As Richmond mayor from 1998 to 2001, Kaine, 58, was a vocal supporter of Project Exile, crediting it with reducing the city's murder rate.

Its goal was to literally live up to its name by making illegal gun possession a federal, not a state, crime, which allowed prosecutors to send convicted felons, most of them black, to a distant federal penitentiary for at least five years.

"To select somebody like (Kaine) is not a sign of good leadership potential in a president," Sinyangwe said.

Nicole Lee, a civil-rights lawyer and activist in Washington, D.C. who is African-American, also expressed concern.

"Project Exile broke black families," she said. "This is not a benign thing to be for. These measures were not used against white kids in the suburbs with guns, they were used against black kids in the cities."

To defeat Trump in the Nov. 8 presidential election, Clinton needs high turnout among blacks and other minority voters to offset Trump's popularity among white voters.

During the 1990s, she supported tough-on-crime initiatives backed by her husband, former President Bill Clinton, but now vows to "end the era of mass incarceration."

Officials who were in Richmond during Kaine's mayoral tenure believe the community, ravaged by the crack-cocaine epidemic and an escalating murder rate, had to take dramatic steps. Amy Dudley, a spokeswoman in Kaine's Senate office, said the senator stood by the program, believing that it reduced gun violence.

Jerry Oliver, the police chief at the time and an African-American, said the program focused on black communities out of necessity. "We had to be where the problems were," he said.

The National Rifle Association, the nation's biggest gun lobby, was an early proponent of Project Exile as was the gun-control advocacy group Brady Campaign to Prevent Gun Violence.

As Richmond's first white mayor in more than a decade, Kaine was widely credited for helping to bridge racial divisions in the city, but Project Exile drew fire from defense lawyers and community advocates who argued that the program unfairly targeted African-Americans.

Kevin Ring, vice president of Families Against Mandatory Minimums, a Washington advocacy group lobbying against federal sentencing minimums, said that Kaine, like Clinton, will have to demonstrate to black voters that he has "evolved" on the issue.

"There are some that will be bothered. There will be questions," Ring said.

Kaine supports legislation that would roll back some mandatory minimum federal sentences and give judges more discretion, although his office says he still supports firm sentences for illegal gun possession. Kaine's backing of Project Exile also makes him odd bedfellows with Trump, who has made law and order a central theme of his candidacy. Trump has called for the program's revival and his campaign website said it was "tremendous." (Additional reporting by Alana Wise and Emily Flitter; Editing by Caren Bohan and Tomasz Janowski)