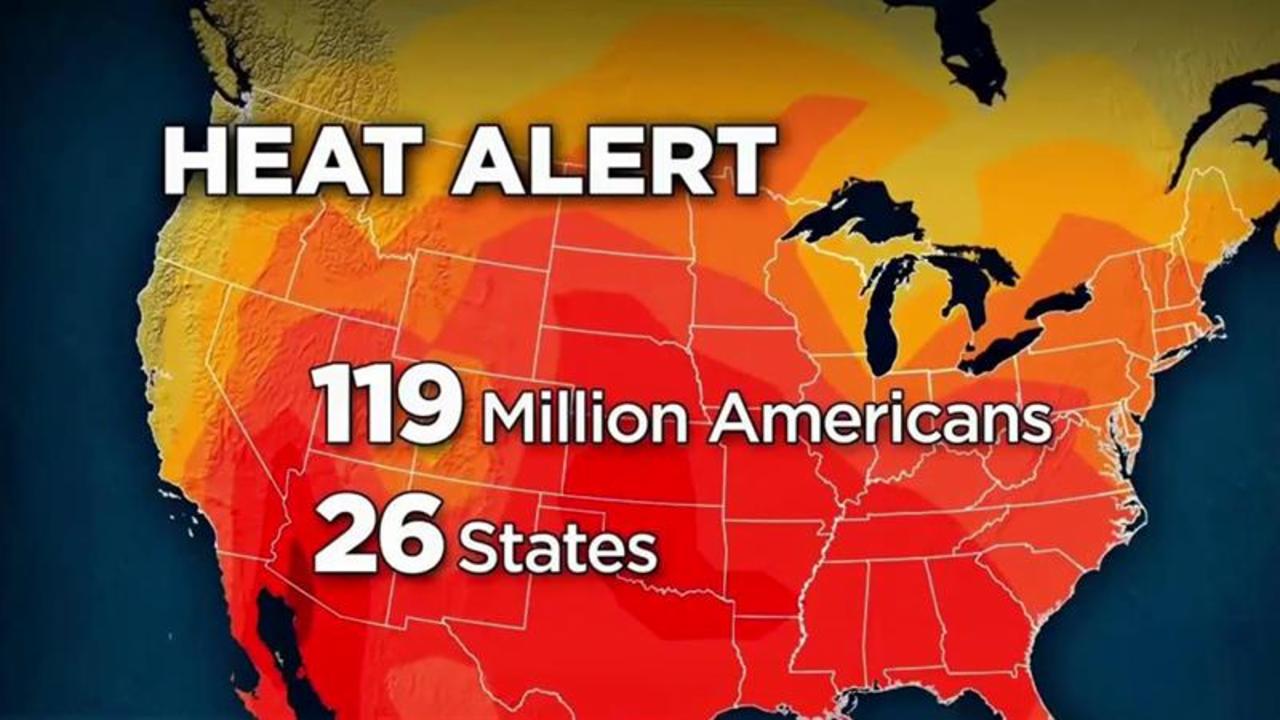 Warnings of blistering temperatures were expanded Friday to include parts of 26 states as a days-long "heat dome" scorched much of the nation, triggering dangerous thunderstorms.

From Austin to Boston, temperatures were forecast to push triple digits, with the heat index — a measure of how hot is feels — reaching 115 degrees in isolated spots. As many as 122 million Americans were under some sort of heat advisory, in an area that stretches 830,000 square miles.

And it could be even hotter on Saturday.

"Saturday looks to be the peak day for the heat on the East Coast," NBC meteorologist Bill Karins said. "The end of the heat wave appears to be with a cold front on Tuesday."

Related: What is a 'Heat Dome'? Everything You Need to Know

The intense weather is the result of an atmospheric phenomenon called a "heat dome" — a ridge, or high-pressure system, that traps hot air underneath it — creating unusually hot and humid conditions.

The heat dome is currently sitting over 100 million people, prompting preparations nationwide. In Chicago, workers were inspecting train tracks to make sure the warm weather wasn't causing any problems, and in New York City, cooling centers were being set up.

NBC New York reported a heat advisory was in effect for New York City and its surrounding counties from noon to 7 p.m. Friday. Forecasters said it was expected to feel like 100 degrees there.

Related: It Just Got So Hot in Baghdad Nobody Has to Work

An excessive heat watch was in effect for most of New Jersey, including Warren and Morris counties, and all counties south of them, from 11 a.m. Saturday until 6 p.m. Sunday.

Chicago beaches being prepped for a busy weekend. #heatwavepic.twitter.com/geVUpZd1l5

On the National Mall in Washington, D.C., temperatures of 100 degrees or above were forecast, along with stifling humidity.

The intense heat was expected to bring strong to severe thunderstorms, with damaging wind gusts and large hail, to major Northeast cities Friday and Friday evening, including the I-95 corridor, before the storms shift back to the Upper Midwest for the weekend, according to the Weather Channel.

Torrential downpours may cause flash flooding in some areas, it said.

In the Dakotas, a few tornadoes are possible Friday, Karins said.

Much of the nation will start to cool off by Monday, with full relief forecast by Thursday, TODAY meteorologist Al Rokers said.

"But until then, it is going to be brutal," he said.

Weird summer weather throughout U.S.
LAKE MEAD NATIONAL RECREATION AREA, NV - AUGUST 03: The ruins of the Hannig Ice Cream Parlor are shown in the ghost town of St. Thomas on August 3, 2015 in the Lake Mead National Recreation Area, Nevada. The town was founded in 1865 by Mormon pioneers at the site where the Muddy River flowed into the Colorado River and at one point had about 500 settlers. The town was abandoned in 1938 after the construction of the Hoover Dam caused the Colorado River to rise. The area was once submerged in 60 feet of water but became entirely exposed to the air as a severe drought in the Western United States over the last 15 years has caused Lake Mead to drop to historic low levels. (Photo by Ethan Miller/Getty Images)
UNITED STATES - JULY 30: A severe thunderstorm passes over the U.S. Capitol on Thursday, July 30, 2015. (Photo By Bill Clark/CQ Roll Call)
NEW YORK, NY - AUGUST 17: People enjoy a hot afternoon at the Astoria Pool in the borough of Queens on August 17, 2015 in New York City. The main pool, the biggest in New York City and administered by the New York City Department of Parks and Recreation, sees over 3,000 people on a typical summer weekday. New York city is in the middle of a heat wave, with temperatures in the high nineties and with a heat factor making it feel over 100 degrees. (Photo by Spencer Platt/Getty Images)
Up Next

More from NBC News:
What Is a 'Heat Dome'? Everything You Need to Know
'Heat Dome' Will Make Parts of U.S. Feel Like 115 Degrees
We May Have Been Looking in Wrong Place for MH370: Search Firm