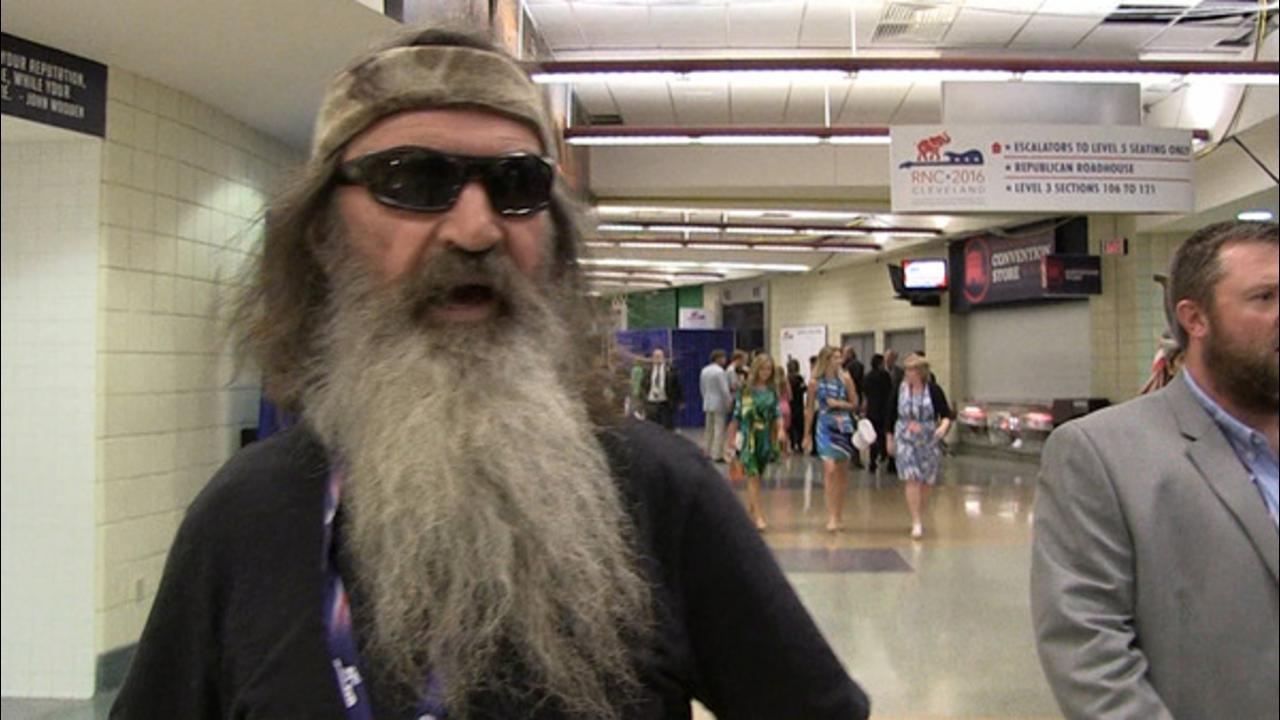 Duck Dynasty star Phil Robertson got candid with The Hollywood Reporter at the Republican National Convention in Cleveland on Thursday on a variety of topics, including Donald Trump, his new faith-focused film and being briefly "fired" by A&E.

During an interview with The Hollywood Reporter's Paul Bond, Robertson was asked if he were bothered that Ted Cruz didn't endorse Trump for president. "No. When you get to be a grown man, you make decisions for yourself. So he decided not to endorse Trump, but that was his call," Robertson said. "So me, just a fellow Republican, I would've endorsed him, already have. Mr. Trump's name is the one on the ballot. Mr. Cruz, his name is not on the ballot."

The reality star also opened up about his documentary film, Torchbearer, set for nationwide release in August.

Torchbearer opens with clips of celebrities and media throwing labels at him, — including "homophobic," "white trash" and "hillbilly" — but the patriarch isn't bothered by the name calling. "You've got to remember, going in, Jesus told his disciples 'blessed are you when they hate you, when they exclude you...; when they insult you and they reject your name as evil. Great is your reward in heaven. Leap for joy.'"

See photos of Phil Robertson and his family:

"Torchbearer is a look at what happens historically to empires and nations when they do not think it worthwhile to retain the knowledge of God. That's where it starts," the A&E star said." Robertson, who is hopeful that non-Christians will turn out to see the project, added of the film, "We're dealing with reality here. This is what's happened in these empires over and over and over."

Three years following Robertson's suspension from the A&E program for remarks he made in a GQ profile about the LGBT community, he isn't holding any grudges against the network.

"Remember, they fired me for nine days one time, but I never called them and said, 'what in the world, you fired me?' I didn't say a word. I just thought, 'hey, it happens.' They came back to me after nine days and apologized for firing me and I said, 'did you ever get an irate phone call from me about the firing? And they said, 'well, we actually didn't fire you. We listed it as we put you on indefinite hiatus," Robertson said. "So I looked up hiatus in the dictionary and it said, 'a gap in the proceedings,' meaning I wasn't there anymore."

Now going into its 11th season, the oldest castmember of the A&E series said: "I didn't hold it against them."

Watch the full interview below.