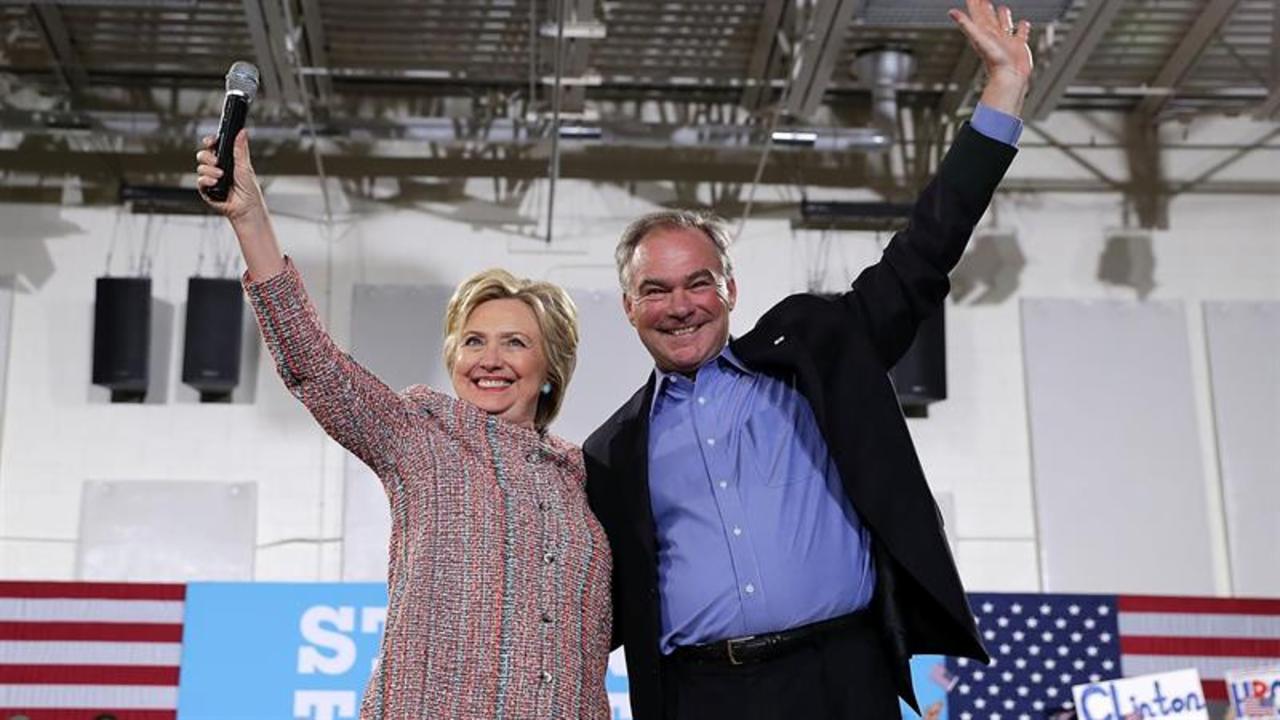 WASHINGTON (Reuters) - Hillary Clinton named U.S. Senator Tim Kaine as her running mate on Friday, making a safe choice that will help her present the Democratic ticket as a steady alternative to the unpredictable campaign of Republican presidential rival Donald Trump.

The selection of Kaine, a self-described "boring" Virginian with wide governing experience and a reputation for low-key competence, could appeal to independents and moderates but could also anger liberal groups that object to his advocacy for an Asian free-trade pact.

I'm thrilled to announce my running mate, @TimKaine, a man who's devoted his life to fighting for others. -H pic.twitter.com/lTVyfztE5Z

But the Spanish-speaking former Virginia governor and Richmond mayor fits Clinton's long-stated criteria that the vice presidential choice be a capable partner who is ready to take over the presidency if necessary.

Clinton made the announcement via Twitter and a text message to supporters after the first day of a two-day campaign swing in Florida. She called Kaine to tell him about 40 minutes before the announcement, and called President Barack Obama shortly after Kaine.

"I'm thrilled to tell you this first: I've chosen Sen. Tim Kaine as my running mate. Welcome him to my team," she said in her text message.

Kaine, 58, edged out two other finalists - Cory Booker, a U.S. senator from New Jersey, and Agriculture Secretary Tom Vilsack, according to a Democratic source familiar with the discussions.

See more of Kaine through the years:

The former secretary of state will be formally nominated as the party's presidential candidate for the Nov. 8 election at next week's Democratic convention in Philadelphia. She leads Trump in many opinion polls.

Clinton's choice of a running mate could give her campaign momentum heading into the convention, as the fight for the White House begins a more than three-month push to the finish.

Clinton acknowledged in an interview earlier this week that even Kaine admits he is boring, and said she did not mind.

"I love that about him," she told Charlie Rose of CBS News and PBS. "He's never lost an election. He was a world-class mayor, governor and senator and is one of the most highly respected senators I know."

Kaine's first appearance with Clinton will be on Saturday at an event in Miami, a campaign aide said.

Liberal groups, which had pressured Clinton not to pick Kaine because of his support for fast-track authority for the White House to negotiate the Trans-Pacific Partnership, were dismayed by the choice.

Critics of the Asia free-trade deal, including Trump and Clinton's Democratic primary rival Bernie Sanders, say it would be unfair to U.S. workers and kill jobs. Clinton praised the deal when she was secretary of state, but has since distanced herself from it.

"Republicans will run hard against Democrats on trade this year. Unfortunately, since Tim Kainevoted to fast-track the Trans-Pacific Partnership, Republicans now have a new opening to attack Democrats on this economic populist issue," said Stephanie Taylor, co-founder of the Progressive Change Campaign Committee.

Hispanic activists also may be annoyed with the pick of Kaine given that Latino candidates were again passed over.

But Kaine could help Clinton in Virginia, a heavily contested swing state, and choosing Kaine will not cost Democrats a seat in the Senate, where Republicans now hold a majority, at 54 seats. Virginia's Democratic governor, Terry McAuliffe, a close Clinton friend and ally, will name a replacement for Kaine if he and Clinton win the White House.

Kaine has good relations with senators from the opposing party, according to senior Senate Republican congressional aides. One aide speculated Kaine would be effective in reaching out to congressional Republicans if he becomes vice president, a role that Vice President Joe Biden has played for Obama.

Kaine, a member of the Senate Foreign Relations and Armed Services committees, has been a leading voice calling for a formal authorization of war against the Islamic State militant group. He played an important role in securing congressional review of the 2015 international deal on Iran's nuclear program, although he eventually backed it.

He has a track-record of backing liberal causes such as ending across-the-board automatic budget cuts and providing a pathway to citizenship to millions of undocumented immigrants.

Kaine, a Catholic who became fluent in Spanish speaker while serving as a missionary in Honduras, has expressed personal opposition to abortion, but has a public record in support of abortion rights.