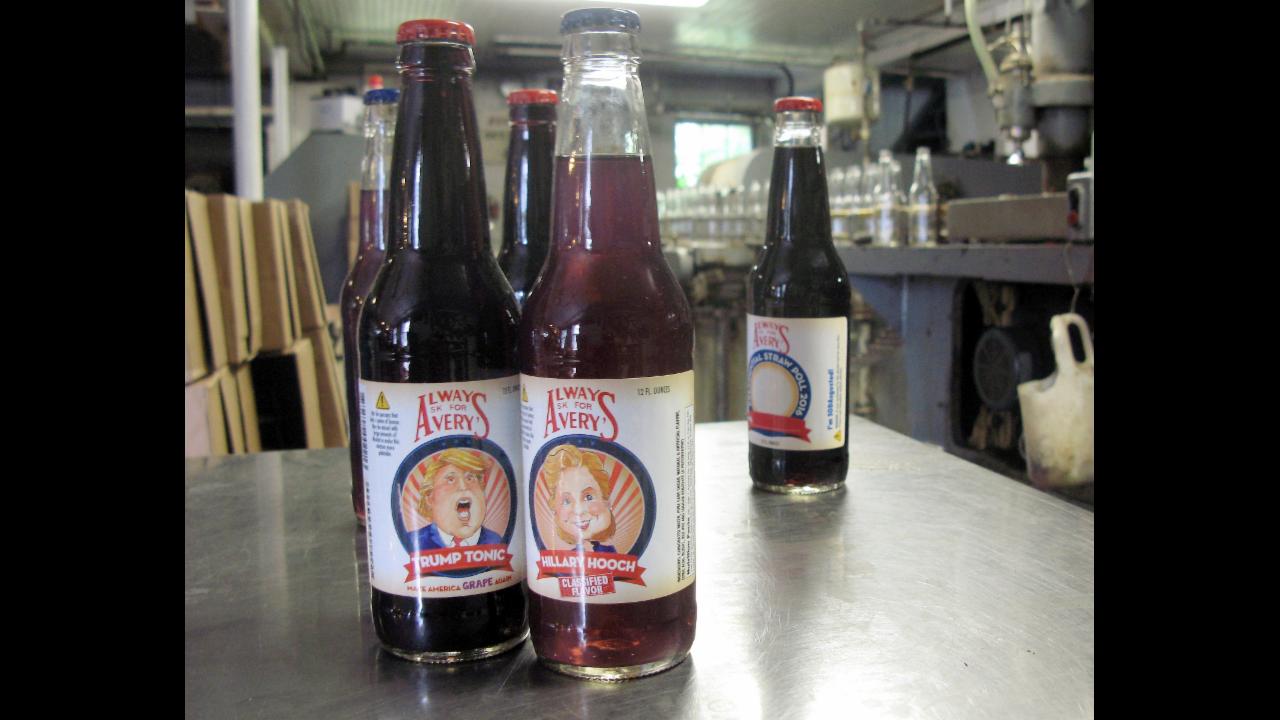 If you were a soda, what flavor would you be?

It may not be a common question at the presidential debates, but one Connecticut soda maker is putting it to a popular vote (Hillary Hooch or Trump Tonic?) and sales are bubbling over.

For the third election cycle in a row, Avery's Beverages, a 112-year-old soda maker in New Britain, Connecticut, has introduced new flavors that represent presumptive candidates for president. Trump Tonic--a grape soda with the tagline "Make America Grape Again"--has an added acidity, in a nod to Trump's often caustic rhetoric. Hillary Hooch is a berry soda--a combination of raspberry, strawberry, and a hint of sour lemon--but its exact ingredients are "classified," says Avery's operations manager Will Dunn.

Presidential sodas, along with a few other new products, have been a nice financial boost for what used to be a lagging piece of Avery's business, Dunn says. Before current general manager Rob Metz took over, the company offered only a few basic flavors, like cola and ginger ale. Five-gallon bottled water deliveries dominated sales, and there was talk of dropping the soda business altogether.

#RNCinCLE
THANK YOU #AMERICA! WE DID IT! What a way to secure the nomination- with my kids putting US ALL over the top with #NewYork! I l#love you @ivankatrump, @tiffanytrump, @donaldjtrumpjr, & @erictrump! #TrumpTrain #Trump2016
Good morning from #Cleveland! @robinrobertsgma and @gstephanopoulos have all your #RNCinCLE coverage this morning and all week long! 🇺🇸🇺🇸🇺🇸🇺🇸🇺🇸🇺🇸🇺🇸🇺🇸🇺🇸🇺🇸🇺🇸🇺🇸🇺🇸
Delegación de Texas #rncincle
Ready for the Republican National Convention. #RNCinCLE
Almost showtime. #RNCinCLE #RNC1210
#RNCinCLE #rnc
A frivolous lego model seems oddly fitting for the start of #RNCinCLE #DailyLegoChallenge
Thank you to everyone who watched my speech last night! #gopconvention #RNCinCLE looking forward to tonight! ❤️🇺🇸
Tom Morello participates in the #rncincle #protest march into downtown #Cleveland #CLE
So it begins... #RNCinCLE  #RNCToday #RNC #RNC2016 #gopconvention  #GOPinCLE #GOP #Convention2016 #republicannationalconvention
Just had my first Vermin Supreme sighting at the #rncincle #rnc
Day 1 of #rnc #cleveland - just one of many anti-Trump marches to come. Spoke to Chuck D, veterans, immigrants rights groups, revolutionary communists, and so much more. #rncincle
Such an honor to speak at the @gopconvention #RNCinCLE
🇺🇸 #RNCinCLE #gopconvention
Great photo! #Repost @donaldjtrumpjr ・・・ Watching America's Mayor Rudy Giuliani bring down the house last night with his wife Judith, Sen Bob Dole, @mike.pence and his wife Karen #TrumpPence2016 #makeamericagreatagain #Trump2016 #rncincle
About to go on @foxnews with @seanhannity talking #rncconvention2016 #rncincle #Trump2016
With my siblings and the delegation from NY as my father officially becomes the Republican nominee for President of the United States of America! What a surreal and unforgettable moment! 🇺🇸 #RNC #RNCinCLE #2016Cle
Cool shot of me finishing up my speech last night. Despite the pressure I had a great time speaking about @realdonaldtrump #TrumpPence2016 #makeamericagreatagain #Trump2016 #Cleveland #rncincle
We have to provide a safe environment for the generations ahead! Huge thank you to @americanunityfund and @m_hoov for inviting me to their #bigtentbrunch at #RNCinCLE. We need to keep having these conversations #trans #lgbt #republican
These sneakers! Meet 18-year-old Sam Burke from Orange County, CA. He's dressed head-to-toe in 🇺🇸 and supports #DonaldTrump because, "he stands up for Americans, puts Americans first, and is a real person." Sam is a first time voter, and to him, terrorism is the most important issue to him during this campaign. #RNCinCLE #gopconvention #2016 #cleveland
Live on set at the #RNCinCLE
Speaker Ryan is introducing Mike Pence (the VP nominee) #RNCinCLE #gopconvention
I found the #Texans #RNCinCLE #🐘 #Texas
The floor of the #RNCinCLE on night 3. #politics #ohio #cleveland
Night 3 of the #RNCinCLE. Laura Ingraham is dealing out all the red meat. Folks are losing their minds. My Lord, someone is about to have a heart attack in here.
RNC day 3 downtown. Riot Bike Police Officers blocking protesters near East 4th. #cleveland #cle #clevelander #clevelandgram #clevelandphotographer #rnc #rnc2016 #rncincle #republican #ohio #ohioexplored #ohiophotographer #justgoshoot #igdaily #canon #canon_photos #canonphotography #canonbringit #canon1dx #1dx #summer #downtown #dangerous #documentaryphotography #police #leo #backtheblue
Up Next

But in 2008, the company decided to have a little fun with the election by introducing Barack O'Berry and John McCream. Then the 2012 election inspired Crème De Mitt. The flavors were so popular, Dunn says, that Avery's started creating sodas for other news events. Linda's Smackdown Soda and Dick's Blue Menthol sold during Connecticut's 2010 senate race between Democrat Dick Blumenthal and Republican Linda McMahon. When Osama Bin Laden was killed by U.S. forces in 2011, Avery's sold a blood orange soda called So Long Osama. And the New England Patriots "Deflategate" scandal inspired Deflated Ball Brew.

More From Inc.com: 8 Signs an Employee Is Exceptional (Which Never Appear on Performance Evaluations)

It's not hard to see why Avery's keeps doing this. This month, Dunn says, sales from presidential sodas boosted company revenue by 30 to 35 percent.

"Totally gross" sodas also helped save Avery's bubbly beverages. Flavors like Monster Mucus and Bug Barf ("They're SODAsgusting!" according to the website) are created by kids during Make Your Own Soda tours on Saturdays at the red barn. Swamp Juice, the original gross soda, is a mix of all the fruits. "It looks like bog water, but tastes like Skittles," says Dunn.

Dunn says inquiries about presidential sodas start in January of election years, and as soon as Avery's announces the launch, orders start flying in, especially from vendors like regional grocer Stew Leonard's. (Local sales for Trump Tonic have been slightly higher than Hillary Hooch, but Dunn says national orders have Trump Tonic winning by a landslide.) Keeping up with demand can be challenging for the small plant, which bottles all soda and water onsite in a red barn from the 1880s. Its bottling equipment is 60 years old and Dunn says, though it works just fine, they produce about as much in one day as Coca-Cola does in an hour. "But we have no desire to modernize," Dunn says. "Nostalgia and quality, natural ingredients--that's what's important to us."

More From Inc.com: Do You Listen to Music While Working? Here's What It Does to Your Brain (and It's Pretty Awesome)

This year the presidential sodas are more popular than ever. "In the words of Donald Trump, 'This one is going to be huge,'" Dunn says.

As you might guess, the company ran out of Trump Tonic on Monday, the first day of the Republican National Convention in Cleveland. Dunn thinks people are so fed up with the political shenanigans that they need some comic relief.

But when asked whether he prefers Hillary Hooch or Trump Tonic, Dunn says neither. Like many people this year, he thinks neither option is quite right. That's why Avery's is also offering a soda with a blank label, letting customers write in another option. Thus far, nominations have ranged from Bernie Sanders to Libertarian Gary Johnson to TV's boy genius Jimmy Neutron.

More on Inc.com:
At This Small Bookkeeping Company, Employees Can Skip Meetings to Go to the Gym
How Business And Tech Reacted to Trump Choosing Governor Michael Pence
A New Generation of Entrepreneurs Is Out to Save the World--and Make Money Doing It