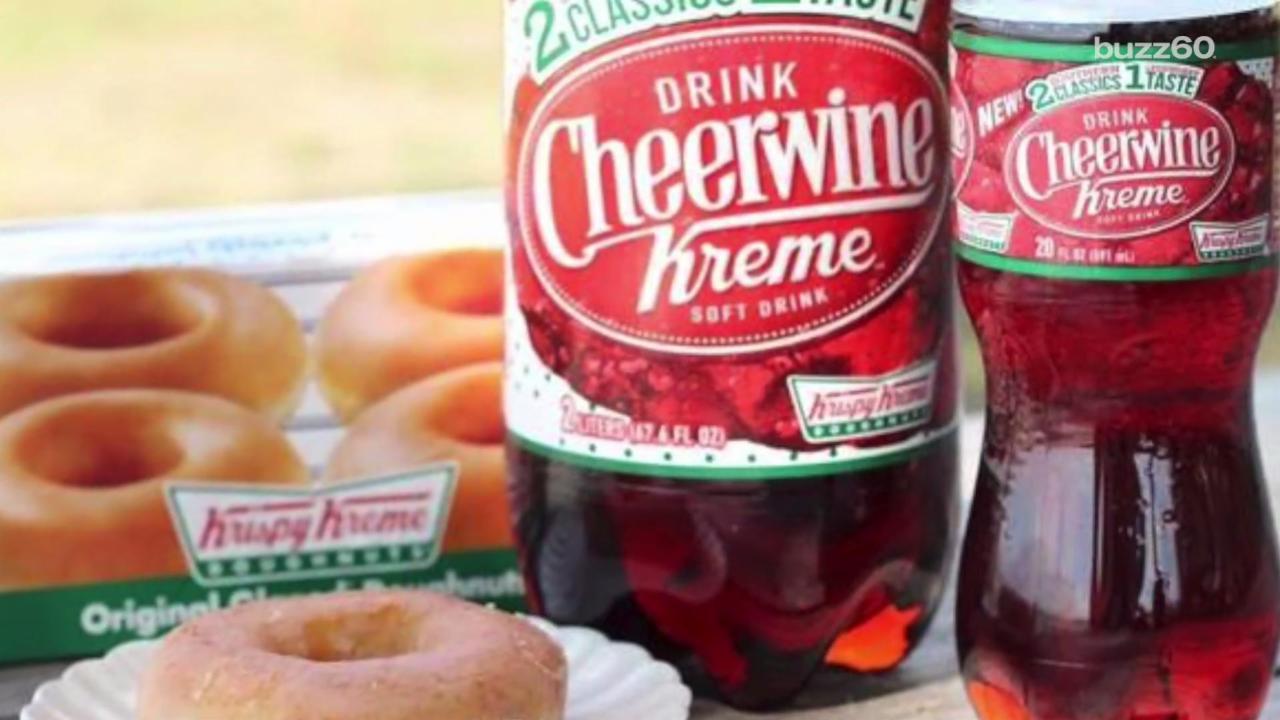 Krispy Kreme Doughnuts (ticker: KKD) has done what will likely anger health advocates everywhere — but leave investors with an appetite.

The chain, which announced in May that it would be acquired by European investment fund JAB Holding Co. and taken private, teamed up with soft-drink bottling company Cheerwine, also based in North Carolina, for the aptly titled Cheerwine Kreme.

Unfortunately, this treat is only available for those in North Carolina, South Carolina and certain areas of Georgia in convenience and grocery stores and Krispy Kreme eateries.

USA Today also notes the companies worked together in 2010 for a limited time Cheerwine-filled doughnut.

Food brands Americans trust the most

Why people trust it: Betty Crocker baking products are staples in most American households.

Why people trust it: Kraft committed to stop putting artificial ingredients in its macaroni and cheese this year.

Why people trust it: The company claims its products have strong flavors and that they're easy to drink.

Why people trust it: All Minute rice products are grown in the US.

Why people trust it: Hellmann's Real mayonnaise is made with just three ingredients — vinegar, eggs, and oil.

Why people trust it: The brand is authentic. The products the company manufactures in the US are made with the same machines as the products made in Italy.

Why people trust it: Wonder Bread has been a classic household name brand since 1921.

Why people trust it: Hershey's is the leading manufacturer of chocolate, mint, and gum in North America. The company is transparent about its ingredients. It primarily uses milk, almonds, cocoa beans, and sugar in its products.

Why people trust it: JIF sells a variety of peanut butters, including reduced fat, low sodium, and more.

Why people trust it: Old El Paso offers a complete line of Mexican meal components that are common in many households.

Why people trust it: According to Campbell, 95.8% of households have a Campbell product in their kitchens. The company believes its popularity is because of its transparency.

Why people trust it: Land O'Lakes claims that its simple ingredients have set the standard for quality butter since the 1920s.

Why people trust it: Trident gum is known for its claim to clean and protect teeth.

Why people trust it: Tropicana's orange juice is rich in nutrients, and advertises that its products go from "grove to glass." Most of its juice products have an impressive 100% daily value of Vitamin C.

Why people trust it: Heinz ketchup has been free from artificial preservatives since 1906.

Why people trust it: French's mustard is America's number one brand for mustard. It's committed to using simple and clean ingredients.

(Photo by Richard B. Levine via Alamy)

Why people trust it: McCormick is known for producing many popular and unique spices. The company also offers low sodium and gluten-free options.

Why people trust it: Breyers, which is owned by Unilever, is committed to selling products with "All-American dairy" and "naturally sourced flavors and colors."

(Photo by Richard Levine via Alamy)

Why people trust it: Coca-Cola includes Diet Coke, Coke Zero, Sprite, and Fanta soft drink products and is transparent with its ingredients.

The food industry hasn't shied away from mixing things up to entice consumers, even if they're bucking against the healthy eating trend. Because if one thing is going to keep consumers interested in anything, it's a surprise. Exhibit A: Kellogg Co.'s (K) soda-flavored Pop-Tarts.

JAB, which also owns Keurig Green Mountain, the maker of single-serving coffee makers and K-cup coffee pods, is buying Krispy Kreme for $1.35 billion, or $21 per share in a transaction that is expected to close in the third quarter.

KKD stock has traded right at $21 since the sale announcement, and was unchanged in late morning trading on Wednesday.

8 Stocks to Profit From America's Love of Burgers

8 of the Most Incredible Investments of the 21st Century