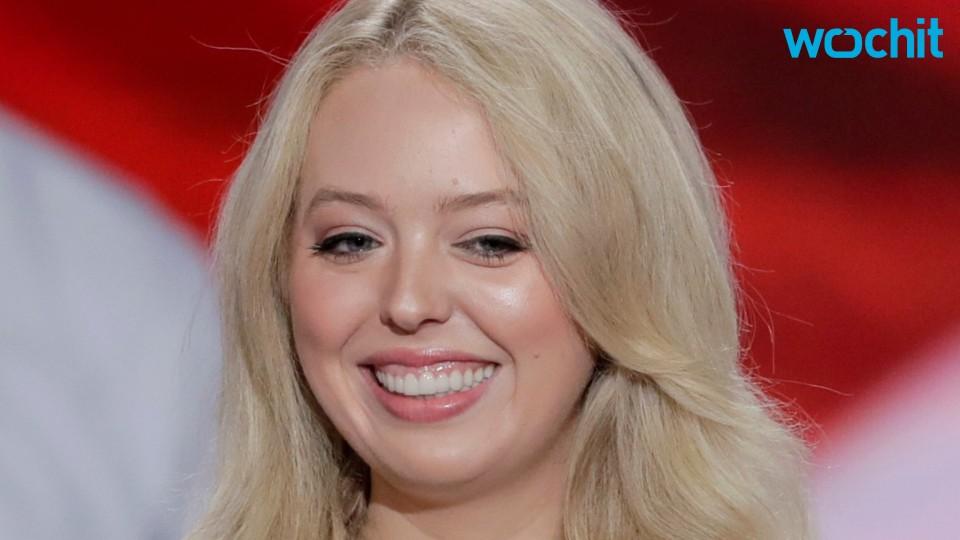 Unlike her older half-sister Ivanka, 22-year-old Tiffany has avoided the spotlight throughout her father's controversial campaign. She's been present at multiple Trump events and has been interviewed alongside her siblings, but hasn't yet given an individual speech.

But that has changed. Take a look at what we know about the potential first daughter.

Tiffany Trump's hottest Instagrams
Wishing my big sister and best friend a happy birthday (sorry for the late post, but you know my law school life haha) I love you so much! ♡♥︎♡ @ivankatrump
Wishing everyone a happy and peaceful year to come! 💕
Good things come in blue packages, no better way to spend my roulette winnings than on this bae 💋👑💎
On the wings of a dove.. 👑🕊👑
🎈#fridaythe13th #birthday
💙
🥊 #MayweatherMcGregor #fighttime
⛵️
💕
🔙 with the best
“Don’t count the days, make the days count.” - #MuhammadAli
It was an honor attending the 75th Anniversary of Battle of the Coral Sea with my family and Australia's Prime Minister Malcolm Turnbull and Mrs. Turnbull ✨
I'm so proud of my big sister @IvankaTrump on the launch of her #WomenWhoWorkBook! I can't wait to start reading it! 📖
🌸🌷🌼
💐🐰🌷 #EasterEggRoll
Happy Easter everyone! 🐰🥕
The cold never bothered me anyway ❄️☃️
💙
❣️🌹
🇺🇸
What an amazing evening! So grateful for all of the support! Looking forward to today 🇺🇸 Thank you @anne_bowen
Wishing everyone a happy and healthy 2017 🌟
⚓️
🐶🎀
Happy birthday @itsmarlamaples I ❤️ you to the 🌝and 🌎🔙
Contemplating 💭
🗽 @anne_bowen
💃🏼
"The positive thinker sees the invisible, feels the intangible, and achieves the impossible" #winstonchurchill @scottnathanphoto
Midterms ✔️
💭💬🗯
Already miss kitty-sitting this little prince 🍼🐱 #nugget #meow
🕔 flies #senioryear
Leather black and eyes of blue 🎶 #lanadelrey
A fearless woman looks a challenge dead in the eye, and gives it a wink.
Up Next

1. She's the only daughter of Donald Trump and Marla Maples. Tiffany is Donald Trump's only child by his second wife, actress Marla Maples. She was born in New York but grew up in Los Angeles, raised primarily by her mother. Tiffany has said they have a "very close" relationship.

Trump and Maples, whose relationship began while Trump was still married to his first wife, Ivana, were married from 1993 to 1999.

Happy Mother's Day! @itsmarlamaples I'm so blessed to have such an inspiring and loving mother like you! 💕

2. She's an Ivy League graduate. This May, Tiffany graduated from the University of Pennsylvania, where she studied sociology and urban studies and was a member of Kappa Alpha Theta sorority.

Donald Trump also graduated from the University of Pennsylvania — he earned a degree from the Wharton School of Business in 1968. Tiffany is the third Trump child to attend the school.

4. She once wanted to be a pop star. When she was 17, Tiffany recorded a single, "Like a Bird," and told Oprah Winfrey that music was a "big passion" and that "we'll see in a couple of years if I want to take it to the next level as a professional."

All about those snapchat filters

7. She has a boyfriend. Tiffany has been dating a Penn student named Ross Mechanic for several months, according to their Instagram accounts. He even attended the first night of the Republican National Convention.

Ross is a rising senior studying computer science, and is currently interning at CADRE, a startup founded by Tiffany's brother-in-law Jared Kushner.

Ross is the son of Jonathan Mechanic, a wealthy New York real estate lawyer. The Daily Mail has reported that Ross and his family are registered Democrats.

8. She supports her father's presidential campaign. "He's true to himself," she told ABC last year. "And he speaks in a way that the average person can understand. I think that's refreshing for everyone."

🇺🇸 Congrats @realdonaldtrump on your announcement! So proud of you! #MakeAmericaGreatAgain

More from Business Insider:
This relatively unknown town in Florida has become a playground for the richest of the rich
Domino's new burger-pizza hybrid is unlike anything we've ever seen
New York's tallest and fanciest apartment building will have its own private restaurant from a Michelin-starred chef