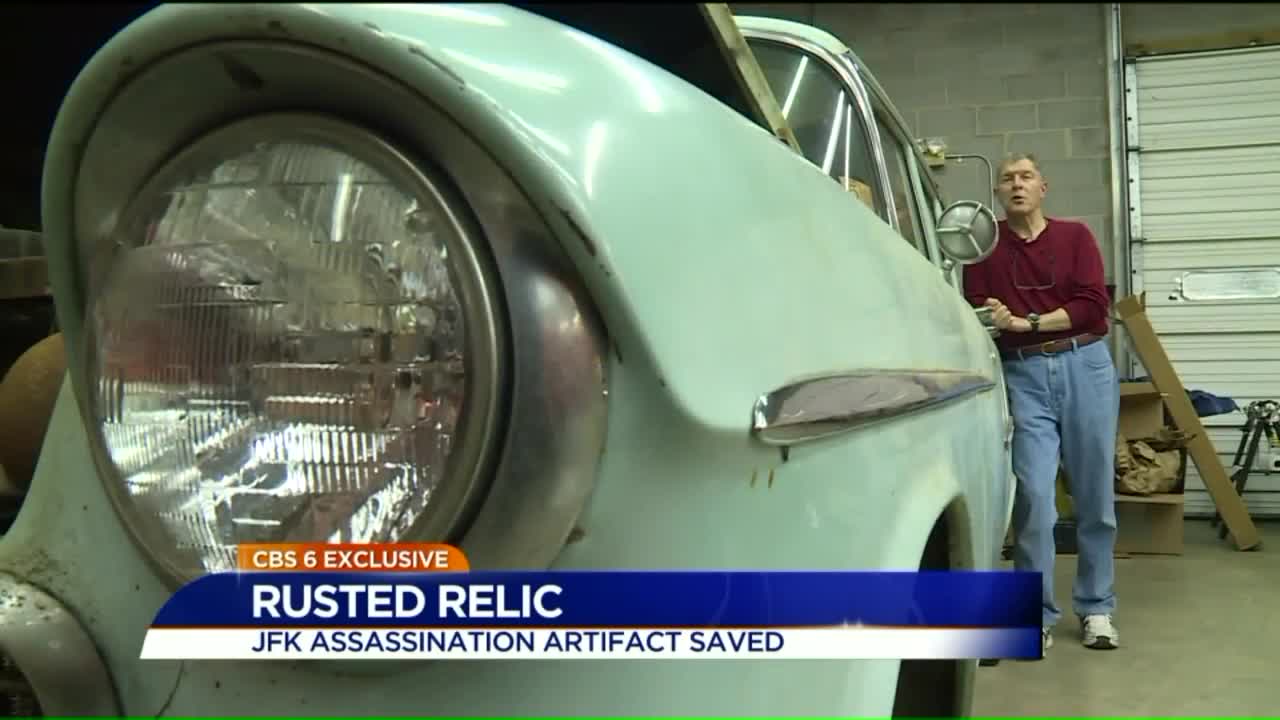 CHESTERFIELD COUNTY, Va. (WTVR)-- Inside his two garages in Chesterfield County, clients from across the country trust Frank Badalson with their worthy investments.

Badalson restores cars, something he says fuels his inner drive.

"Right now I am living my dream and working on good old American Muscle Cars," he said.

But there is one special car in his garage that he never thought he would get.

The car is an infamous piece of American history linked to the assassination of John F. Kennedy in 1963.

Some say the prized possession looks better suited for a junk yard, but that doesn't matter to Badalson.

"You could say it is in poor condition," he said. "Windows are broken. It doesn't run."

Despite the visual flaws, Badalson said he sees nothing but beauty in the Chevy Bel Air. That and a long history dating back to one of the most infamous moments in American history.

Photos of Lee Harvey Oswald's car sitting in a garage:

This 61-year-old station wagon was once owned by Ruth Paine.

"A lot of people may know the name if they know anything about the Kennedy Assassination."

"It is the only known verified vehicle that we know of that Lee Harvey Oswald drove."

In the weeks leading up to the President's death the battered station wagon carried Oswald's mysterious duffel bugs.

"Mainly the rifle used to kill President Kennedy was transported in this car on many occasions," Badalson said.

That's why he said he jumped at the chance spending more than $10,000 to own one of the last cars linked to that fateful day in November of 1963.

"To think that Lee Harvey Oswald sat right here where I'm sitting. Put his hands on this steering wheel and turned the ignition.... and drove this car," he reflected.

Not long after the assassination Ruth Paine sold her Bel Air to her next door neighbor.

Reports say the car held bad feeling for her after Kennedy's assassination.

The car deteriorated after sitting more than 50 years. That is until it went on the auction block in 2015.

"It is in poor condition but we're lucky that it still exists," Badalson said.

Although Badalson jumped at the chance to get his hands on the historic vehicle, not everyone holds it in such high regard.

"There have been several people to stop by and look at this.... Didn't want to get closer than two feet..." he said.

While refurbishing vehicles is his specialty Badalson said he's leaving his new pride and joy as is.

"I personally could never be talked into restoring this car," he said "That to me would ruin what I call the DNA of the car."

For Frank Badalson the special car is the one that stands out among any of his other vehicles.

"In the meantime I just sit here quiet with it and it is my little piece of history."

Before opening his restoration business, Frank Badalson served with the Chesterfield Police Department from 1978 to 1991.