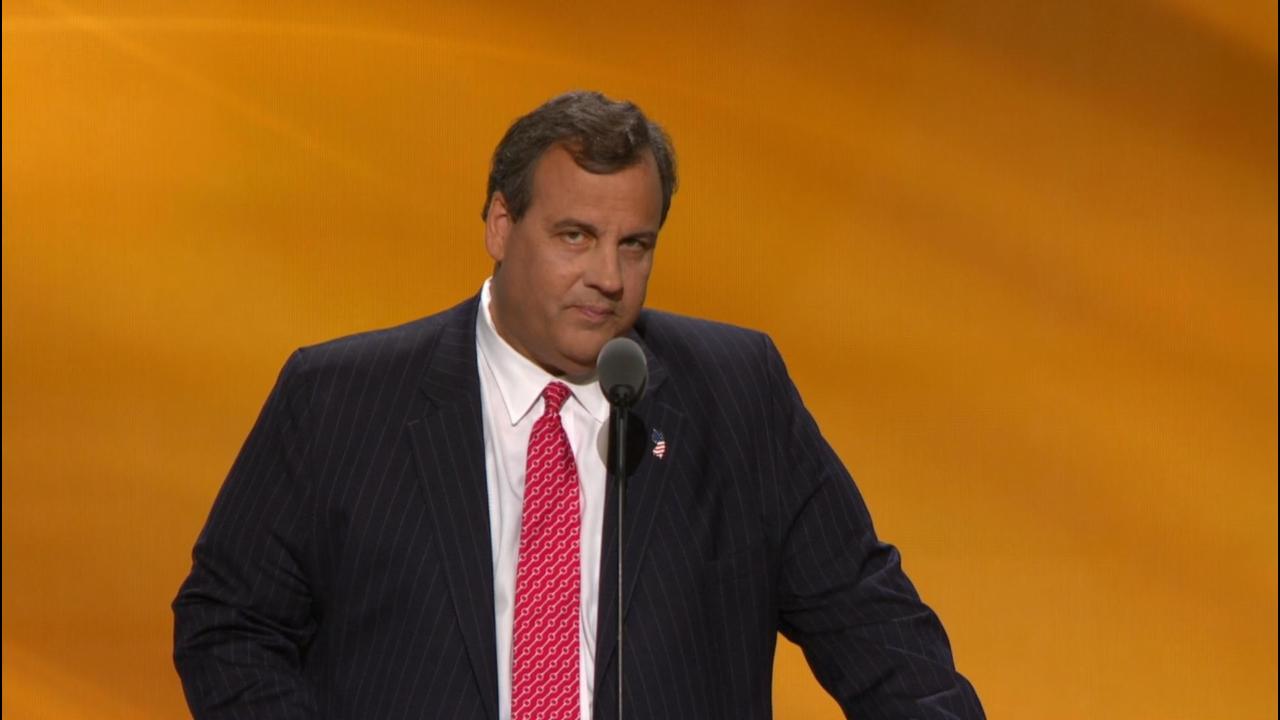 Citing his experience as a prosecutor, Christie laid out a case against Clinton, criticizing her for a "failure for ruining Libya and creating a nest for terrorist activity by ISIS" and the debacle surrounding her private email usage.

As he made each point, he asked the crowd if she was guilty or not guilty, inspiring a loud "guilty" response each time.

The rousing speech inspired the crowd to chant "lock her up" repeatedly.

Christie ripped Clinton for saying the United States should "strengthen Russia" and for her role in negotiating and supporting the Iranian nuclear deal. He also suggested that as an "apologist for an Al-Qaeda affiliate in Nigeria" she was responsible in part for the kidnapping of girls by Boko Haram.

Christie was especially brutal in his assessment of the presumptive nominee's email scandal.

RELATED: See some of the wildest reactions to Christie's speech:

Social Reactions to Chris Christie's RNC Speech
If you think Chris Christie can lecture anyone on ethics, we have a bridge to sell you. https://t.co/c1nkZojJFL #RNCinCLE
Christie throwing serious heat. Equivalent to a pitcher hitting 100 mph on the radar gun. These are the convention speeches people remember.
chris christie is the gil of politics https://t.co/owhMILxqSP
.@ChrisChristie absolutely crushed it tonight in his scathing indictment of @HillaryClinton at the #RNCinCLE
Just listened to Christie. The Republicans really have become the party of hate. Nothing like my Mom and Dad growing up.
chris christie is just straight-up holding a witch trial
This is a photo of Chris Christie and Hillary Clinton hugging on a CNN set in FEBRUARY. #RNCinCLE https://t.co/tuiX2ha5w6
OMG, this is Chris Christie's attorney general job audition.
I didn't realize they were doing a Roast of Hilary Clinton hosted by Chris Christie tonight...
Both Chris Christie and Donald Trump Jr have delivered blistering attacks on Hillary. I love it! #RNCinCLE
Up Next

Christie, who has also been a fierce ally of Donald Trump's since dropping out of the primary race, made a point to contract Clinton's disingenuous nature against Trump's blunt and bold vision.

"Her focus group tested persona, with no genuineness to be found, is a sham meant to obscure all the facts and leave you able to vote for her," he said. "We cannot promote someone to Commander-in-Chief who has made the world a more violent and dangerous place with every bad judgment she has made."

Clinton responded to the speech with a tweet slamming Christie for his role in the Bridgegate scandal.

If you think Chris Christie can lecture anyone on ethics, we have a bridge to sell you. https://t.co/c1nkZojJFL#RNCinCLE