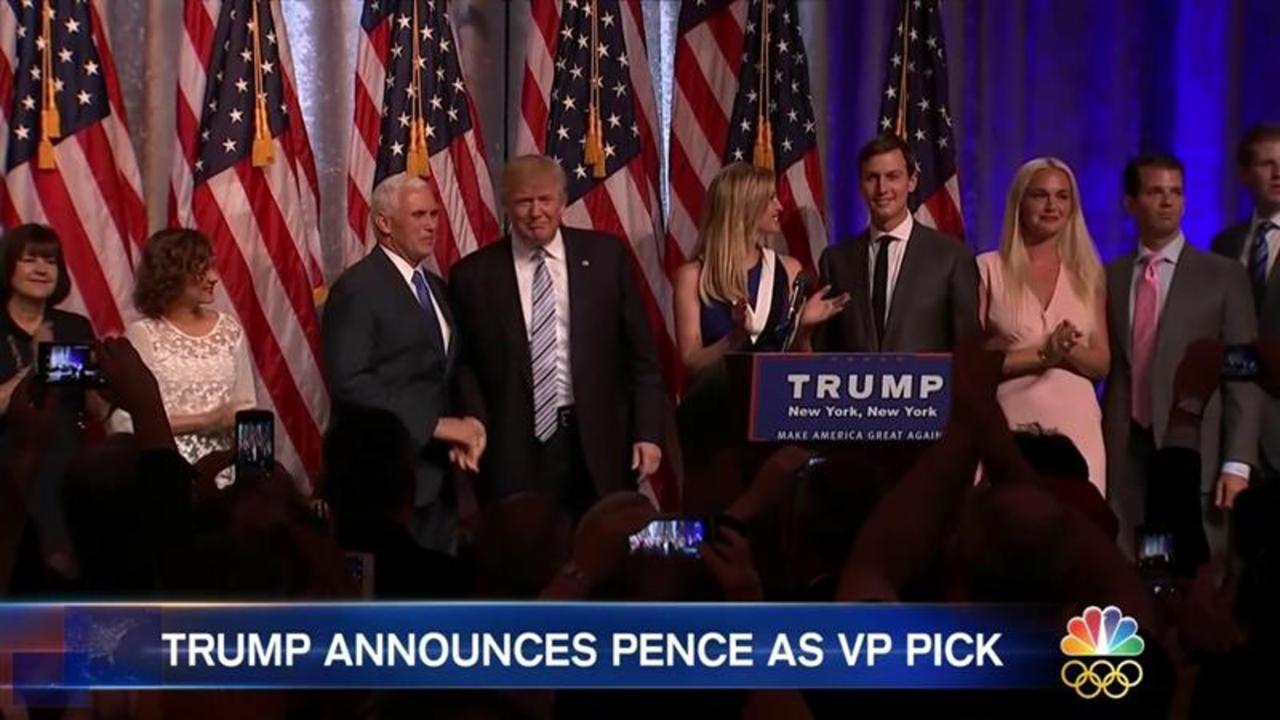 ZIONSVILLE, Ind. — Mike Pence returned home to Indiana on Saturday night to a "Welcome Home Rally" after a two-day trip to New York City in which Donald Trump announced him as his vice presidential running mate - and his quick dinner at Chili's turned into the most viral online meal in the country.

The Indiana governor flew in on a gray, private jet that rolled up to a modest hometown crowd of nearly 500 at an airport hanger in Zionsville, a town 35 minutes outside of downtown Indianapolis.

"You know, the last few days have been pretty overwhelming," Pence said from the stage, moments after waving to the crowd as he walked down the jet staircase with the Air Force One theme song blaring inside the hanger.

"My fellow Hoosiers, I'm here to announce that today in New York City, I accepted Donald Trump's invitation to run and serve as Vice President of the United States of America," Pence said during his brief, eight-minute address to the gathering.

Just hours after Trump introduced Pence as his VP pick in a scattered New York City speech, Pence looked to return home for the weekend before heading to Cleveland on Monday for the Republican National Convention.

More from NBC News: Trump Reminds Voters He's No. 1 When Introducing His No. 2

Yet his flight to the Hoosier state was delayed by an hour - and the governor, his wife and one of his daughters made a pre-flight stop at a Chili's near the Teterboro, New Jersey, airport. Within two hours of the tweet, "Chili's" was trending on Twitter across the United States.

The governor, relatively unknown nationally, told NBC News after his remarks in Indiana that he has "already started" on his speech to deliver to the country on Wednesday from the convention. And he told a woman standing among the adoring Hoosier crowd to "buckle up."

As for his immediate plans on Saturday night, Pence told NBC News: "We're going to go pick up a pizza, and go home, and watch a movie."

The Trump campaign hopes that Pence's conservative credentials used to win over his own Hoosier constituents could be a sample of what he could bring to the Trump ticket in red states.

Before the event, Bobbie and Larry Richardson - both passionate Ted Cruz advocates who attended the former candidate's rally on the night of the Indiana primary rally - drove to Zionsville to back Pence on Saturday.

"When Cruz pulled out and it looked like Trump was going to get it, I said at some point I wasn't going to vote at all," Bobbi Richardson said. But wanting to ensure, foremost, Hillary Clinton did not win in November, she said, with the addition of Pence, she intends to vote for the real estate mogul in November.

"I think [Pence] solidified the ticket," her husband, Larry, then added.

Terry Whitesell, who owned a manufacturing company out of Carmel, Indiana, also attend the rally and applauded the addition of Pence: "Trump needed someone to help pull the coalition together, and Pence has a strong record of pulling conservatives in and has knowledge of Washington. And he certainly helps in the Christian area."