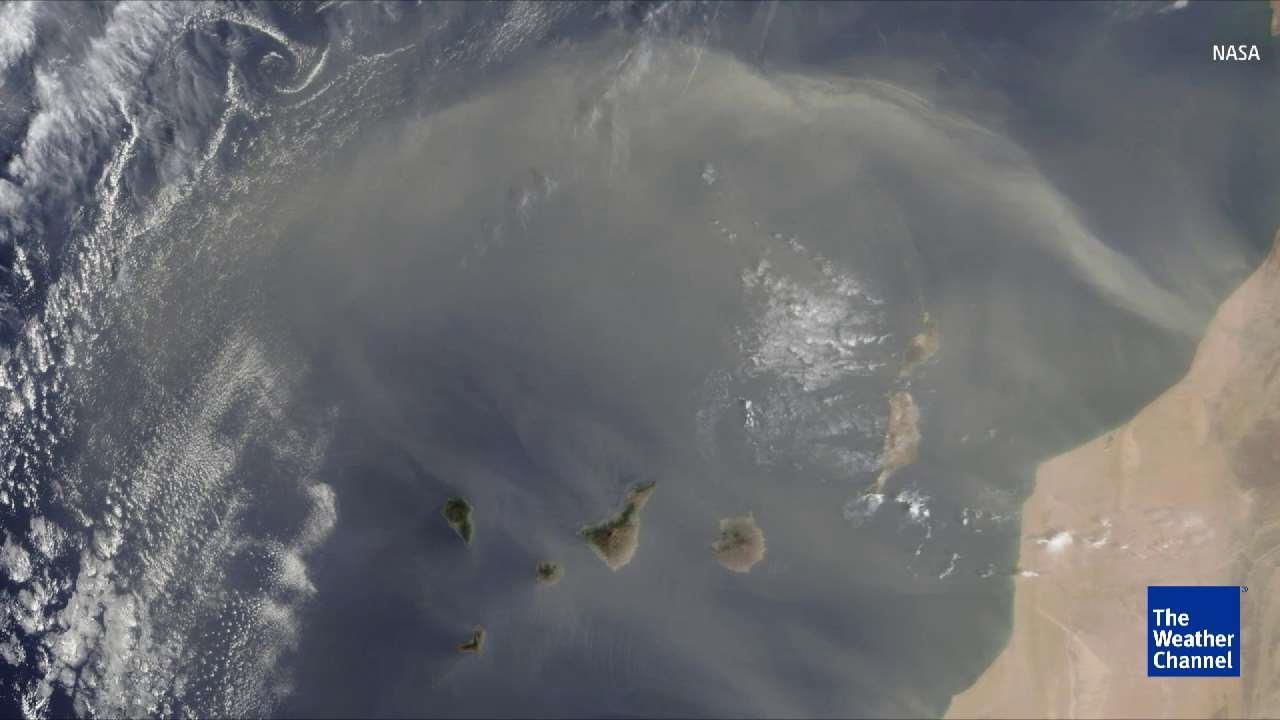 A plume of Saharan dust from Africa made it all the way to the Texas Gulf Coast early this week, making for hazy skies as well as vivid sunrises and sunsets.

Yet another plume of dust located over Mexico's Yucatan Peninsula on Wednesday morning was expected to spread towards the Texas Gulf Coast by Thursday. This may create more hazy conditions late this week, the National Weather Service in Houston said.

Plumes of dust from the Sahara Desert frequently make a 5,000-mile-long voyage to parts of the United States and the air that lofts these particles can have a big impact on the Atlantic hurricane season.

Known as the Saharan air layer (SAL), this dry, dusty air mass pushes westward off Africa into the tropical Atlantic Ocean about every three to five days from late spring through early fall.

"The air is extremely dry, with about one-half the moisture of the typical tropical atmosphere," said Jason Dunion, a tropical scientist with NOAA's Hurricane Research Division in an email.

The SAL is typically located between 5,000 and 20,000 feet above the earth's surface and is transported westward by bursts of strong winds that are located in the central and western Atlantic at altitudes between 6,500 and 14,500 feet.

It's easy to see on this NASA animation how the large dust plumes spread westward in early-mid July 2016 across the Atlantic, Caribbean and into the western Gulf of Mexico. Dust in the SAL is indicated by the orange and brown contours.

Animation of total aerosol optical thickness from July 4-11, 2016 highlighting the Saharan air layer (SAL) and embedded Saharan dust traversing the Atlantic Ocean basin, shown by the orange and brown contours in the middle of the image loop. (NASA/GSFC)

To give you a sense of how large these SALs are, Dunion says the outbreak pushing off the African coast on July 12, 2016, was roughly the size of the Lower 48 States.

Meteosat-9 split window Saharan air layer satellite product over the central and eastern Atlantic Ocean at 1715 UTC, July 12, 2016. At left, the SAL is shown by the yellow, orange and red shading off the African coast. At right, the contiguous United States overlays the SAL, for scale. (Jason Dunion and UW-CIMSS)

Saharan dust tracks as far west as the Caribbean Sea, Florida and the Gulf of Mexico multiple times each year.

The dust particles can contribute to hazy skies, and rather photogenic sunrises and sunsets in the Caribbean islands and near the Gulf Coast. NASA says the dust can also lead to the creation of toxic algal blooms in the Gulf of Mexico.

The dust also reaches South America at times. In fact, a recent study by NASA scientists has found that the dust acts as a fertilizer for the Amazon rainforest.

It's not yet well understood if and how the dust itself plays any significant, direct role on tropical cyclones, according to Dunion.

"Some studies have suggested that it (the dust) can affect how clouds and precipitation actually form."

An SAL can surround and engulf either an active tropical cyclone or a "wanna-be" tropical disturbance. When that happens, the system is suppressed, according to a 2004 study by Jason Dunion of NOAA-HRD and Christopher Velden of the Univerisity of Wisconsin's Space Science and Engineering Center.

One such recent example of this was Bertha in early August 2014. While west of the Windward Islands, Bertha was completely surrounded on all sides by an SAL. 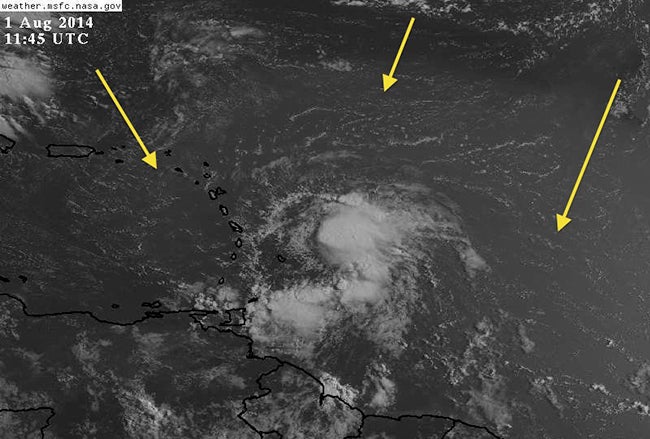 Visible satellite image of Tropical Storm Bertha on August 1, 2014, east of the Windward Islands. Yellow arrows and milky texture denote the dust embedded in the Saharan air layer surrounding the tropical storm at that time. (NASA/MSFC)

"Any convection that kicks off quickly reaches the bottom of the SAL and then entrains this dry air," says Dunion.

Dunion said a 30-50 mph jet hiding up in the SAL is almost always embedded along the southern edge of the SAL.

3) Its sinking air can intensify the so-called trade-wind inversion, essentially, a cap on the development of showers and thundershowers sometimes in play in the tropics.

While perhaps not playing a direct role in weakening tropical cyclones, a 1980 study by Toby Carlson and Stanley Benjamin found the dust in the SAL absorbs sunlight, helping to keep the layer warm and maintain its squelching inversion for thousands of miles across the Atlantic basin.

Dunion and Velden also found if a cyclone emerges from the SAL, it can undergo intensification, citing Hurricane Erin in 2001as an example.

Furthermore, they submitted the SAL may be one factor that limits the number of tropical cyclones in the Atlantic basin each year (12) compared to the more active northeastern (16) and northwestern Pacific (26) basins.

There's also been decadal variability in SALs that may have impacted tropical activity.

"Records collected by satellites and island stations going back to the 1960s and 1970s show that SAL activity (using dust as a tracer) have ebbed and flowed over the years," said Dunion.

The Fall 2016 launch of the next-generation GOES-R satellite will allow better tracking of these SALs in the western Atlantic Ocean, Gulf of Mexico and Caribbean Sea.

"We'll have the capability to monitor SAL outbreaks approaching the U.S. with higher resolution and frequency than we've ever had before," Dunion says.

More from Weather.com
The Best Reasons to Visit Denali National Park and Preserve
Can You Guess These National Parks From Space?
50 Incredible American National Monuments (PHOTOS)