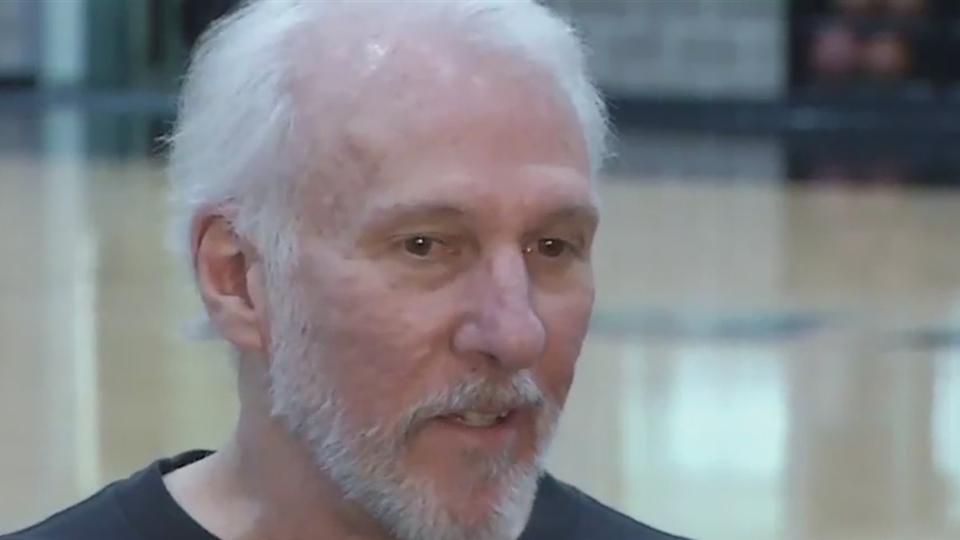 Gregg Popovich and Tim Duncan have been the anchors of the San Antonio Spurs since 1997.

Popovich took over as head coach during the 1996-97 NBA season, and the next year, the Spurs drafted Duncan with the No. 1 pick. One year later, they won their first championship together.

Following Duncan's decision to retire, Popovich gave a press conference on Tuesday to try and say goodbye to a player he's spent the last 19 years with.

What resulted was an emotional, heartfelt dialogue from Popovich, who has often said (perhaps hyperbolically) that he wouldn't continue to coach without Duncan.

Dressed in a black t-shirt with a picture of Duncan and the words "Impossible is potential," Popovich told reporters, "We've been saying it for 19 years, and he really only cared about doing the best job he could basketball-wise and being who he was for his teammates and being somebody who loved his family. That's really who he is."

Popovich then gave a hypothetical to describe what it's like to be around Duncan.

"You know everybody talks about who they would like to eat dinner with. You know, if you had one night to go to dinner, go to lunch with so and so, and people say, you know, Mother Teresa and Jesus and the Dalai Lama and, OK, I get it. But if you think about it a little bit more earthly, worldly type people, you know, people who are interesting, I think of people like William F. Buckley on the right and Gore Vidal on the left, when they had their debates — some of you are old enough to remember that stuff — really clever, insightful people, ideas that blow your mind and that kind of stuff. And I can honestly tell you [chokes up], my dinner would be with Tim Duncan, because he is the most real, consistent, true person I have ever met in my life. He was so genuine, it blows your mind, like Buckley or Vidal would in an avant-garde sort of way.

"To spend time with Timmy is really sublime in many ways."

It was just a small moment in Popovich's praise of Duncan. He continued, paying tribute to Duncan's subtly sarcastic sense of humor, then said he owes his career to Duncan.

"I would not be standing here if it wasn't for Tim Duncan. I'd be in the Budweiser League someplace in America, fat and still trying to play basketball or coach basketball. But he's why I'm standing. He's made livings for hundreds of us, staff and coaches, over the years, and never said a word. Just came to work every day. Came early. Stayed late. Was there for every single person, from the top of the roster to the bottom of the roster because that's who he was, in all those respects."

He also called Duncan "irreplaceable" and appeared to get choked up when imagining life next season, walking into an arena, the locker room, or the team bus, and not having Duncan there.

Still, Popovich retained his wit, even when getting emotional about the subject. When asked if he tried convincing Duncan not to retire, Pop said, "No. I'm so tired of coaching him, he's so stubborn. I would never try to talk him out of anything."

And when asked if there's a specific game of Duncan's that sticks out, Popovich recalled a Summer League game when Duncan got blocked by Greg Ostertag.

The NBA will be a different place without one of the best players to ever play the game, but at least we still have Popovich.

More from Business Insider:
Tim Duncan is retiring from the NBA after 19 years
WHERE ARE THEY NOW? The players from Tim Duncan's 1997 NBA draft class
The biggest winners and losers of the NBA's wild offseason