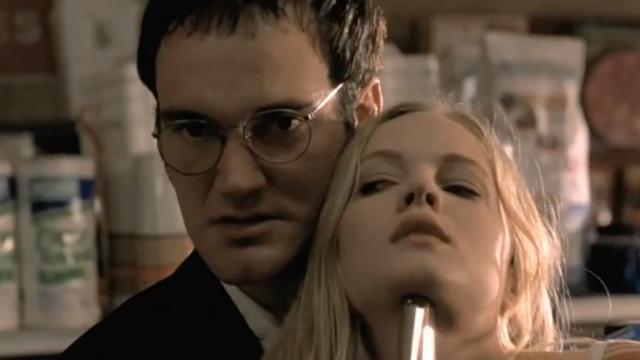 JERUSALEM, Israel — "Shabbat Shalom," shouted Quentin Tarantino as he burst into the stage of the jam-packed Jerusalem Cinematheque to present "Pulp Fiction" and chat about his career, his relationship with actors and what keeps him going. The director, who was the subject of an homage during the festival's opening ceremony on July 7, delivered a humor-filled talk that underscored his passion and toughness. Here's what he said about critics, dialogue and casting, among other topics.

About his claim that he only wants to make 10 movies.

"I'm planning on stopping at 10. So it'll be two more. Even if at 75, if I have this other story to tell, it would still kind of work because that would make those ten. They would be there and that would be that. But the one he did when he was an old fucking man, that geriatric one exists completely on its own in the old folks home and is never put in the same shelf next to the other 10. So it doesn't contaminate the other 10."

On the theory that he makes movies in threes:

"I was listening to a podcast and there was a British critic pontificating about my work. And he said something to the degree of 'Well, Tarantino makes movies in threes. 'Reservoir Dogs,"Pulp Fiction,' 'Jackie Brown.' Then 'Kill Bill 1' – I consider 'Kill Bill' as one movie but for the sake of his hypothesis — so 'Kill Bill 1,"Kill Bill 2,"Death Proof' and then 'Inglorious Basterds,"Django' and 'The Hateful Eight.' (The critic) goes 'He makes movies in threes. The first two movies are very symbiotically connected; almost complement each other in a different way. The third movie usually is linked by genre to some degree to another to the first two but it almost exists as a rebuke to the first two. It almost exists as a bastard child of the first two and is usually never as popular as the first two.' He's onto something — even the idea that the third one is almost, in its own way, a critique of the first two. And I thought that was really interesting and it held more water the more I thought about it."

About his films being packed with references to other movies:

"Not as many as critics think there are. It's one of those things where it becomes quite annoying. There are definitely things that I've taken from the history of cinema. Rarely as a shot. I rarely take shots from other movies. In 'Pulp Fiction,' when Marsellus walks in front of the car which is similar to the one in 'Psycho.' I think that might be the only 'shot for shot' I've ever taken from another movie exactly.

But I get accused of that all the time. It's one of those things where it becomes annoying because anything in my movie – critics are trying to write a laundry list. 'That's from this and that's from that' and it's like 1) movies I haven't even seen and didn't take it from that and came up with it myself or 2) well yes, in the history of cinema, some other people have maybe done this but that's not where I'm coming from. But that's very much the mind of critics who are trying to beat the mastermind. And throw how smart they are with all their film references."

About how he gives direction:

I am the captain of the ship and they have to follow my orders as far as that's concerned. But when it comes to getting the best out of them in any given scene or performance, then I'm at their disposal. Because it's not about getting my way, it's about making them comfortable and getting the best out of them. I'm just very sensitive to them, we have a lot of private talks and I when I have to direct, I'm not just sitting in video village which is usually in another room watching a fucking television. As they're acting, I'm sitting right next to the camera. There's no monitors on my set, I'm sitting right by the camera. And I'm looking right at them. And when it's done, they look at me... 'what do I think?' When I have direction, I walk over to them and I talk about it. I don't scream at them from across the set. Or scream from another room 'do this... do that!' I'm talking directly to them and BOOM we go in and do it. It's very intimate."

About his obsession with dialogue:

"The one rule that I have is 'you have to know my dialogue backwards and forwards.' When you show up on the set, you need to know my dialogue as if it was your fourth week of a Broadway run after a six week tryout. Anything else, you are ripping me off. I could fire you and start all over again. Because you're just disrespecting me. You can't just do the kind of work that I need you to do if you don't know the lines beyond and beyond. Because I'm looking for that take when an actor just happens to kick in to something. And actors describe that moment where all of a sudden, they just kick into the character and at that moment, they can't do it wrong, because they are the person. If they say a joke, it's a little bit funnier because they are really saying the joke and get the humor. Actors describe it, they say it's like 'flying' because they're literally, that's why they become actors. You can't deal with flying when you don't know the dialogue that much. That will bring you back down to earth. I am paying them to say my dialogue. That is their job. I like my actors but I love my characters and it's the actors' job to say my lines."

About shooting "The Hateful Eight" in 70mm:

"For a whole lot of people on the internet and on podcasts who say 'Why do you shoot it in 70mm, it takes place indoors most of the time,' I say that it's a very shallow view of what you can do with 70mm. It's not just about shooting the Arabian desert. It's not about just shooting ten thousand steers in a Western or shooting mountain tops, although I did do my fair share of shooting mountain mops. But 70mm is maybe the best format for shooting close-ups and the close-ups for that movie were very important and the way it shows actors' faces is amazing. Sam Jackson never looked as evocative as he did in those close-ups, Sergio-Leone style. But then also, I thought it was important because I think it put you in the place. You are in it with them."

The other reason I did it is that I'm a very big proponent of film projection. In my mind, digital projection is just TV in public. And I don't need TV in public. My TV set-up at home is pretty awesome, I don't need to watch it with strangers. And to me, film is why you leave the house. By giving up film projection, we've already ceded too much ground to the barbarians as far as I'm concerned. And so, if I shoot in 70mm, there will be a very concentrated effort to show it on film. That was one of the main reasons."

About the casting challenge of "Inglorious Basterds":

About his personal favorite of all the characters he's written:

"I didn't know yet that Colonel Landa (Christopher Waltz) was a linguistic genius, but during the course of writing the script, he became a linguistic genius. No matter what character came in the room, he could kick it to them in their language and speak it really well. He's not shown doing it, but he's probably one of the only Nazis in cinema history who could speak Yiddish, perfectly. If Filipinos walked in the room, he'd be kicking it in Tagalog with them and not missing a click."

About how Waltz made "Inglorious Basterds" happen a week before the shoot, when Tarantino and his producer Lawrence Bender were about to give up.

"I was getting to be kinda worried and unless I found the perfect Landa, I didn't want to make the movie. I was literally emotionally preparing myself to pull the plug. Then Christoph Waltz walked in. (...) And it was just obvious he was the guy. He could do everything we wanted. He was just amazing.... We were ecstatic when he finished. We were just vomiting all over him: 'Oh my god, you were amazing, you were fantastic. Oh my god. Thank you, thank you, thank you.' I've never given a man a blow job, but at that moment, at that time, if anyone deserved it, it was him."