7 easy ways to save money at the farmers market 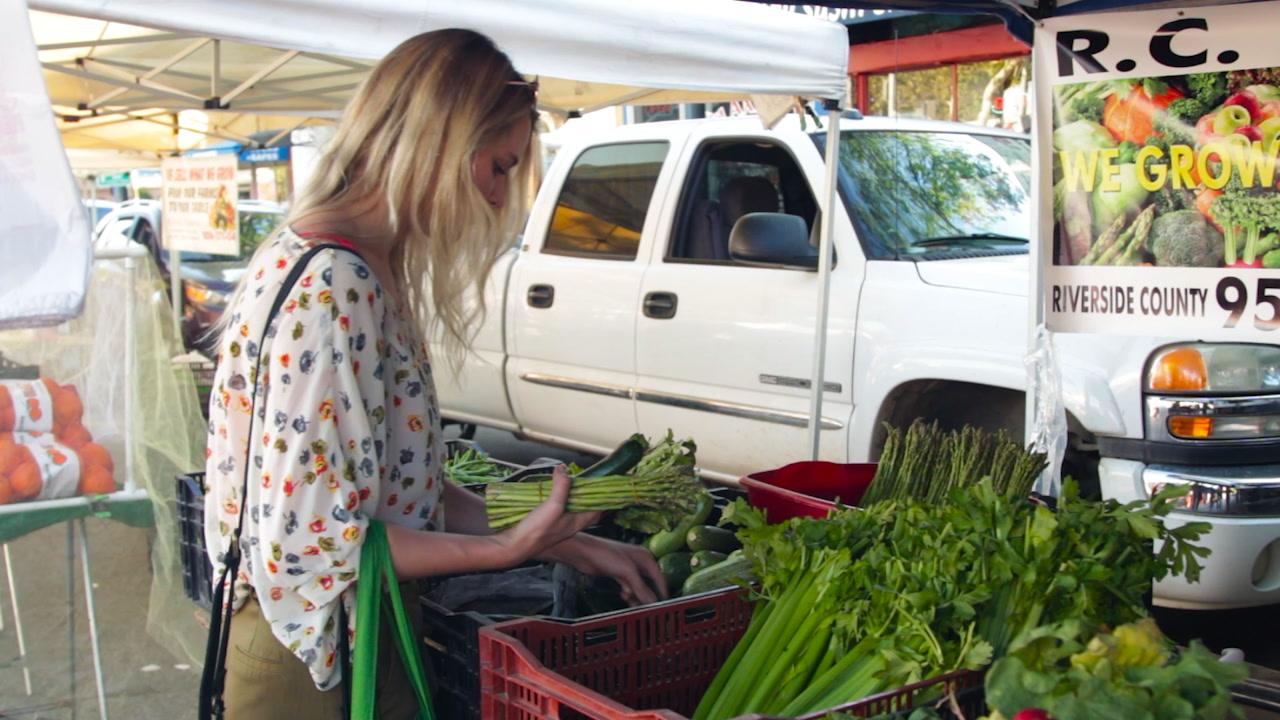 Hitting up the local farmers market is one of summer's little pleasures—a place to pick up fresh fruits and veggies as well as eggs, cheese, baked goods and, depending on where you live, more exotic items like wine, honey, jerky, pickles and ice cream.

But as much fun as it can be poking around all the different tables and doing your part to support local organic producers, farmers markets have a rep as expensive alternatives to regular supermarkets. And while the fare can be pricey (at most markets, individual vendors set their price points), farmers market managers say it's definitely possible to score bargains and even lower your usual food bills.

"You should be able to find at least grocery store prices at most markets," says Barb Ristau, market manager for the Franklin County Farmers Market in Iowa. "Sometimes I have to tell my vendors to charge a little more for certain things because they often don't charge enough." Research also backs up the idea that your tab at the farmers market will be equal to or less than the bill for similar items at a regular food store.

Even when farmers market prices are on the high side, there are ways to score bargains—if you know a few insider secrets. Grab your reusable shopping bag: Here's what greenmarket pros recommend doing to get the most bang for your buck.

Make a Shopping List and Budget Before You Go

True, part of the fun of shopping the farmers market is discovering new and unusual goodies. But because vendors will be actively trying to sell to you, you may be particularly susceptible to making impulse purchases. (Hmm, no wonder the fresh blueberry pie is always strategically placed right in front of your nose.)

Putting together a list of exactly what you want to buy and keeping in mind a dollar amount that you can't surpass will keep you from blowing your budget. Just like you go to the grocery store with a list, make one before you head out to the greenmarket and vow to stick to it, says Beverly Dunaway, director of the Arkansas Farmers' Market Association.

11 PHOTOS
11 ways to save at whole foods
See Gallery

11 ways to save at whole foods

Be wary of dairy in glass containers

If you grab milk or cream from a glass bottle, you'll be charged for the price of the bottle in addition to its contents. If you must purchase the glass bottle version of the product, be sure to bring it back to Whole Foods next time you're shopping and customer service will give you a voucher.

Bring your own bags

Whole Foods will offer you a five to 10 cent discount from your total for bringing your own bag.

You'll end up paying way more and receiving way less. Always opt for the full version of the fruit or vegetable and prepare it yourself.

Deals on bulk amounts of certain meats vary from location to location. Ask the butcher about what bulk meat deals your local Whole Foods is offering.

Special deals (that only last for a few days or a week) are unadvertised outside of the store but can be found while shopping by their bright yellow tags.

Buy cases of products you like and save 10 percent

Whether it's protein bars or wine, Whole Foods will discount a case-sized version of your product for 10 percent, a well worth it investment if it's a product your consuming often.

Stores will offer specialty Friday-only sales that can offer you major one-day savings.

The store's value brand is extremely well-priced and will offer you the healthiest version of discounted products, as there will be a significantly lower amount of preservatives than other discount brands, according to Whole Foods.

Deals will vary from store to store and are always advertised through social media.

Bring your own containers when shopping the bulk section

When weighing your bulk purchase at checkout, Whole Foods will subtract the price of the weight of your container if you bring your own from home instead of using the ones provided in the store.

Do a Lap or Two First

Many farmers markets host several producers selling the same fruits, veggies and other goods with different price tags. So it pays to walk through the entire market a few times before you plunk down your cash, says Dunaway. Once you've scoped out who is selling what and for how much, then you can go back and start filling your shopping bag.

With advances in agricultural technology, farmers can extend the growing season of various types of produce—but you'll often pay a premium for buying something when it's not in season, says Dunaway. "You're going to be able to buy things much cheaper when there's a glut of them in the market," she says. So, for example, if you're waiting to buy Brussels sprouts in July when they're not in season in many parts of the country, it's going to cost you more.

Ask for a Deal When You're Buying in Bulk

If you know you're going to fill your freezer with sweet corn this weekend for a family barbecue or make several mason jars' worth of tomato sauce to store for the winter, ask growers if they offer a bulk discount. "Very likely they will do something like that if they know they're going to make a pretty good-sized sale," says Ristau. She says she once bought a bushel of tomatoes for just $30 after she asked for a bulk discount. "They were cheaper than I would have paid in the grocery store."

Get to Know the Farmers

Make it a habit to chat up vendors and become a familiar face, and they're more likely to see you as a regular customer and let you in on any deals. "If they have extra of something and they know you might be interested, they might let you in on a deal first by saying, 'I have X number of pounds of asparagus left—would you give me this price for it?' " says Ristau.

According to Martin Lindstrom, the larger the shopping cart, the more likely you are to spend. The marketing consultant told The Consumerist, "We doubled their size as a test, and customers bought 19% more."

Walking into a grocery store and smelling freshly baked goods and flowers, especially if you're in a good mood, is a surefire way to get you to throw a few unnecessary items into your cart as your begin shopping experience.

After you've already been tricked into picking up a loaf of bread or some flowers, supermarkets also get you by placing the produce in the front of the store. By doing this, they fool you into believing you're being healthier by shopping for fruits and veggies first so you won't feel bad if you decide to stock up on a few unhealthier snacks along the way to checkout, too.

You may think the mist on fresh fruits and veggies is helping the produce, but in all actuality, it makes them rot faster. Also, be sure to shake off the access water before purchasing your produce -- the mist tends to add additional weight, making the price go up.

Have you ever wondered why most grocery stores play some sort of elevator music? It's because they want you to take your time while shopping. Many stores play music slower than the average heartbeat, so pop your headphones in and play upbeat music to combat this trick.

It's common to believe you're getting a great deal during a 10-for-$10 promotion, but say, if a can of beans was originally 87 cents, you're actually paying more versus buying 10 of the same cans when they aren't on "sale."

Dairy being in the back of the store

The reasoning behind the age-old trick of placing milk and other dairy products in the back of the store may surprise you. Although it forces you to walk through various aisles, the true reason is because trucks unload their shipments in the back of store, and since milk needs to be refrigerated immediately, the easiest place to keep it is in the back.

If you've ever wondered why all of the expensive items seem to be the most accessible, there's a reason behind that, too. Supermarkets place cheaper items on the lower and higher shelves and reserve the middle, or eyesight level, shelves for their most expensive products.

Just because you are buying a seemingly fresh cut of meat or fish from the deli and paying a higher price, doesn't necessarily mean the product is of better quality. Often times, the meat was previously frozen meaning you may have to use it sooner than meat you would buy from the frozen section.

Changing the layout of the store... often

Don't get too comfortable with your local supermarket's layout. Markets believe that when a person remembers where there items they plan on buying are, they'll spend less time in the store and will ultimately spend less money.

When markets are hosting special events or festivals, they may offer some goods at discounted prices, says Dunaway. To stay in the loop, you'll want to make sure you're following your local markets on Facebook, Twitter or other social media sites—and that you subscribe to their newsletters via email if they have them.

Your local newspaper is also a good place to check for promotions, particularly if your nearby market isn't so technologically savvy. "We've done promotions through newspapers where we give away free coupons for people to spend at farmers markets," says Ristau.

Consider Going Later in the Day

The idea here is well into the afternoon, some growers might be looking to unload any goods they still have left, so they don't have to lug it back to the farm at closing time. Since different markets have varying rules, "I think folks should feel free to discuss [reduced pricing] with vendors while at market," says Dunaway. "A vendor might very well tell someone how they might be able to give them produce at a reduced price."

While the farmers market isn't like a bazaar where haggling is the norm, it can't hurt to politely ask if you can work out a deal, or if they have any "seconds," Dunaway says, that are a little bruised or otherwise didn't look perfect. Of course, the offerings will be more picked over the later in the day you go so remember that you'll be trading selection for potential savings.

The post 7 Easy Ways to Save Money at the Farmers Market appeared first on LearnVest.