The internet won after a moth landed on Cristiano Ronaldo's tears

Cristiano Ronaldo went down with a knee injury early in the game, struggling to stay on the field for the remainder of Portugal's victory over France. As he fell to the ground after one of the few times he tried to play through the pain, a moth landed on his face and the internet went nuts over it.

READ MORE: What if LeBron never took his talents to South Beach? 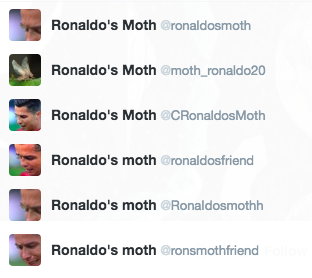 And even when Portugal won, the moth was still the main topic of discussion:

A tiny scarf and medal for Ronaldo's moth.

RIP Ronaldo's Moth. The world's most famous footballing insect has died after a long and illustrious career. He was 6 weeks old.

Thank you, internet. You win again.

More from AOL.com:
Portugal suffers huge blow in Euro 2016 final as Cristiano Ronaldo injures his knee and had to be replaced
Portugal breaks into jubilation after Euro soccer win
Portugal stuns France with late Eder strike in Euro final