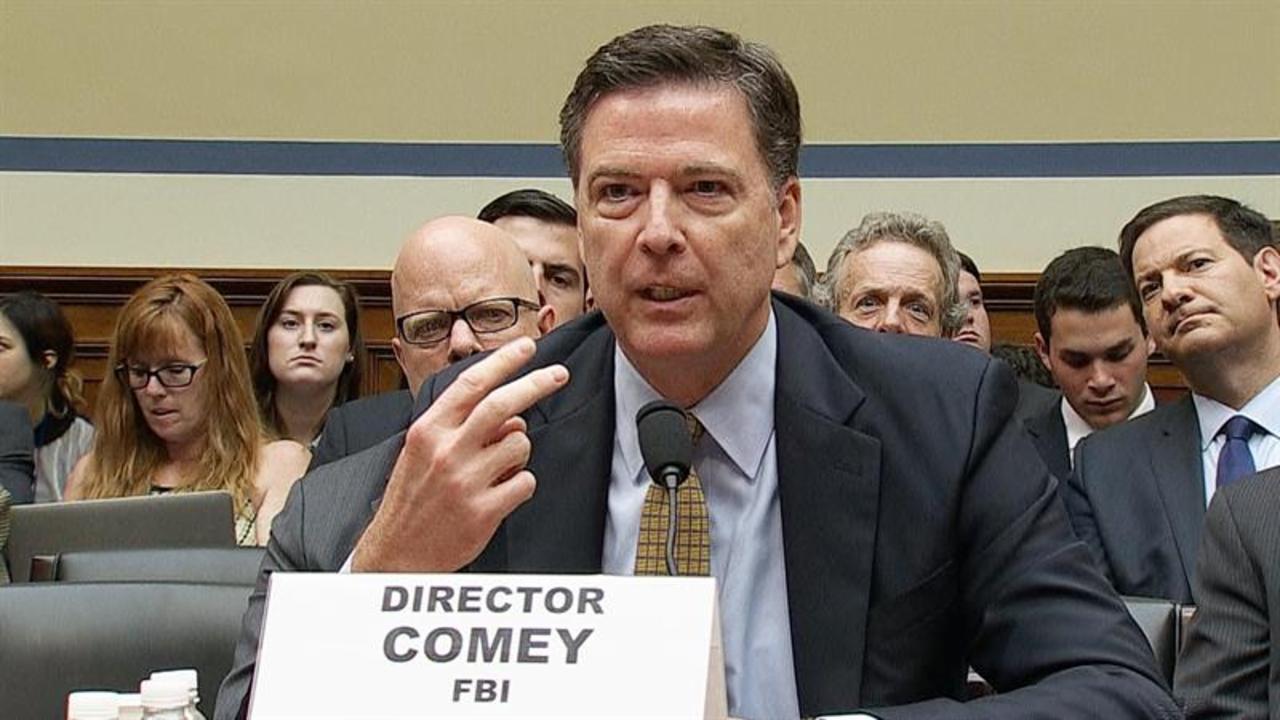 FBI Director James Comey told U.S. lawmakers on Thursday that FBI employees who mishandled classified material in the way Hillary Clinton did as secretary of state could be subject to dismissal or loss of security clearance.

Comey addressed the issue at a House of Representatives committee hearing that lasted nearly five hours after House Speaker Paul Ryan said in a letter to Director of National Intelligence James Clapper that Clinton should be denied classified briefings during her campaign for the presidency.

Comey, who on Tuesday said he would not recommend that Clinton face criminal charges, was asked at the hearing if Clinton should face administrative punishment for the way she handled her email. "I don't think that's for me to recommend," he said.

Reaction to FBI director's statement on Hillary Clinton's emails
The system is rigged. General Petraeus got in trouble for far less. Very very unfair! As usual, bad judgment.
FBI director said Crooked Hillary compromised our national security. No charges. Wow! #RiggedSystem
Statement of @FBI 's Comey, recommending no charges but rebuking @HillaryClinton for carelessness, is about best result she could get.
The fix is in. No accountability. Pathetic.
Absolutely outrageous presser by Comey. DOJ/FBI is supposed to speak in court. If it won't make statements in court, it shouldn't make them.
No recommendation of criminal charges! It is over! Let Hillary and the country move on! Repeat: it is over. No criminal charges.
Now we ponder which is more irresponsible: @HillaryClinton 's identifying classified emails or @realDonaldTrump identifying racist retweets
She mishandled top secret classified material in an "extremely careless" manner...which is not "grossly negligent," apparently?
The FBI decision shows once again how the Clintons and others at the top get to live by a different set of rules from everyone else.
110 emails contained classified information & email account was possibly hacked. “Convenience” should never be put before national security.
The findings of the @FBI are a clear indictment of @HillaryClinton's judgement and fitness to be President
The blindfold had clearly been removed from the scales of justice.
@realDonaldTrump - What I got from @FBI Director Comey remarks: @HillaryClinton's recklessness makes her unfit to President! #CrookedHillary
Hillary may not be POTUS, but she'll be on the Winter Olympic team for ice skating, no one has successfully skated on more thin ice than her
Disappointed in FBI's decision to not recommend charges against Clinton. She broke the law.
Section 793 of Espionage act uses "gross negligence" vs "extremely careless" standard in treatment of classified information as found by FBI
Up Next

Comey did say that his employees in the Federal Bureau of Investigation would face discipline for the same behavior.

Presidential candidates normally get access to classified information once they are formally nominated and as director of the FBI, Comey does not have the authority to revoke Clinton's security privileges.

A Clinton spokesman said Republicans' efforts to deny her the briefings was "another blatantly political stunt."

Comey, under persistent questioning at the hearing of the House Oversight Committee, said Clinton did not break the law.

"The question I always look at is, is there evidence that would establish beyond a reasonable doubt that somebody engaged in conducted that violated a criminal statute. And my judgment here is there is not," Comey said.

The issue of Clinton's use of private email servers has cast a cloud over her campaign leading up to the Nov. 8 presidential election, raising questions among voters about her trustworthiness and judgment and giving her Republican presidential rival, Donald Trump, an avenue of attack.

Comey also said Clinton knew that her email server at her home in Chappaqua, New York, was not authorized to receive classified information.

But Clinton may not have had sufficiently sophisticated understanding to know the emails that passed through her personal server were classified, Comey said. Only three of the 30,000 FBI-reviewed emails were explicitly marked as classified and those were marked with a "C" in the body of the email, not in the header, he said.

Comey said his FBI team had conducted its investigation of Clinton "in an apolitical and professional way" and he had no reason to believe she had lied to the FBI. Clinton had said publicly she never sent or received any classified information.

Comey had disappointed some Republicans by only rebuking Clinton, not recommending charges against her, in a Tuesday announcement for what he called "extremely careless" handling of classified information while using private email servers.

"IF YOUR NAME ISN'T CLINTON"

"I think there is a legitimate concern that there is a double standard, if your name isn't Clinton or you are not part of the powerful elite that Lady Justice will act differently," Representative Jason Chaffetz, chairman of the House Oversight Committee, said to Comey at the beginning of the hearing.

A Democratic member of the committee, Representative Elijah Cummings of Maryland, defended Comey's actions by saying, "I firmly believe your decision was based on conviction, not convenience."

The hearing took place as Trump met with Republican lawmakers on Capitol Hill to get them behind his candidacy, discussing a variety of issues, including his campaign style.

Ryan, who has been critical of Trump at times, said Trump and Republican House members had "a great meeting."

Comey's testimony marked the first time he has taken questions publicly since his announcement this week that the FBI was not recommending charges against Clinton. U.S. Attorney General Loretta Lynch accepted the FBI recommendation and was to appear at another hearing next Tuesday.

Comey said on Tuesday that 110 classified emails passed through Clinton's servers, which were not kept on a secure government server. He rebuked her for "extremely careless" handling of classified information but said no reasonable prosecutor would charge her or her staff criminally.

Comey, a Republican who was appointed by Democratic President Barack Obama and also served in the administration of former Republican President George W. Bush, has built a reputation as a straight shooter who does not bend to pressure from either party.

He has differed sharply with the Obama administration, including over the case of General David Petraeus, who pleaded guilty after he knowingly shared classified information with his biographer and lover. Comey recommended Petraeus be charged with a felony but then-Attorney General Eric Holder downgraded the charge to a misdemeanor.