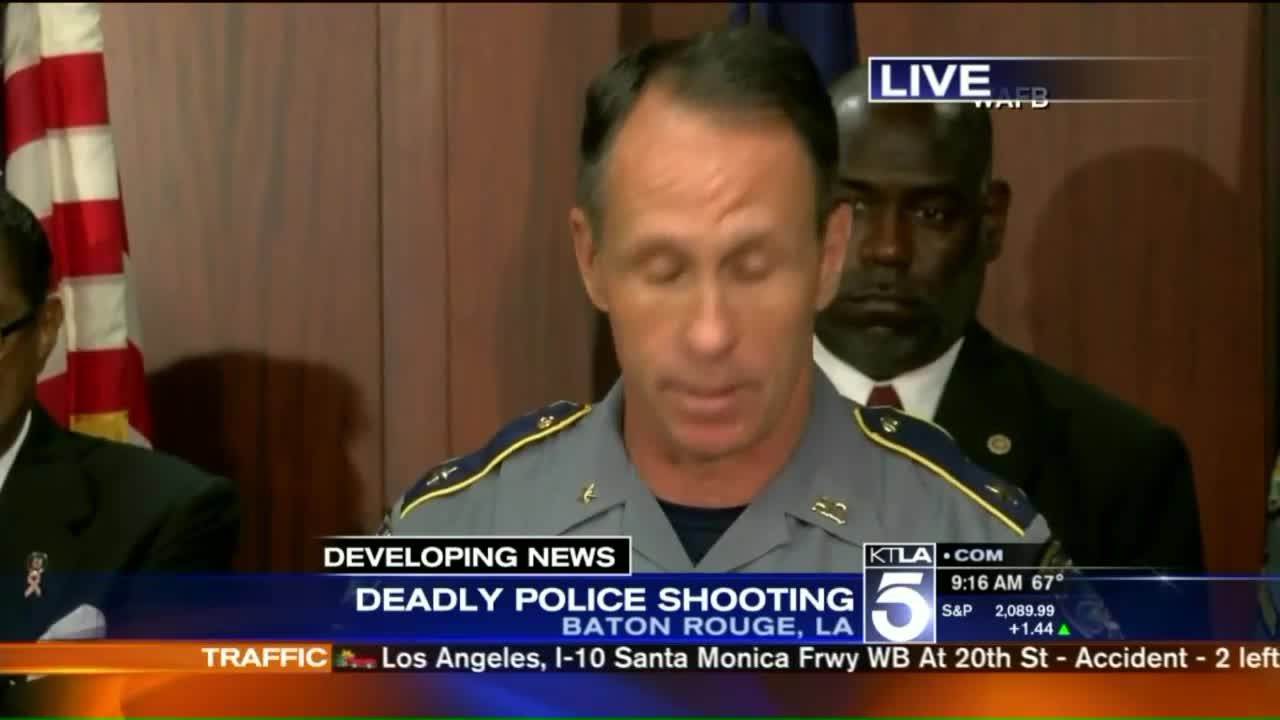 BATON ROUGE, La., July 6 (Reuters) - The U.S. Justice Department said on Wednesday it will investigate the killing of a black man pinned to the ground and shot in the chest by white police officers outside a convenience store in Baton Rouge, Louisiana.

Captured on a bystander's video, the graphic images of the shooting of Alton Sterling, 37, early Tuesday stirred a social media outcry over the latest case of alleged police brutality against African-Americans in cities from Ferguson, Missouri, to Baltimore and New York.

Overnight, about 200 protesters in Baton Rouge chanted "Hands up, don't shoot" and "Black lives matter" and more protests were planned for Wednesday evening.

Local officials rushed to defuse tensions on Wednesday, saying they were concerned about the incident and that the U.S. Justice Department will lead the investigation.

"I have very serious concerns. The video is disturbing, to say the least," Governor John Bel Edwards told reporters. He said he had spoken with the victim's family and that they joined him in calling on protesters to be peaceful.

See images of the protests:

Alton Sterling protests
People protest after Alton Sterling, 37, was shot and killed during an altercation with two Baton Rouge police officers in Baton Rouge, Louisiana, U.S. on July 5, 2016. REUTERS/Bryn Stole
Up Next

Baton Rouge Mayor-President Kip Holden and local police said they wanted answers about the shooting of Sterling, and welcomed the outside investigation.

Parts of the incident caught on a bystander's cell phone show an officer confronting Sterling in the parking lot of the Triple S Food Mart, and ordering him to get on the ground.

The brief video then shows two officers tackling Sterling to the pavement, with one pulling a gun from his holster and pointing it at his chest, then firing a shot.

Although the camera jerks away from the scene, at least three gunshots were heard. Police did not say how many shots were fired and declined to say whether a stun gun was used on Sterling before he was tackled.

The two police officers involved in the shooting, Blane Salamoni, a 4-year veteran, and Howie Lake, a 3-year veteran, were both put on administrative leave, Baton Rouge Police Chief Carl Dabadie said at a news conference.

Early Tuesday morning, the officers responded to a call regarding a black man wearing a red shirt and selling CDs outside the convenience store, who reportedly made threats with a gun, Dabadie said.

"When officers arrived Sterling was armed and the altercation ensued that resulted in the loss of his life," Dabadie said.

The body cameras of both officers became dislodged during the altercation, but continued recording audio and video, police said at the news conference. The recordings and video from the store and from a vehicle will be turned over to federal investigators, police spokesman Lieutenant Johnny Dunham told reporters.

RELATED: Number of people killed by police by state

Number of People Killed by Police by State | Graphiq

The owner of the Triple S store, Abdullah Muflahi, who said he witnessed the shooting, told The Advocate newspaper that Sterling was armed but was not holding his gun or touching his pockets during the encounter. He said police retrieved a gun from Sterling's pocket after the shooting.

Relatives of Sterling and acquaintances from the neighborhood described him as a local fixture who had been peddling copied CDs, DVDs and games in front of the Triple S Food Mart for years.

According to the Louisiana Department of Corrections, Sterling was convicted in 2000 for carnal knowledge of a juvenile, a felony, and spent about four years in prison. He was to be registered as a sex offender upon his release.

He was arrested about five times after his release. He was convicted in 2011 for illegally carrying a weapon.

Those who knew him described a funny, jovial and friendly person who worked hard, sometimes selling CDs well into the night to eke out a living.

"I'd never seen him get out of hand with anyone," said Elvina Scott, who lives nearby and said she had purchased a CD from Sterling a few minutes before the shooting.

"He could always make you laugh," said Sharida Sterling, a cousin who grew up with him and described prank calls and other jokes. She said he had a "rough childhood."

"Big Alton," read notes on a memorial that friends and family put together outside the store.

Cameron Sterling, Alton's 15-year-old son, broke down crying at a news conference on Wednesday morning as his mother spoke. "He was killed unjustly and without regard for the lives he helped raise," said the mother, who did not give her name. (Additional reporting by Letitia Stein in Tampa, Fla., Laila Kearney in New York City and Brendan O'Brien in Milwaukee, Wis.; Writing by Fiona Ortiz and Colleen Jenkins; Editing by Jeffrey Benkoe)

More from AOL.com:
Apple's new patent allows them to disable your iPhone camera at will
These two men skipped work for 15 years straight ... and were still paid for every day
New rules give protesters more leeway at Republican convention