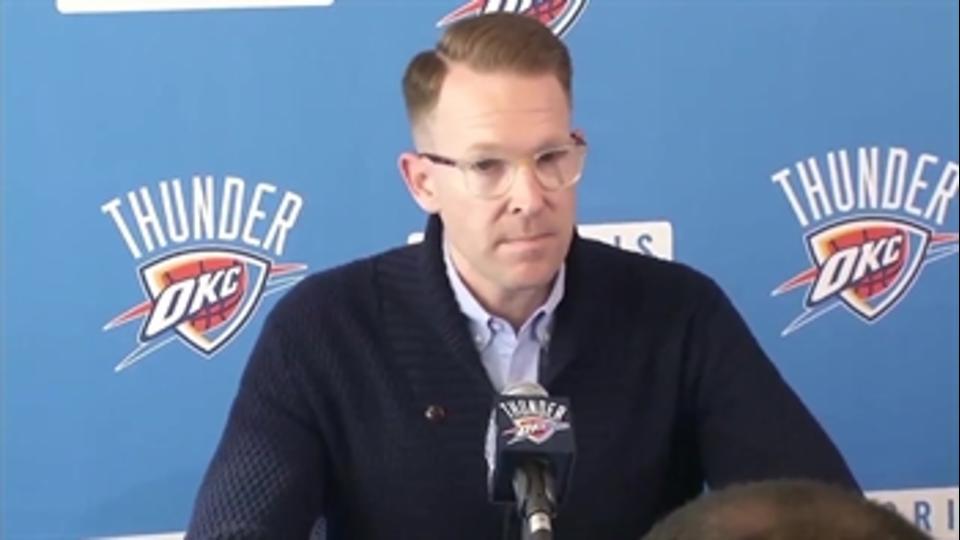 Kevin Durant made the shocking move on Monday to leave the Oklahoma City Thunder and sign with the Golden State Warriors.

For as thrilling of a gain as it is for the Warriors, it's an equally devastating loss for the Thunder.

The Thunder were 48 minutes from beating the Warriors in the playoffs to advance to the Finals and couldn't get it done. In turn, the Thunder lost one of the league's best players to the one team they just couldn't put away.

However, when discussing the fallout on Monday night, Thunder GM Sam Presti refused to bash Durant for leaving, instead thanking him for his time, repeatedly noting that Durant had earned the right to make this choice, and discussing what the Thunder can do next. When asked how fans should react to Durant leaving, Presti said they should feel grateful, because Durant means more to Oklahoma City than basketball.

"How should they feel about him? You know, listen, I'm not going to tell people how to feel or not to judge or what have you. I just think that what he represented for the city was something larger than basketball. I think that he arrived at a time where the city was also on an upward trajectory, a 20-year-old young man in an aspirational city. People kind of snicker and kind of sneer when we talk about that kind of stuff, but my guess is you're probably not doing that right now.

"You know, we talk and you guys would hear me say, this connection to this community, and the typing would stop and the eyes would roll. But I was saying that truthfully and authentically because I know how this business works, and I know that these days are possible. And we need to recognize what exactly took place here over the last eight years and recognize it and celebrate it.

"They should feel thankful, grateful. They should not — I can't tell them not to be disappointed, but the one thing I would also say is the city should be incredibly proud of what they've helped create for the Thunder. It's not possible without that. They need to carry that on. They need to carry on the spirit and the fight and the grit, because that was here before the Thunder. That was here before the Thunder, that spirit, that ability to continue to press forward. That's in the water here.

"I think all of us, Kevin included, was a beneficiary of that approach and what's in Oklahoma. So my message would be, carry on. Carry on and continue to be proud of what it is that you represent. It's much bigger than the Thunder."

The Thunder are often regarded as one of the best organizations for culture in the NBA, and Presti's answer shows why.

The Thunder will take a major step back without Durant, but with Presti leading the way in either a full-on rebuild or a re-tool, the team seems to be in good hands.