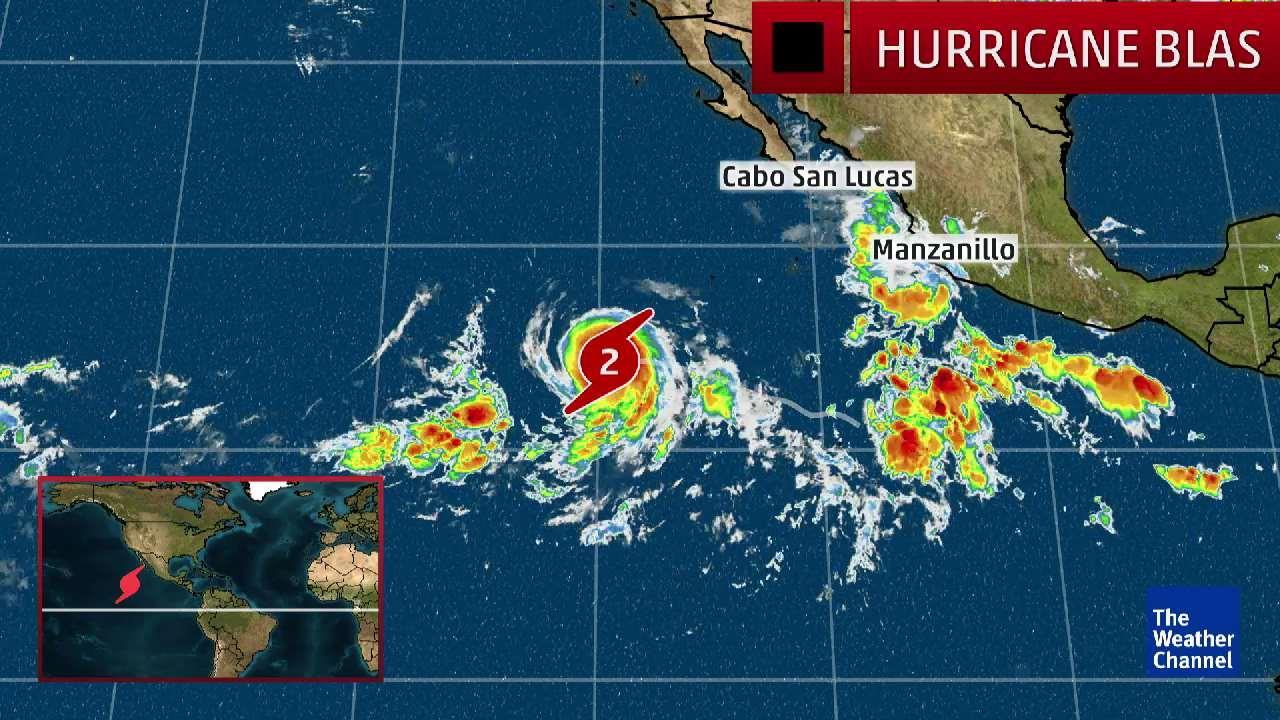 Hurricane Blas has rapidly intensified and will become the season's first major hurricane (Category 3 or stronger) on Tuesday in the eastern Pacific Ocean.

Here's the latest from the National Hurricane Center: 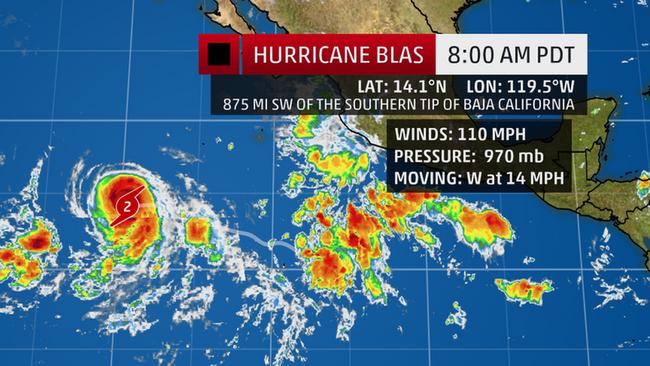 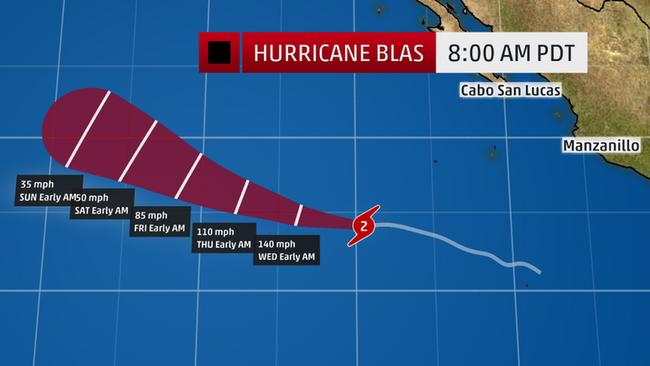 The red-shaded area denotes the potential path of the center of the tropical cyclone. Note that impacts (particularly heavy rain, high surf, coastal flooding) with any tropical cyclone may spread beyond its forecast path.

Related: See 15 of the deadliest hurricanes ever:

15 PHOTOS
15 of the deadliest American hurricanes ever
See Gallery

15 of the deadliest American hurricanes ever

Hurricane Hugo made landfall as a Category 4 storm in South Carolina. It caused 21 deaths in the US and resulted in $7.1 billion of damage. At the time, it was the costliest storm in US history.

While not an official hurricane, Allison clocks in as the costliest and deadliest tropical storm in US history, causing 41 deaths and costing more than $5 billion in damage. The storm started over the Gulf of Mexico near Texas, then traveled east, causing floods like the one pictured here in Houston, Texas.

Hurricane Irene, the first storm to hit the US since Ike three years earlier, made landfall in North Carolina as a Category 1 storm. The storm eventually made its way up to New York City, bringing flooding -- like the kind pictured here in Puerto Rico -- and causing $7.3 billion in damage overall.

Hurricane Floyd was a catastrophic storm because of the rain it brought along. The rain caused extreme flooding from North Carolina on up as the Category 2 storm traveled up the East Coast.

The Great Atlantic Hurricane of 1944 was also devastating to New England, with 64 deaths and more than $100 million in damage. The storm was a Category 3 as it sped up the coast, hitting the Carolinas, Rhode Island, and Long Island before downgrading to a Category 2 in Maine.

Hurricane Agnes, as seen in this image made it all the way inland to Pennsylvania. Although it was only a Category 1 storm (with winds from 74-95 mph), it still caused 122 deaths and caused $2.1 billion in damage.

The third costliest storm in US history, with $29.5 billion in damage, occurred in September 2008. Starting off the west coast of Africa, Hurricane Ike made its way over the Caribbean and into the Gulf, making US landfall in Texas as a Category 2 storm.

Hurricane Camille formed in the Gulf of Mexico and hit Mississippi as a Category 5 storm. Camille caused more than 256 deaths and clocks in as the second most intense hurricane to hit the US.

Nicknamed "Long Island Express," the storm hit Puerto Rico as a Category 5 storm before charging north and hitting Long Island, New York and Connecticut as a Category 3 hurricane. The storm was responsible for more than 256 deaths.

With $71.4 billion in damage, Hurricane Sandy was the second costliest hurricane in US history. The Category 1 storm pummeled New York City, flooding the city's transportation systems and leaving thousands of homes destroyed.

It's looking more and more like Hurricane Joaquin won't make landfall in the US and join the list of most horrific storms in US history.

The U.S. started naming storms with women's names starting in 1953. Hurricane Audrey, the first storm of the 1957 hurricane season was the deadliest of the 1950s. It originated in the Gulf of Mexico, making landfall in Texas as a Category 4 storm. This image of the storm shows just how far hurricane imaging has come.

This Category 4 storm swept into the Gulf of Mexico right under Key West, Florida(pictured), landing as a Category 3 storm in Corpus Christi, Texas. Anywhere from 600 to 900 people died in that storm.

Hurricane Katrina is arguably the most notorious storm of the 21st century. The storm made landfall as a Category 5 near Miami before striking Louisiana as a Category 3 storm. Katrina was the third deadliest, and costliest hurricane in U.S. history with more than 1,200 deaths and $108 billion in damage.

This hurricane was the second deadliest in US history, with more than 2,500 deaths. The Category 4 storm made landfall in Palm Beach on September 10, 1928. Puerto Rico got hit hard as well, with winds at 144 mph.

The deadliest hurricane in US history happened at the turn of the 20th century. The Category 4 of 5 hurricane -- with winds anywhere from 130-156 mph -- made landfall in Galveston, Texas (pictured), then headed north through the Great Plains. Anywhere from 8,000 to 12,000 people died in the storm.