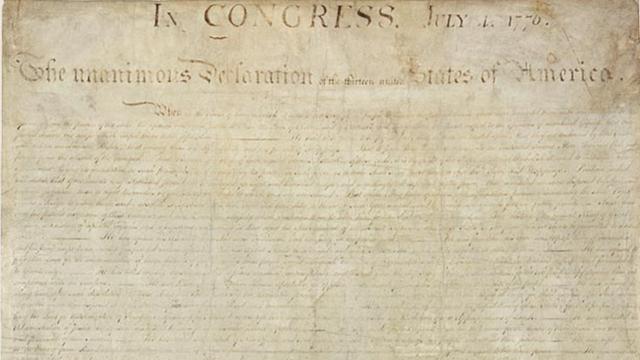 This weekend, Americans will hold barbecues and parades to celebrate the signing of the Declaration of Independence, a document that's endured to this day as an icon of American freedom. Many of the men who signed the Declaration continue to be revered today as heroes of liberty — but not everyone's reputation is so glorious.

Richard Stockton, a New Jersey lawyer, is known as the only person to sign the Declaration of Independence and later recant his signature.

Imprisoned by the British for adding his name to the Declaration, Stockton signed an oath of allegiance to King George III to secure his freedom that likely invalidated his original support.

At first glance, he seems like a traitor — but his story is much more complex. Wikimedia CommonsStockton hailed from a wealthy family and was educated at the College of New Jersey, later known as Princeton University, according to "What They Didn't Teach You About the American Revolution," a book by Mike Wright.

He owned one of the largest law practices in the colonies and was highly regarded by King George III. His wife, Annis Boudinot, was a poet who often corresponded with George Washington.

Stockton originally held a moderate view on the subject of American autonomy and pushed for better representation in Parliament. He was even given royal appointments — a seat on the royal executive council in New Jersey and on the bench of New Jersey's Supreme Court.

But in the wake of the hated Stamp Act, Stockton resigned his royal appointments and joined the fight for a complete break from England. He was chosen to represent New Jersey in Congress and traveled to Philadelphia.

Accounts indicate that Stockton insisted on hearing both sides of the debate before making a decision but was swayed to support independence by the powerful argument of John Adams. He concurred in the final vote and signed the Declaration.

In late 1776, Stockton was placed on a committee to inspect the northern Continental army. Then, he found out the British had invaded his home state.

Stockton was able to move his family to safety, but he was captured and placed in the notorious Provost Prison in New York, where he was subjected to starvation and extremely cold temperatures. On the day of his capture, British Admiral Viscount Howe and his brother General William Howe had issued a proclamation, offering a pardon to any American revolutionaries who would sign a loyalty oath and become obedient to the King. Stockton accepted the offer after five weeks and was released from prison.

But his struggles were far from over. British General Cornwallis had used Stockton's New Jersey estate as a headquarters before wrecking the house and burning all the books and furniture. Stockton left prison penniless, in extremely poor health, and with his reputation at risk. He later signed another oath, declaring his allegiance to the state of New Jersey and to the United States. To make a living, he reopened his law practice and trained new students. He died of cancer at age 51.

It's not certain that Stockton's acceptance of the British pardon in late 1776 was actually a recant of his earlier Declaration signature. Some contend that he didn't actually repudiate his support — he just made a promise to no longer participate in the war.

(Photo by: PHAS/UIG via Getty Images)

But others say his oath to the British effectively nullified his support for the Declaration. When he resigned from Congress in 1777, a fellow Declaration signer wrote in a letter that Stockton was unable to act because of his "late procedure." And another Congressman called him "much spoken against for his conduct."

Whether or not he spurned his revolutionary ideals to gain release, he probably faced the harshest consequences out of all fifty-six men who signed the Declaration — prison and a nasty place in history.