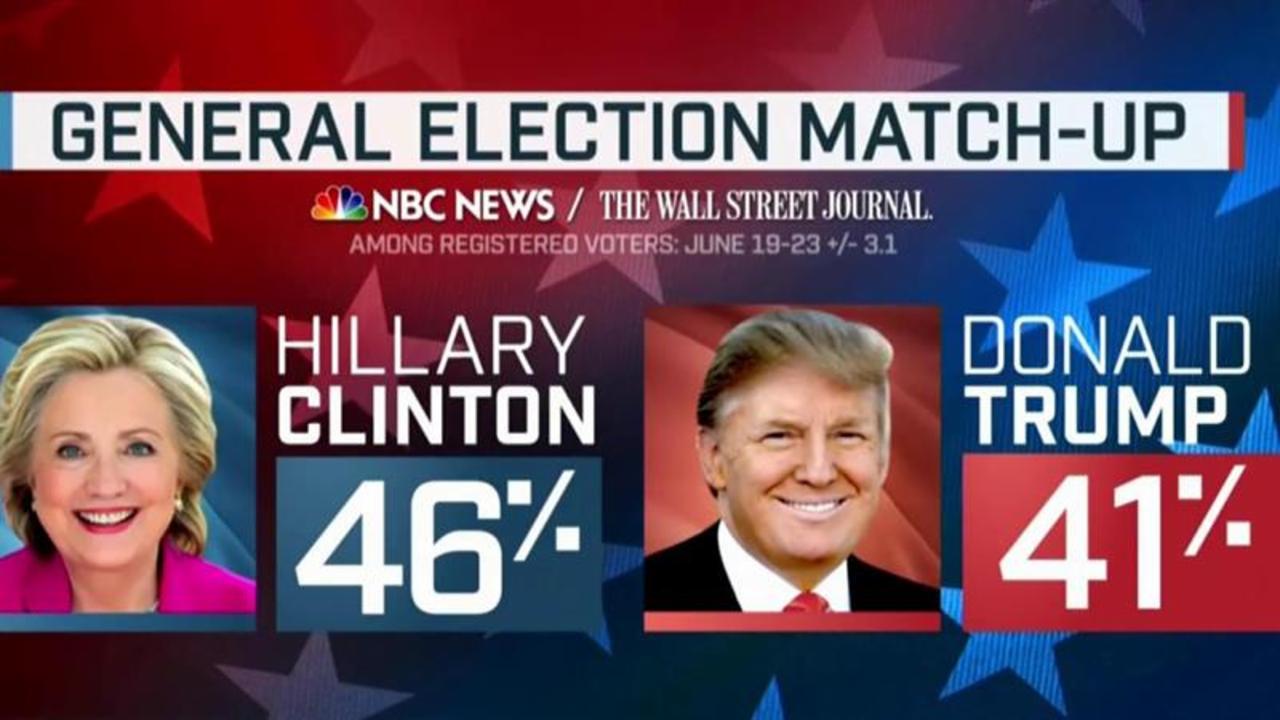 With both parties now having their presumptive nominees and with new battleground-state polling and maneuvering to chew on, we've updated our NBC News battleground map.

The result: Hillary Clinton maintains her advantage, having 255 electoral votes in her column to Donald Trump's 190; 93 are in Tossup. Back in May, it was Clinton 253, Trump 190, Tossup 95. The big changes from two months ago: We moved Florida from Tossup to Lean Dem; Nevada and Pennsylvania from Lean Dem to Tossup; Utah from Likely GOP to Lean GOP; Mississippi and Montana from Lean GOP to Likely GOP; and New Jersey from Lean Dem to Likely Dem.

Clinton over-performing in diverse states; Trump holding his own in states with large white working-class populations

Like in May, our Tossup designations are very (small c) conservative; we'll be more aggressive after the conventions. But for now, anything that appears to be a 5-point state or less sits in the toss-up column. Two forces seem to be at play here. First, Clinton is over-performing in diverse states like Florida and North Carolina -- or to put another way, Trump is VASTLY underperforming in these states. The exception, however, is Nevada, where both private and public polling shows a close contest that actually leans Trump's way right now. (Trump's strength is Reno, by the way). The second force at play is that Trump is holding his own and even slightly over-performing in states with large white working-class populations like Pennsylvania. (Yes, most public polls show Clinton ahead in the Keystone State, but note that Clinton's Super PAC is now on the air there, and that Vice President Biden will campaign there with Clinton next week.) But Trump is also faring worse in more upscale white states like Utah.

Speaking of Trump's disadvantage in diverse states, here's an ad that caught our eye. Colorado Republican Rep. Mike Coffman's first ad of the cycle features a series of female and minority voters offering testimonials about Coffman's work for his constituents. "He's not like other politicians," says one woman, while the next follows up with "he's not like other Republicans." In Coffman's minority-heavy district - which Obama carried in the last two elections - this kind of direct separation from his own party's presumptive nominee is likely the surest path to keeping his head above water in the age of Trump. We bet you'll see quite a few more pitches like this from Republicans in swing districts who can't afford to count on Trump-driven white turnout alone. Coffman's ad also reinforces the conventional wisdom that Trump is struggling in diverse swing states and districts.

The New York Times reports that Attorney General Loretta Lynch will announce that she will accept the recommendations of career FBI prosecutors about whether to bring charges related to Hillary Clinton's use of a personal email server. It's a decision she probably SHOULD have made weeks or months ago, for appearance's sake. But her hand was forced after reports of her private meeting at the Phoenix airport with Bill Clinton earlier this week. The drumbeat for her to distance herself from the investigation would have only grown louder through the holiday weekend if she didn't go ahead and rip the Band-Aid off today, and there even likely would have been Democrats agreeing on the need for a special counsel. Clintonworld, on the one hand, is probably sighing with relief at Lynch's move. On the other hand, Clinton's fate now rests in the hands of James Comey's FBI, period, with no safety net from the attorney general anymore. By the way, Brooklyn has to be asking itself if the campaigns should have a senior political aide traveling with the former president 24/7? This was an unforced error that perhaps a senior staffer should have been able to foresee.

NBC News confirms the Washington Post's reporting last night that Newt Gingrich, in addition to Chris Christie, is being formally vetted by the Trump campaign. Sources in Trumpworld have underscored that other candidates - including folks like Sen. Bob Corker and Indiana Gov. Mike Pence - are still in the mix, although it's not clear the degree to which they've been subjected to the vetting process. Christie and Gingrich would represent a doubling down on political star power (they're the shortlisters with the highest name ID) at the expense of some pretty clear liabilities Christie is deeply unpopular in his own state and is still dealing with fallout from Bridgegate; Gingrich, like Trump, dealt with his own scandals, has two ex-wives and is even older than the presumptive nominee at 73. One thing the two men do have going for them, other than bombastic personalities that could dovetail with Trump's? Both are willing to do the job, which we can't definitively say for some of the other shortlist names being tossed around. And remember: Christie's been a loyal soldier from the moment he endorsed his former foe. He may end up being the default choice for a candidate who prizes loyalty and needs someone he can trust.

The Washington Post reported last night that Newt Gingrich and Chris Christie are the leading candidates to be Trump's running mate... Trump praised Christie and Scott Brown in New Hampshire as "people I want involved" but added "I don't want to say short list." ... NJ.com has a good rundown of the continuing saga of where Christie's cell phone was during the height of the Bridgegate scandal...NBC News reports that Mike Pence is "in play" for the VP slot as well... Elizabeth Warren took on big tech companies like Google and Apple in a speech in Washington D.C.

Donald Trump (along with Sarah Palin and a host of other speakers) appears at the Western Conservative Summit in Denver.

Don't forget to check out the political unit's rolling minute-to-minute coverage of all the latest 2016 developments at the On the Trail liveblog at NBCNews.com.