NEW YORK - A park in Brooklyn has rented a quartet of goats to control weeds and unwanted vegetation in an ecologically friendly way.

The Nubian goats, Horatio, Eyebrows, Minnie and Hector, can be seen grazing along a berm separating Brooklyn Bridge Park and the traffic heavy on the Brooklyn-Queens Expressway. 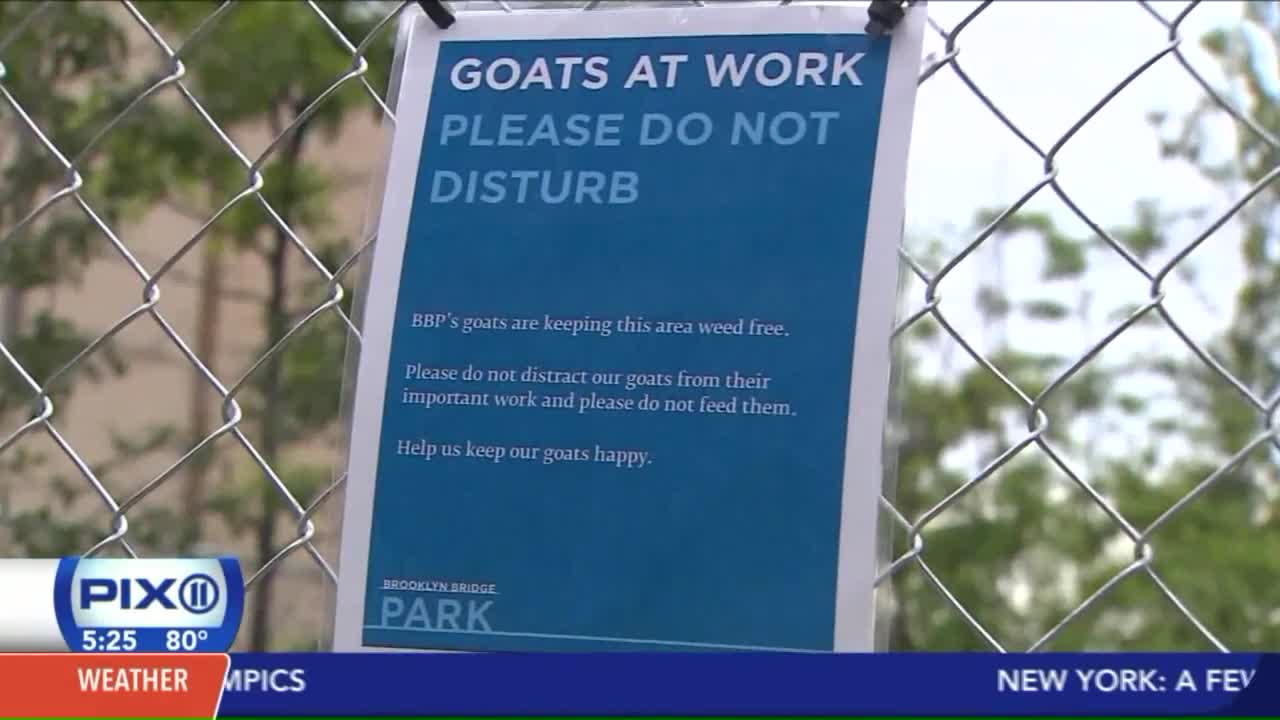 Rebecca McMackin, director of horticulture at the organic park, said using synthetic herbicides wasn't an option and goats were the most logical, adorable and fun alternative.

"They can manage the hills, no problem. They eat the weeds and then translate that into nutrients for the berm, so the plants are getting fertilized and they select out the weeds from the grasses," she explained.

The adolescent goats were rented for the summer from Green Goats, a goat farm in Rhinebeck, New York, which specializes in the use of goats for landscape restoration and maintenance.

Bizarre pets in New York City
Cyrus Fakroddin and his pet goat Cocoa take a taxi ride in New York, April 7, 2012. Cocoa is a 3-year-old Alpine Pygmy mixed goat who lives with its owner Fakroddin in Summit, New Jersey. They frequently take trips into Manhattan to enjoy the city. Fakroddin raised Cocoa since she was 2 months old and treats her like a human. "She doesn't like goats, she doesn't like farms, she likes the people and the city." Fakroddin said. Picture taken April 7, 2012. REUTERS/Allison Joyce (UNITED STATES - Tags: SOCIETY ANIMALS)
Handler Jorge Garcia-Bengochea holds Honor, a miniature therapy horse from Gentle Carousel Miniature Therapy Horses, as they are greeted by a child outside Kravis Children's Hospital at Mount Sinai in the Manhattan borough of New York City, March 16, 2016. REUTERS/Mike Segar
Deke Breuer feeds his dog Cahlupa some lasagna in Times Square in the Manhattan borough of New York, September 4, 2015. Breuer, originally from Detroit, have been living and traveling for the last few years and has taught his dog many tricks. REUTERS/Carlo Allegri TPX IMAGES OF THE DAY
A man eats a sausage as his pet rat rests on his shoulder at Union Square in New York, June 13, 2013. REUTERS/Eduardo Munoz (UNITED STATES - Tags: ANIMALS SOCIETY)
A man with a cat on his head walks outside 71 Broadway in lower Manhattan where former IMF chief Dominique Strauss-Kahn is living under house arrest in New York City May 25, 2011. REUTERS/Mike Segar (UNITED STATES - Tags: CRIME LAW BUSINESS POLITICS)
Resident Chris Roland walks his pet turtles Cindy (L) and Kuka up Madison Avenue in the Upper East Side of the Manhattan borough of New York September 4, 2014. Roland has had the turtles for years and walks them daily he said. REUTERS/Carlo Allegri (UNITED STATES - Tags: SOCIETY ANIMALS)
Jason Loewenstein cleans up after his pet pig, Emmett, while taking the animal for a walk in New York March 8, 2012. REUTERS/Lucas Jackson (UNITED STATES - Tags: ANIMALS SOCIETY)
A pet is blessed during the "Blessing of the Animals" at the Christ Church United Methodist in Manhattan, New York December 7, 2014. REUTERS/Elizabeth Shafiroff (UNITED STATES - Tags: ANIMALS RELIGION SOCIETY)
French bulldog Watson is wheeled to a ring for judging at the 2016 Westminster Kennel Club Dog Show in the Manhattan borough of New York City, February 15, 2016. REUTERS/Mike Segar
Henry, an African spurred tortoise, walks in the grass of Central Park as his walker Amalia McCallister sits in New York, U.S., May 19, 2016. REUTERS/Shannon Stapleton TPX IMAGES OF THE DAY
Up Next