Orphaned ape snuggles with teddy bear with a heartbeat 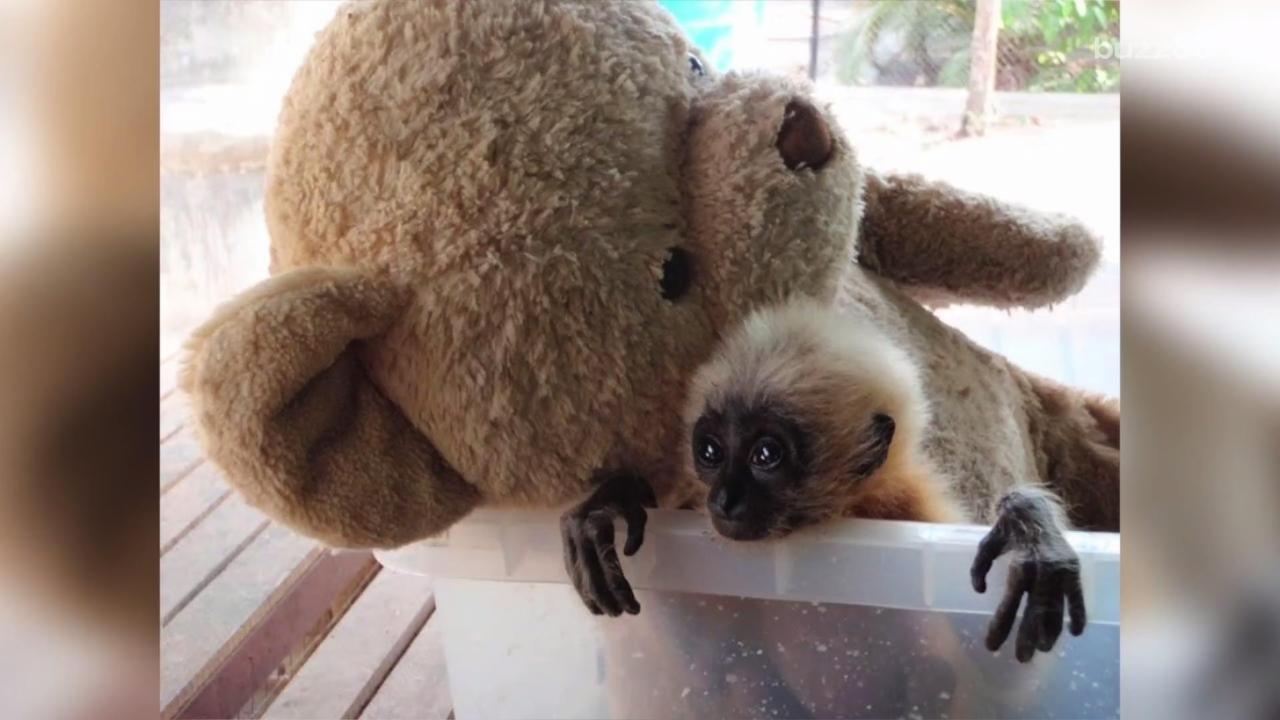 Ignacious is a Golden-cheeked gibbon who prefers to go by "Iggy." The cute little ape was separated from his parents before he was even a year old.

Iggy was found alone in a tree, suffering from various different health issues. He was certainly weak and malnourished.

SEE ALSO: Dogs are a wonderful source of comfort after a tragedy -- here's why

Now, things are looking up for the little guy, because Iggy lives at Phnom Tamao Wildlife Rescue Center in Cambodia with his new mother figure: A teddy bear.

He snuggles with his teddy, finding comfort in her battery powered "heartbeat."

The rescue center typically uses these bears with the simulated heartbeats when they want to comfort the animals but do not want to risk them getting too attached to humans.

Unlikely animal best friends
(Photo by Inti St Clair via Getty Images)
(Photo by Mark Newman via Getty Images)
(Photo by GK Hart/Vikki Hart via Getty Images)
(Photo by Wayne R Bilenduke via Getty Images)
(Photo by Dorgie Productions via Getty Images)
(Photo by Fuse via Getty Images)
(Photo via Alamy)
(Photo by Gail Shumway via Getty Images)
(Photo by James Balog via Getty Images)
Kruger National Park, South Africa. (Photo by Heinrich van den Berg via Getty Images)
(Photo by Albert photo via Getty Images)
Friends sitting in the sun, Kalahari, South Africa
(Photo via Shutterstock)
A lamb and a cat playing draughts, watched over by a bantam, at Langford, Somerset. (Photo by Fox Photos/Getty Images)
Dog Poppy and meerkat Timon in the bath at their home on July 14, 2011 in Dronfield, England. This meerkat and dog have been inseparable ever since four-year-old Timon was sent packing by his meerkat mob. The friendly animal found comfort in the arms of owner John Bent's dog, Poppy, and the unlikely pair have formed a mob of their own - which includes John, his wife, Sally, and their two children. You wouldn't expect a meerkat to be friends with a dog, explained hospice service manager Sally. They tend to stick very much to their own kind. The couple, from Dronfield in Derbyshire, has a collection of exotic critters, which started with a pair of skunks three years ago. Since then their menagerie has grown to include meerkats, raccoons, coatis and kinkajous. However, it is the relationship between six-year-old Chihuahua-Maltese Terrier cross Poppy and Timon, which is most surprising. The are inseparable, said John, who owns a surface coating company. Timon came into the house and instantly struck up a relationship with Poppy, who is just about as small a dog as you can get. Now they do everything together. They go for walks together and play together until they fall asleep on the sofa together. (Photo by Nick Obank / Barcroft Media / Getty Images)
Shere Khan the tiger, Leo the lion and Baloo the bear play outside at the Noah Ark Rehabilitation Centre in LOCUST GROVE, GA. Known as the BLT, or Bear, Lion and Tiger, these most unusual and unlikely animal friends are having to go on a diet after being spoilt too much. For not only do Baloo the bear, Leo the Lion, and Shere Khan the tiger have an unnatural bond, they also have a remarkable appetite too. Devouring almost 100 pounds worth of meat and vegetables a week between them, the rescued big beasts had developed something of an obesity problem. Staff at Noah's Ark Animal Rehabilitation Centre in the state of LOCUST GROVE, GA, decided to stop indulging their favoured guests and to put them on a diet after they each gained 100lbs. (Photo by Barcroft USA / Getty Images)
KATMAI NATIONAL PARK, AK - UNDATED: ***EXCLUSIVE***A female coastal brown bear and one-year old grey wolf relax together after fishing for salmon at the Hallo Bay estuary in the Katmai National Park, Alaska. In the seemingly most unlikely animal partnership ever this wild brown bear and grey wolf look just like they are fishing buddies. Showing a heartwarming moment when the pair - both wild -decided to forget their differences, the bizarre duo took an end-of-day break together just three feet apart. Both had spent hours trying to land a big catch during the first day of the annual salmon run in the remote Alaskan wilderness at Hallo Bay estuary, Katmai National Park. The pair - a 700lb female bear and one-year-old wolf - were both spotted by photographer Chris Dodds, 42, from Franklin Centre, Canada. He said: 'They were just three feet apart and they didn't seem the slightest bit worried about each other. It was very unusual. They looked just like a pair of fishing buddies and stayed together like that for at least two hours.' (Photo by Christopher Dodds / Barcroft Media / Getty Images)
Great Egret standing on the back of an alligator . (Photo by: Universal Education/Universal Images Group via Getty Images)
Unlikely friends Green parrot dog and cat Venezuela. (Photo via Alamy)
(Photo by Les Stocker via Getty Images)
(Photo by Ger Bosma via Getty Images)
(Photo via Getty Images)
(Photo by GYRO PHOTOGRAPHY via Getty Images)
Up Next

Iggy loves his teddy, and thanks to his new owners, he is now healthy and happy. The rescue center even describes Iggy as "extremely vocal," noting that he steals anything within his reach and is constantly showing off his swinging skills.

Despite his remarkable recovery, there are no plans to release Iggy back into the wild. Iggy's caretakers believe his natural habitat is too dangerous due to deforestation and illegal logging.

Although, with a bear as cute as the one he has to snuggle with, chances are Iggy is happy right where he is.

More from AOL.com:
100 kids who didn't have beds got to sleep over at AT&T Stadium
'Hey Mom!' Soldier surprises West Jordan woman after 4.5 years away
This dog may be the world's oldest pooch ... and you won't believe who she belongs to