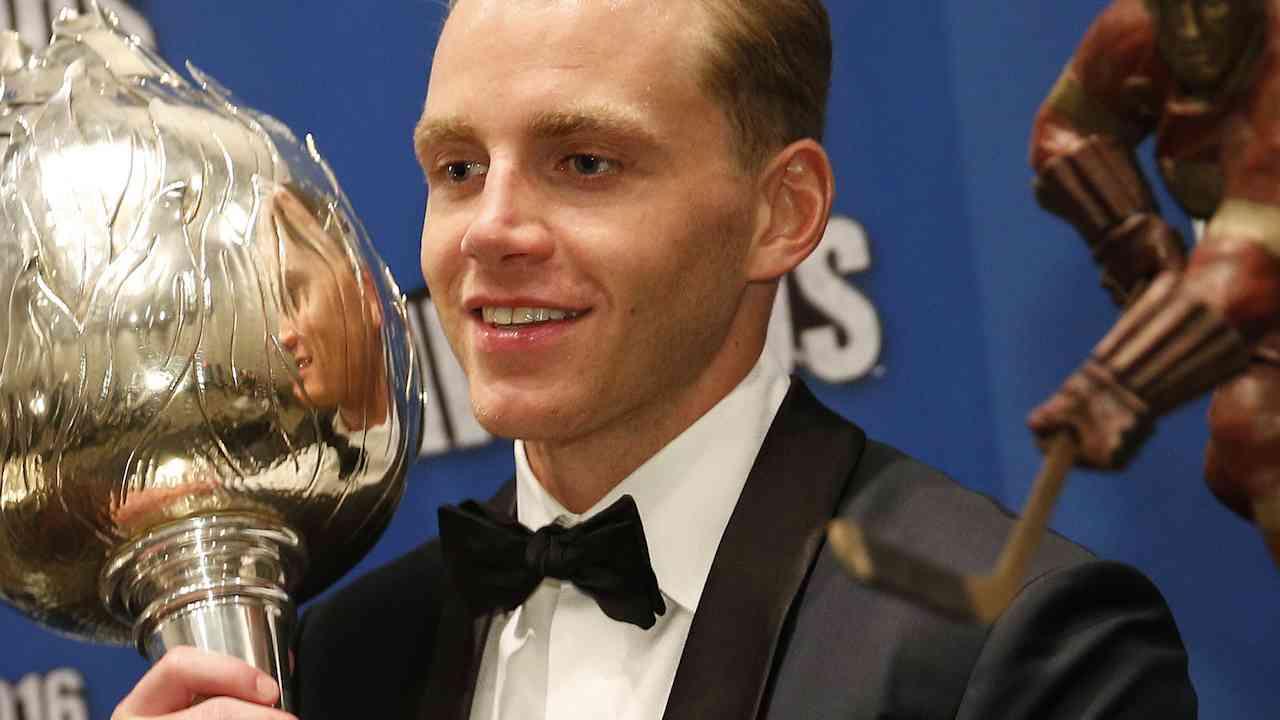 Kane, who enjoyed a career-best season, beat out Pittsburgh's Sidney Crosby and Dallas' Jamie Benn to receive the award at a ceremony in Las Vegas. Kane produced 46 goals and 60 assists for Chicago, who went out in the first round of the playoffs this season.

SEE MORE: Las Vegas is getting an NHL expansion team

"We have the best fans, whether at home or on the road. It's almost like every game is a home game," Kane said.

Kane received 121 first-place votes and appeared on each of the 150 Hart ballots cast for 1,395 points.

Crosby, named on 145 ballots, including 11 first-place tallies, finished second with 800 points, followed by Benn with 637.

Kane had a troubled start to the season after the 27-year-old was accused of raping a woman at his offseason lakeshore home in Hamburg, a Buffalo suburb, in the early hours of Aug. 2.

THE BEST NHL PHOTOS FROM THE PAST SEASON:

NHL photos of the year
GLENDALE, AZ - APRIL 11: Sam Gagner #9 of the Arizona Coyotes skates out onto the ice before the NHL game against the Anaheim Ducks at Gila River Arena on April 11, 2015 in Glendale, Arizona. (Photo by Christian Petersen/Getty Images)
WASHINGTON, DC - JANUARY 01: Alex Ovechkin #8 of the Washington Capitals celebrates after scoring a first period goal against the Chicago Blackhawks during the 2015 NHL Winter Classic at Nationals Park on January 1, 2015 in Washington, DC. (Photo by Rob Carr/Getty Images)
BOSTON, MA - MARCH 28: Henrik Lundqvist #30 of the New York Rangers allows a goal by Milan Lucic #17 of the Boston Bruins in the first period at the TD Garden on March 28, 2015 in Boston, Massachusetts. (Photo by Jim Rogash/Getty Images)
SAN JOSE, CA - MARCH 02: Devante Smith-Pelly #21 of the Montreal Canadiens is checked into the glass by Brenden Dillon #4 of the San Jose Sharks at SAP Center on March 2, 2015 in San Jose, California. (Photo by Ezra Shaw/Getty Images)
UNIONDALE, NY - MARCH 29: Tyler Kennedy #26 of the New York Islanders skates in warm-ups prior to the game against the Detroit Red Wings at the Nassau Veterans Memorial Coliseum on March 29, 2015 in Uniondale, New York. The Islanders defeated the Red Wings 5-4. (Photo by Bruce Bennett/Getty Images)
UNIONDALE, NY - APRIL 11: The New York Islanders and the Columbus Blue Jackets take the opening faceoff in their game at the Nassau Veterans Memorial Coliseum on April 11, 2015 in Uniondale, New York. This is the last regular season game to be played in the building as it stands now. The team will relocate to the Barclay's Center in the Brooklyn borough of New York City starting in the 2015-16 season. (Photo by Bruce Bennett/Getty Images)
PHILADELPHIA, PA - APRIL 20: Andrew MacDonald #47 of the Philadelphia Flyers celebrates after scoring against the Washington Capitals during the second period in Game Four of the Eastern Conference Quarterfinals during the 2015 NHL Stanley Cup Playoffs at Wells Fargo Center on April 20, 2016 in Philadelphia, Pennsylvania. (Photo by Patrick Smith/Getty Images)
WASHINGTON, DC - APRIL 14: Wayne Simmonds #17 of the Philadelphia Flyers checks Karl Alzner #27 of the Washington Capitals during the first period in Game One of the Eastern Conference Quarterfinals during the 2015 NHL Stanley Cup Playoffs at Verizon Center on April 14, 2016 in Washington, DC. (Photo by Patrick Smith/Getty Images)
VANCOUVER, BC - MARCH 27: Matt Bartkowski #44 of the Vancouver Canucks gets his helmet adjusted during their NHL game against the Chicago Blackhawks at Rogers Arena March 27, 2016 in Vancouver, British Columbia, Canada. (Photo by Jeff Vinnick/NHLI via Getty Images)
WASHINGTON, DC - MARCH 04: Eric Staal #12 of the New York Rangers checks T.J. Oshie #77 of the Washington Capitals during the second period at the Verizon Center on March 4, 2016 in Washington, DC. (Photo by Bruce Bennett/Getty Images)
Up Next

In November, a county prosecutor said Kane would not face rape charges because the accusations made by the woman contained inconsistencies and were not backed up by credible evidence.

Holtby tied Martin Brodeur's NHL record for most wins in a season with 48, and finished with a 2.20 goals-against average and .922 save percentage.

Kings defenseman Drew Doughty earned the Norris Trophy for top defender after helping Los Angeles finish third in the league in goals-against per game. He also added 51 points on the season.

Washington's Barry Trotz won the Jack Adams Award for best coach. The Capitals won the Presidents' Trophy with 120 points and set a franchise record for total wins with 49.