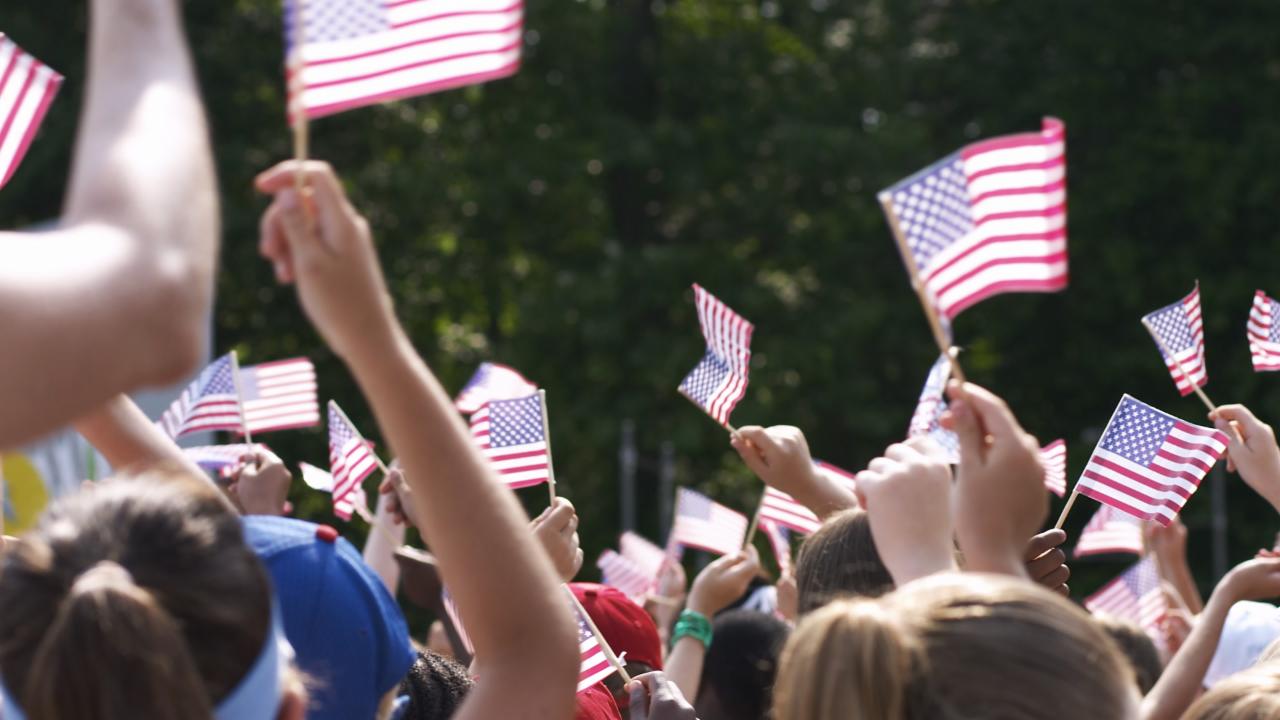 The Fourth of July is a popular time to gather with friends and loved ones — and spend money.

In 2015, Americans spent $3.6 million on flags and $257.8 million on fireworks. Revelers spent a combined $6.6 billion on food over the weekend and drank $1 billion worth of beer. All in all, the average household spends roughly $346.50 over the July Fourth weekend on food and drinks, transportation and other supplies.

Freedom isn't free, but it doesn't have to break the bank, either. Here are some ways to celebrate the 4th of July for less than $10.

According to the American Farm Bureau Federation, the classic backyard barbecue is one of the only Fourth of July ideas that is actually becoming less expensive. A 10-person cookout costs roughly $55.84 — or about $5.58 per person, which is 3 percent cheaper than it was last year. The estimated cost of groceries includes hot dogs, burgers, buns, pork spare ribs, ketchup, mustard, chips, potato salad, chocolate milk, lemonade and watermelon.

Light up the night sky this Independence Day by setting off fireworks yourself. Retailers like OnlineFireworks.com have a large selection of buy one, get one free packages that start under $10.

Fireworks injuries are at an all-time low, but it is still critical to follow all instructions and never allow children to use these devices unsupervised. It's also important to note that fireworks laws vary from state to state and are sometimes inconsistent even among different counties. Before purchasing any fireworks, check with the American Pyrotechnics Association for a directory of state laws.

3. Have Fun with Sparklers

If you're not up to putting on a full fireworks display, opt for the slow-burning fun of sparklers. Prism Fireworks sells 72 packs of red, white and blue sparklers for $9.99.

Be warned that sparklers can and do cause injuries. Because sparklers can burn at 2,000 degrees, it's important to hold them at arm's length, dunk them in water before tossing them in the garbage and always keep them separate from other fireworks.

Start by purchasing a basic white shirt or tank top — available at Walmart for about $5. Then buy or scour the house for painter's tape, star stickers, blue and red spray paint and cardboard.

After placing 50 star stickers on the top left portion of the shirt, apply the tape in horizontal stripes on the bottom half and opposite the stars. Lay the shirt down over a piece of cardboard to protect the underlying surface. Then spray-paint the stripes red and the area with the stars blue.

Remove the stickers and tape and poof — you're a patriot on a budget.

Buy several bandanas in red, white and blue and cut each one into four squares. Fold each square into a triangle and iron it to create a sharp crease. Next, attach the triangles to a long ribbon in a repeating red, white and blue pattern and drape the finished banner loosely, like a sagging clothesline.

A trip to New York City is expensive, but it's free to watch America's largest Independence Day fireworks display from the comfort of your own home. 40,000 fireworks will light up the sky over the Hudson River during the annual Macy's 4th of July Fireworks Spectacular.

NBC begins broadcasting at 9 p.m., and the first shell is set to ignite at roughly 9:25 p.m. This year marks the 40th anniversary of the event, and Macy's promises it will be the best one yet.

7. Have a Red, White and Blue Water Balloon Fight

Although holding a water balloon fight on a hot summer day doesn't require much structure, PartyGamesNow lists the rules for an organized July Fourth water balloon toss, which pits two teams against each other. You can pick up a pack of red, white and blue Bunch O Balloons for $9.99 at Target.

There is perhaps no better way to show your national pride than to fly the symbol of American freedom — the flag. Amazon sells big, heavy-duty embroidered flags with brass grommets for as low as $4.69.

Visit the American Legion site for rules regarding how to fly, handle and dispose of Old Glory properly.

There are tens of thousands of charities dedicated to serving the needs of veterans and military personnel, and many of them accept donations of just $10.

Charity Navigator offers a comprehensive list of organizations. Donate to groups based on what they do, the military branches on which they focus or even their geographic locations.

Hobby's Delicatessen & Restaurant in Newark, N.J., delivers its famous salamis to hungry troops overseas through a program called Operation Salami Drop. This Independence Day, you can share the holiday goodness with a soldier who is far from home. For exactly $10, you can drop a salami of your own.

Apple pie is so associated with the U.S. that people often joke about things being "as American as apple pie."

Better Homes and Gardens offers a recipe for a cheap, simple Apple-Berry Pie in a Jar that features a big, red star made out of fruit. You'll need the following ingredients, which cost less than $1 combined: sugar, flour, salt, butter and milk. The other ingredients, blueberries and apples, cost as little as $1.50 per pound and $1.77 per pound respectively.

Favors LTD sells high-quality, round cork coasters with several choices of patriotic imagery. They start at less than $1 each and become cheaper the more you buy.

With just a kite and a little bit of wind, the whole family can enjoy endless hours of fun this Fourth. Stay on theme with a patriotic motif. You can score an assortment of America-themed kites for under $10 on the Oriental Trading Company website.

Just remember to supervise young children, as kites can present a choking hazard.

If you can't find red, white and blue ice cream to enjoy on the Fourth, you can always top your favorite flavor off with patriotic sprinkles, like the Merica sprinkle mix, currently available on Etsy for $3.50.

Additionally, families can purchase a box of Firecracker Popsicles, available in the classic red, white and blue pattern. Eight packs have been spotted for just $1.

With 12 kebab sticks ($1.99 for 100), a pack of marshmallows (45 cents per ounce), frozen raspberries and blueberries, you can make dessert kebabs that come together to form an American flag. Use the blueberries in the upper-left corner in place of the stars and thread the other ingredients together to form the corresponding red and white stripes.

This article originally appeared on GOBankingRates.com: 15 Ways to Celebrate the 4th of July Under $10

More from GOBankingRates.com:
Best and Worst States to Retire Rich
10 Ways the Weather Affects Your Spending Habits
21 Things You Should Never Do With Your Money

RELATED: How to Throw a Red, White and Brilliant Fourth of July Party 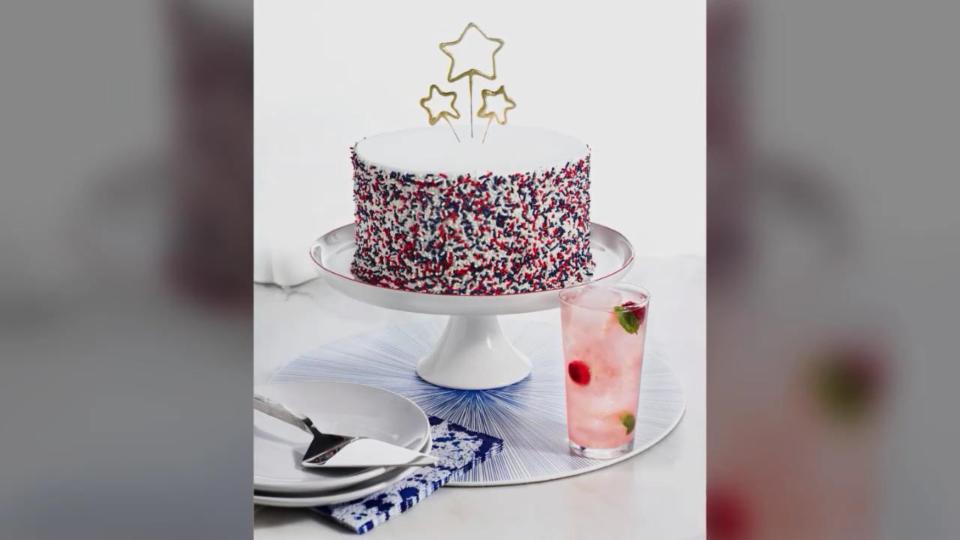