By Susan Cornwell and Timothy Gardner 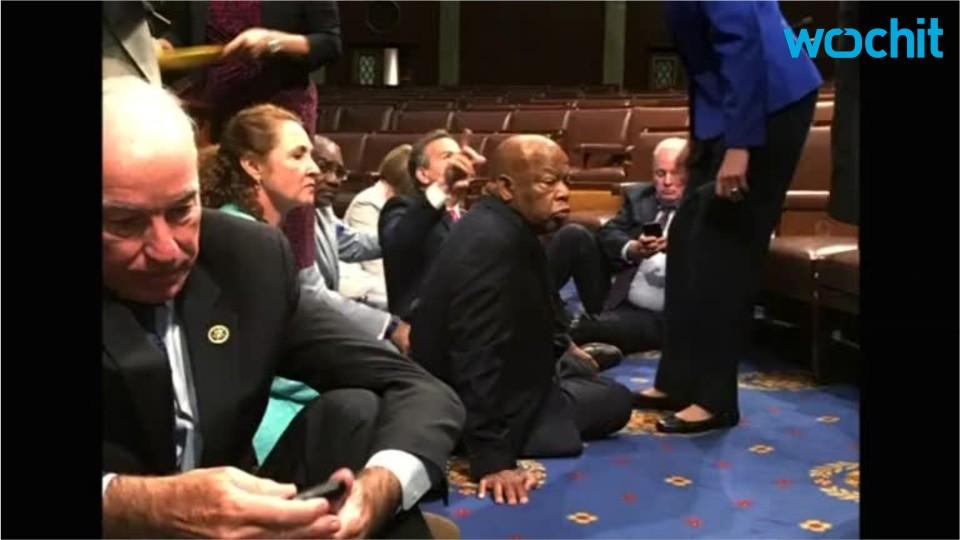 WASHINGTON, June 22 (Reuters) - Democrats staged a "sit-in" on the floor of the U.S. House of Representatives on Wednesday demanding the chamber remain in session until the Republican leadership agrees to a vote on gun control legislation following the Orlando mass shooting.

Chanting "No bill, no break!" scores of Democratic lawmakers joined in the protest. A similar action happened in August 2008, when House Republicans, then in the minority, took the floor to demand a vote on allowing offshore drilling.

House Democrats stage sit-in to force gun control vote
I'm on the House floor with @repjohnlewis & Dems staging a sit-in to demand action on commonsense gun legislation https://t.co/byIivby5gG
Time to occupy the House to demand action. #NoBillNoBreak #DisarmHate https://t.co/C7BZpzNvxL
Pleased to be w/my @HouseDemocrats colleagues to take Floor to #EndGunViolence now. #Enough #NOMORESILENCE https://t.co/1UWWr3XVVa
Joining w/ @repjohnlewis &dozens of my colleagues for House sit-in for a vote to prevent gun violence #NoBillNoBreak https://t.co/Lg4cM9Gzj0
Democrats are still sitting on the floor of the House demanding votes on gun safety bills #NoBillNoBreak https://t.co/7aMWYXGK10
They can turn off the cameras but they can't keep us quiet. #NoMoreSilence. We want a vote on gun reforms https://t.co/ETZX1WM03b
My colleagues & I have had enough. We are sitting-in on the House Floor until we get a vote to address gun violence. https://t.co/rTqrPifuUz
One by one, Democrats, who are sitting in the well of the House chamber, step up to speak. Enough is Enough, they repeat.
Democrats chanting, "No bill, no break!!''
Rep Ted Poe (@JudgeTedPoe) attempted to gavel House back into session; Democrats refused to yield floor; Poe gaveled recess again.
I'm in the House chamber showing solidarity w #NoBillNoBreak. Truly amazing moment. Truly amazing last week. https://t.co/XBSCUkH5BR
Democrats sitting on House floor for 1hour+ demanding votes on gun bills. GOP responded by turning the cameras off https://t.co/RE8HTvO2rM
Up Next

"We are in for the long haul here," House Democratic leader Nancy Pelosi told reporters, saying members intended to continue their sit-in as long as it takes to get a vote on a bill.

But Republican House Speaker Paul Ryan refused to give in to what he called a "publicity stunt" and vowed not to bring up any bill that would take away anyone's right to own firearms.

The Democrats' move echoed last week's filibuster by Senate Democrats to protest inaction on guns in the wake of the June 12 massacre at a gay nightclub in Orlando, Florida, where a gunman killed 49 people and wounded 53 in the deadliest mass shooting in modern U.S. history.

After the Senate talk-a-thon, the Senate's Republican majority scheduled votes on four gun control measures - all of which failed on Monday.

Ryan told CNN he would not follow suit: "They know that we will not bring a bill that takes away a person's constitutionally guaranteed rights without ... due process."

Guns are a potent U.S. political issue. Congress has not passed major gun control legislation since 1994, with gun rights defenders saying such measures infringe on the constitutional right to bear arms.

The House's presiding officer, Republican Representative Ted Poe, entered the chamber around noon (1600 GMT) on Wednesday to find a number of Democratic lawmakers in the front of the chamber chanting, some sitting on the floor.

After banging the gavel in an attempt to clear the protesters, Poe announced the chamber would be in recess and left.

But the Democratic protesters stayed in the chamber into the evening giving impassioned speeches and urging action before a break scheduled to begin this weekend through July 5.

The protest was led by Representative John Lewis, a Democrat from Georgia and veteran of the 1960s civil rights movement.

"We have been too quiet for too long," Lewis told fellow lawmakers. "We will be silent no more."

Democrats urged gun control measures such as tighter background checks and legislation to curb the sale of weapons to people on government watch lists.

Pelosi invoked not only Orlando but a string of other mass shootings in recently years, including the attack a year ago by a white man at a black church in Charleston, South Carolina, that killed nine. "Right now there is an opportunity," she said.

Tweets of support came from outside Congress. "Thank you John Lewis for leading on gun violence where we need it most," President Barack Obama tweeted.

Clinton tweeted: "This is what real leadership looks like."

Lawmakers also took to social media to document their demonstration with video and pictures, particularly after House Republicans shut down video cameras that normally document the chamber.

Outside the Capitol, nearly 50 people gathered in solidarity at a rally organized by Everytown for Gun Safety, the advocacy group backed by former New York Mayor Bloomberg.

Many House Republicans said they viewed the problem differently from Democrats. "We don't view the fact that someone becomes radicalized and decides to kill a bunch of Americans ... as a gun problem," Representative John Fleming of Louisiana said on Wednesday. "We view that as a terrorist problem."

The Orlando shooter, Omar Mateen, 29, pledged allegiance to Islamic State during the rampage in which he used an assault rifle and pistol. Authorities believe Mateen, a U.S. citizen of Afghan descent, was self-radicalized and acted alone.

The gun measures that failed in the Senate on Monday included one that would have prohibited gun sales to people on a broad range of government watch lists.

Senators from both parties are pushing for a compromise. Senate Majority Leader Mitch McConnell said he would schedule a vote on a measure by fellow Republican Senator Susan Collins that would prevent about 109,000 people on "no-fly" and other surveillance lists from purchasing guns.

Collins has said it could be voted on this week, and Senate Democratic leader Harry Reid said on Wednesday he would support it.

The powerful National Rifle Association has said it opposed the compromise bill, calling it unconstitutional.