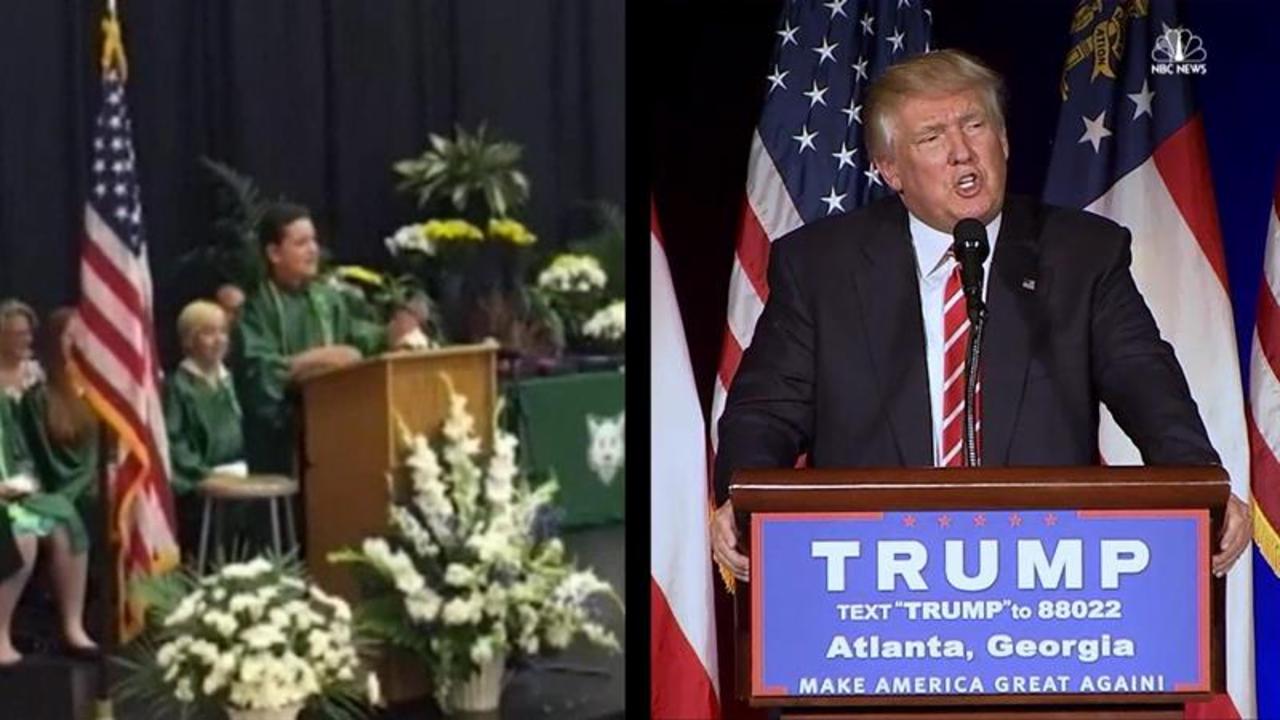 It's a plan so crazy that it just might work — or it might not be that crazy at all.

Badly in need of moderate and independent voters' support in November, on Thursday, presumptive Republican nominee Donald Trump made an all-out play for union members' backing.

The billionaire's pitch to the working man and woman came as Democrat Hillary Clinton, unsurprisingly, scored the support of the AFL-CIO, the labor umbrella group representing some 12.5 million members.

Trump pointedly invoked Clinton primary rival Bernie Sanders in a lengthy statement arguing that he, not Clinton, would be a better choice for union voters.

Click through some of Donald Trump's most controversial tweets:

"Hillary Clinton and her husband have made hundreds of millions of dollars doing favors and selling access to Wall Street, special interests and oppressive foreign regimes," Trump's statement reads.

"As Bernie Sanders said, 'Why, over her political career, has Wall Street been the major campaign contributor to Hillary Clinton?'" Trump continued, clearly trying to capitalize on Clinton's enthusiasm gap with so-called #BernieOrBust voters. "They own Hillary Clinton and she will do whatever they tell her to."

It's far from clear that union members would flock to the presumptive Republican nominee in a big way, despite Trump's somewhat protectionist views on trade deals like NAFTA and the Trans-Pacific Partnership.

But New York City Councilman Joseph Borelli, a Staten Island Republican and co-chairman of Trump's campaign operation in New York, says the real-estate magnate's team is smart to present a sharp contrast with Clinton to workers in Rust Belt swing states. If Trump could peel off states like Ohio, Pennsylvania and Michigan, his path to victory would be much clearer.

"You [saw] Bernie Sanders making a significant dent in Democratic support in those states," Borelli said in an interview. "And a lot of union members are moderate Democrats: They're Democrats by enrollment, but perhaps not Democrats by ideology."

He continued: "If you're someone in a swing state who has seen an economic downturn mostly as a result of the economic policies of both establishment Democrats and Republicans, yeah, I think you might strongly consider voting for Donald Trump — despite what your union might say."

Fear factor: The union did speak up after Trump ominously suggested a Clinton presidency would "economically destroy poor communities, African-American and Hispanic workers on trade, immigration, crime, energy, taxes, regulation and everything else."

AFL-CIO President Richard Trumka called the Republican out on Twitter, suggesting Trump's attempts to woo labor didn't square with his apparent past disinterest in the travails of union workers.

Stuart Appelbaum, president of the Retail, Wholesale and Department Store Union and executive vice president of the 1.3 million-member United Food and Commercial Workers International Union, is also unconvinced Trump will have real appeal to labor voters.

"When union members look at this race seriously and think about the things Donald Trump has said that would impact their work lives, they will be running to the voting booths to vote for Hillary Clinton," Appelbaum, a Clinton superdelegate from New York, said in an interview.

Trump "says he admires Scott Walker, who took a sledgehammer to unions in Wisconsin. He rails against trade deals — but then claims that outsourcing creates jobs. His Trump-branded products are made overseas in places like Mexico and China," Appelbaum said.

"People may be angry, but Trump's approach would make things worse for working people. And as working people understand who Trump is and what he's about, they will not support him — because he does not support them."

Nothing to lose but the White House: There's no question Trump — who's been attacked as a union-buster by critics of his career in real estate — may have an uphill battle in convincing traditionally Democratic labor voters to come his way.

And even as the GOP hopeful tries to persuade moderates and disaffected Sanders supporters to vote for him, pro-Clinton union forces are making their own deliberate attempt to pull Trump voters across the aisle.

Upshot: Trump's courtship of labor may not end in a true romance. But the fact that his team is putting up a fight for those voters at the very least signals a realization that primary season is over and it's time to think outside the traditional GOP box.