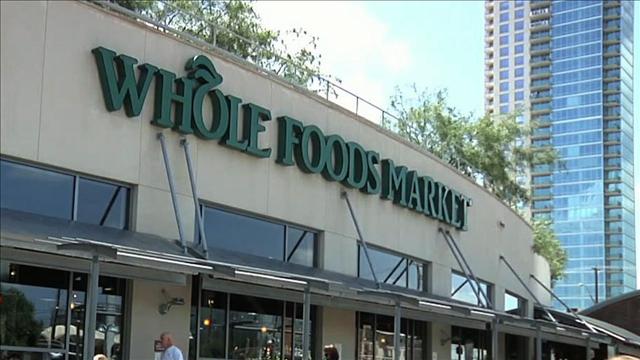 Whole Foods has been cutting prices to try and shed its "whole paycheck" image.

But it's still one of the most expensive places to buy food, according to Wedbush Securities analysts.

They compared prices at Whole Foods stores in half a dozen cities to those at various competing supermarkets to determine which stores were cheaper.

They found that Whole Foods is about 15% more expensive than other "conventional" supermarkets, such as Kroger, Wegmans, and Safeway.

Analysts also compared Whole Foods' prices to those at "specialty" grocers, including Trader Joe's and Sprouts Farmers Market, and found that Whole Foods was about 19% more expensive.

Whole Foods charges the biggest premium over its competitors in the meat department, where prices are roughly 40% more expensive than those at rival supermarkets.

This is an improvement over last year, however, when Whole Foods charged about 50% more for meats than its competitors, analysts said. The price gap in produce isn't as wide, though. Whole Foods charges about 22% more than competitors for fresh produce, according to the survey.

Overall, Whole Foods is getting closer to its competitors on price. The company's average price premium over conventional grocers has dropped from 23% in the first quarter of the year to 15% in the second quarter.

Analysts said that this improvement is a promising sign for the business. They also seemed impressed by the low prices they found at Whole Foods' new chain of stores, 365 by Whole Foods Market.

RELATED: 11 smart ways to save big at Whole Foods

11 PHOTOS
11 ways to save at whole foods
See Gallery

11 ways to save at whole foods

Be wary of dairy in glass containers

If you grab milk or cream from a glass bottle, you'll be charged for the price of the bottle in addition to its contents. If you must purchase the glass bottle version of the product, be sure to bring it back to Whole Foods next time you're shopping and customer service will give you a voucher.

Bring your own bags

Whole Foods will offer you a five to 10 cent discount from your total for bringing your own bag.

You'll end up paying way more and receiving way less. Always opt for the full version of the fruit or vegetable and prepare it yourself.

Deals on bulk amounts of certain meats vary from location to location. Ask the butcher about what bulk meat deals your local Whole Foods is offering.

Special deals (that only last for a few days or a week) are unadvertised outside of the store but can be found while shopping by their bright yellow tags.

Buy cases of products you like and save 10 percent

Whether it's protein bars or wine, Whole Foods will discount a case-sized version of your product for 10 percent, a well worth it investment if it's a product your consuming often.

Stores will offer specialty Friday-only sales that can offer you major one-day savings.

The store's value brand is extremely well-priced and will offer you the healthiest version of discounted products, as there will be a significantly lower amount of preservatives than other discount brands, according to Whole Foods.

Deals will vary from store to store and are always advertised through social media.

Bring your own containers when shopping the bulk section

When weighing your bulk purchase at checkout, Whole Foods will subtract the price of the weight of your container if you bring your own from home instead of using the ones provided in the store.

The 365 chain was about 23% cheaper than traditional Whole Foods stores and only 4% more expensive than low-price leader Trader Joe's.

Price investments by Whole Foods and the lower pricing found at its new 365 store are encouraging, but we continue to observe lower prices and increased availability of comparable products at conventional grocers. We remain firmly in wait-and-see mode to gauge if the retailer can reach price relevancy with multi-channel consumers.

SEE ALSO: Trader Joe's has a new competitor in the low-price grocery wars