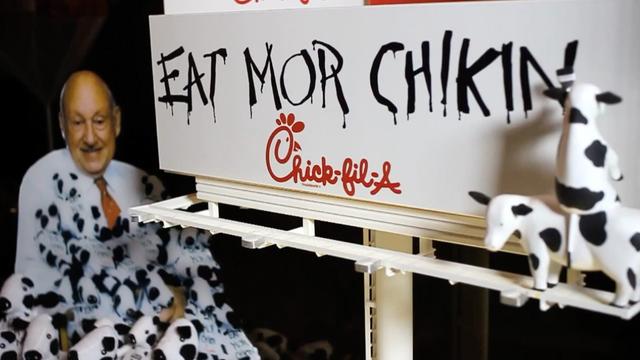 The 25-year-old Texas native, who currently lives in Denver, Colorado, grew up overweight and loving food. At 17 years old, he weight 355 pounds.

"All my life I knew I was big, and I always wanted to lose weight," he said to Business Insider.

But he struggled to find a diet that worked for him.

"I tried all the diets," he said. "Jenny Craig, Atkins, no carbs ... juice diets, the lose 10 pounds in 5 days, all the different things, and none of it worked for me."

But then, when he was 18 years old and headed off to college at Texas A&M University, he had the opportunity make his own choices and figure out how to eat healthily.

He decided to take matters into his own hands by starting to exercise, but what was he going to eat?

Ward had been eating Chick-fil-A since he was a child, and knew it had healthy portions — so that was a good place to start. (It helped that there was a Chick-Fil-A on campus.)

"When I got to college, I said, 'okay. I love Chick-fil-A, I already like Chick-fil-A, let's see if they have healthy options," he said.

He ate Chick-fil-A for several meals per week.

That — coupled with a strength and cardio plan — helped him lose 140 pounds in 11 and a half months.

"I wouldn't say all of it is Chick-fil-A, because I have to make my own decisions," he said, but noted that Chick-Fil-A had "tasty, healthy options that worked for me and...my palate."

Man loses 140 pounds eating Chick-fil-A
live vibrantly https://t.co/TqiTZQy4Gz
#slightwork http://t.co/labkclXFOm
TGIF - just wanna be a better me than I was yesterday. http://t.co/zOcXHsPlcc
I'm at a crossroad between consulting, entertaining or continuing on the corporate track. Praying for discernment. http://t.co/KAHZa1WwqW
Suited and booted. I do what I can #iotarollcall http://t.co/91tmly52M2
Kentucky Derby Ready http://t.co/iJwcDmng41
Up Next

That was four years ago. Ward, who works in sales and is preparing for a move to Houston next month, has been maintaining his weight now. He still goes to Chick-fil-A in Denver, though not as frequently as he used to. "I still get salad, and when I want to splurge, I get the kids' meal six pack [of nuggets]." The local Chick-fil-A knows him, and gives him a free meal once a month for being a loyal customer.

"I'm just a loyal fan." he said. "I think Chick-fil-A is a great brand. It's literally help me change my life because I was on my way to a heart attack or just having a stroke or diabetes in every way. So, I was able to find food that tasted good where I could have a variety of options."

Throughout his journey, he's learned to master portion control — and he's learned a crucial lesson about eating fast food.

"Fast food doesn't have to be, you know, greasy burgers and..artery clogging," he said. "I think that's a misconception or a stereotype. Pretty much every restaurant, of course Chick-fil-A, will have healthy options, they're just a little more expensive," though he stressed that extra money spent from the outset worth it in the long run.

Ultimately, eating Chick-fil-A helped him lose weight because the food boded well with his lifestyle and he enjoyed eating it. It's proof that the best diets are ones you can maintain; it's not all about suffering.

NOW WATCH: Turns out eating fat isn't as bad for you as previously thought

SEE ALSO: Chick-fil-A is doing something no other fast-food chain has done before