John Owen and Matthew Edward Lowe, 20 and 22, are the result of the actor's 25-year marriage with wife Sheryl.

The two strapping young men seem to be living relatively normal lives considering their dad's fame. Matthew graduated from Duke University in May and is apparently an avid fisherman, according to his Instagram.

Check out some of his impressive catches!

Matthew Lowe, Rob Lowe's son, loves fishing
No filter, great day fishing with @robloweofficial in Mexico. Thanks Jamie Jr!!!
Time to leave Hawaii but not before I got one last solid reef dive in. Gotta love steamed Kali and Mu for a last breakfast before heading back to the mainland. Thanks for everything Hawaii.
The smile says it all. I got to experience Panama in CA. #bluefintuna
Sometimes you just gotta go back to the basics and catch 3 limits of lings on swimbaits.
I have a good feeling about this lil guys chances of survival. Only 1 outta every 1000 lives to sexual maturity. PC @tribullchristina
Great trip with everyone, I'm stoked to come back soon, hopefully do a lot more fishing.
First grouper in Mexico thanks to Jessica Sportfishing. Crushed the Cabrilla and found a stray Yellow, not a bad day in Cabo.
God I miss the ocean and throwing the iron on the long rod but this will have to do for now. Photocred @tribullchristina
Not the greatest picture of me but it's been awhile on the fishing front and I was stoked on this healthy Tako for a quick shore dive my first day on the island.
Finally got a wide open tuna bite before I left. #Elnino2015 #saltycrew
Guess the shirt did get me some ghosts! #CaliforniaChrome #ghosts @seasonssportfishing @salty_crew
Up Next

Matthew's little bro, on the other hand, enrolled in Stanford, but is following in his dad's footsteps and taking a stab at acting. He had a guest role on dad's short-lived Fox comedy, "The Grinder." Lowe recently opened up to ET about trying to dissuade his kids from joining Hollywood -- to no avail.

"Here I thought I avoided all the pitfalls of raising actors," Lowe said. "[John] is at Stanford and we're like, 'We did it! We got him into a big school!' He was one of the leading interns in stem cell research. Now he's going to be wearing makeup for a living." 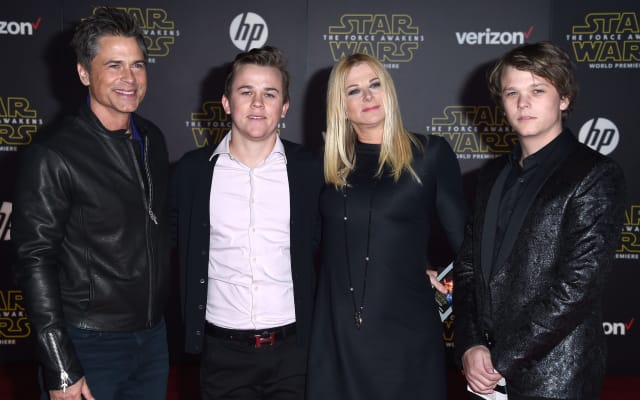 Jokes aside, Lowe has spoken out about raising his sons and giving them a normal life.

"No matter who you are or where you are, your No. 1 job is to raise their family the way you know how, and I've always thought that way, and I've loved every minute of it. And I do think that's my most satisfying accomplishment," he said in an interview.

The three amigos definitely seem to be really close. Lowe often posts snaps on Instagram with his boys working out, singing karaoke and more.

See the dapper family in action:

Rob Lowe on Instagram
Getting ready! Mental Samurai is TONIGHT 9/8 central on @foxtv
Celebrating my #birthday with a #workout and @johnnylowe Whatever your age, be your best! #men #results @profile4men
Comfy.
Me and the boys getting at it last weekend. #karaoke #rock
Golf buddies.
Bonding. #dad #son #ocean
Merry #Christmas from our #family to yours! May your be blessed in the New Year.
Nothing is possible without #family #hollywoodwalkoffame #happy
Home.
At the #Duke game with the birthday boy! Go Matthew. Go Blue Devils. #football
A boy and his (brother's) dog. #Man #BestFriend
The Lowe boys take Hawaii! No fish is safe, no wave is too gnarly. It's on.
Nothing better than having the #boys back home for #summer. Can't believe I got them off the couch for a hike!
#birthday #vegas 21 and done!!
Repping for The Sheriff. #superbowl
Break in the action on set today. #WildBill
Cheers to an awesome holiday! Can't wait to head home to the newest addition to our family - Young Jack! Show me how you brought your dad-game this holiday season for your kids using #DadLife! @CocaCocaLife #Sponsored
New year, same ugly faces 😏 #happynewyears
The Lowe boys in the wilds of Hawaii. #adventure
Up Next

Even though Matthew and John are getting all the attention these days, there's no hard feelings with Lowe.

"Listen, I am fully embracing the old man moniker. They're hot, they're young, they're on it. I'm old, I'm on my way out, everybody knows it. I was chosen last at our family's Turkey Bowl this year. The insults just keep on coming which is why today is so nice."

Old man, our foot! Lowe seems to have found the fountain of youth. Check him out and more Hollywood men who seem to be getting better with age in the slideshow below.

(NO TOUCHIE) Hollywood men getting better with age

More on AOL.com
Bette Midler's daughter looks just like her now!
Everything North West has accomplished in her 3 years of life
James Franco dons women's clothes in funny summer snap