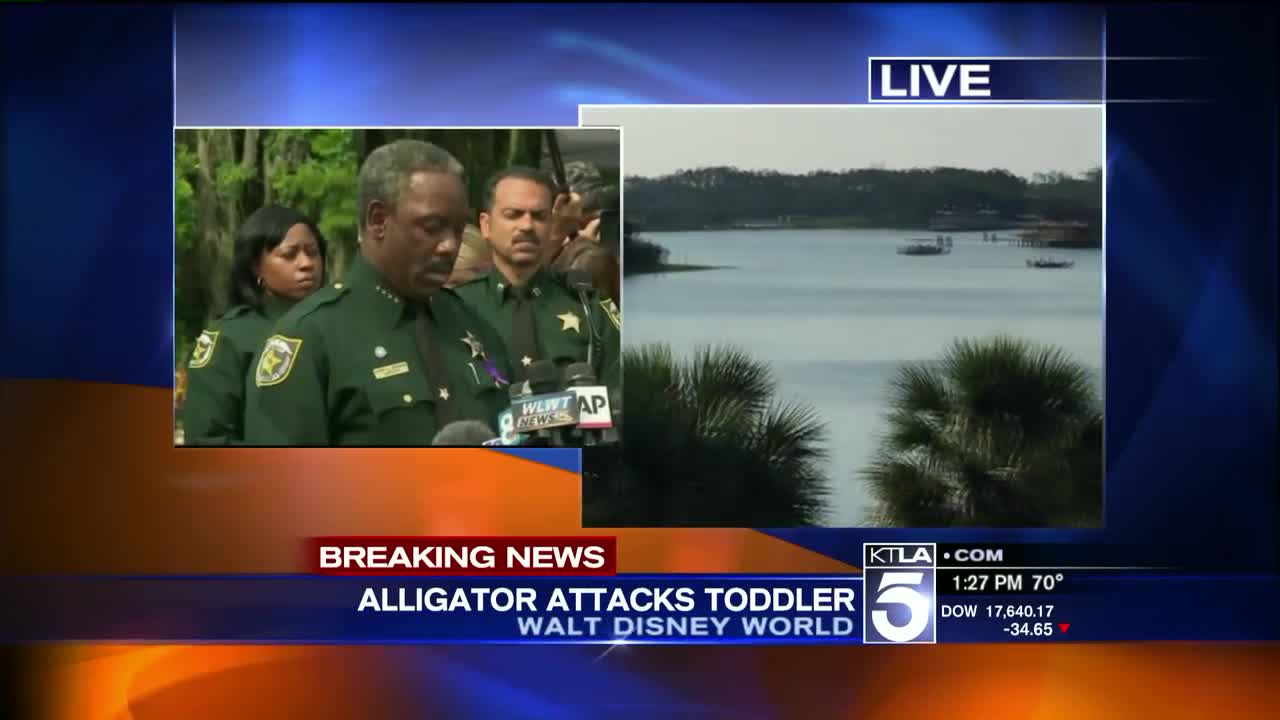 ORLANDO, Fla., June 15 (Reuters) - Police divers on Wednesday recovered the body of a 2-year-old boy who was grabbed by an alligator in front of his family during a vacation at Walt Disney World in Orlando, Florida.

The child was snatched by the alligator as he played at the water's edge on Tuesday night and dragged into a lagoon despite his parents' effort to save him.

Orange County Sheriff Jerry Demings said he and a Catholic priest had informed the family that the boy's body was found near where he vanished and was completely intact.

See social reactions to the incident:

An autopsy would be carried out, Demings added, but the presumption was that the child was drowned by the alligator.

"It was a tough message to deliver," Demings told a news conference. "Of course the family was distraught, but also I believe somewhat relieved that we were able to find their son ... so that they can come to grips with what has happened."

Wildlife officials earlier caught and killed five of the reptiles from Seven Seas Lagoon to examine them for traces of the boy. But Nick Wiley, head of the Florida Fish and Wildlife Conservation Commission, said it was too early to say whether one of those five might be the culprit.

"There is a good chance we already have the alligator because we focused our efforts in that proximity, in that area where this incident occurred," he said, adding that the probe would focus on results of forensic tests and bite marks on the child's body.

The resort closed its beaches and recreational marinas on Wednesday while search teams had scoured the lagoon, a man-made lake reaching 14 feet (4.2 meters) in depth.

The family, who were on vacation from the Omaha, Nebraska suburb of Elkhorn, were named as Matt and Melissa Graves. Their son was named Lane.

There are signs prohibiting swimming at the lagoon but the boy was grabbed while his family relaxed nearby on the shore, authorities said.

The boy's father rushed into the water and suffered minor cuts on his arm as he fought to wrestle his child from the alligator's grasp, said Jeff Williamson, a spokesman for the Orange County Sheriff's Office.

Authorities said the boy's mother tried to rescue him too. A lifeguard on duty also was unable to reach the toddler in time.

Alligators are not uncommon in the Seven Seas Lagoon, Wiley said. Alligators have killed five people in Florida in the last 10 years, according to official state data.

Wiley said the wildlife commission works with the resort to remove "nuisance alligators" - classed as those which have lost their fear of humans - whenever they are reported.

Disney has operated in the area for 45 years and never had this type of incident occur before, Demings said.

The Walt Disney World Resort is the world's most-visited theme park. About 20.5 million people visited the park's Magic Kingdom in 2015, according to the Themed Entertainment Association.

Shares in Walt Disney Co appeared to be unaffected by the incident, closing down 13 cents at $98.27.

A spokeswoman for Walt Disney World Resort said everyone there was devastated by the tragic accident.

William Lopez, 41, an evangelical pastor from San Francisco was on holiday with his wife and seven-year-old daughter. He said he thought a path around part of the lagoon should have been fenced off.

"I feel if we have that kind of aggressive animals we should have been safeguarded," Lopez said. "I hope they do something to correct this so that it never happens again. Because we love to come here."

Disney's Grand Floridian Resort & Spa is described by Disney as a lavish property combining Victorian elegance with modern sophistication. Rooms start at $569 per night before tax, according to its website.

Guests can rent motorized boats for cruising and fishing, or a private lakeside cabana. Children between 4 and 12 years of age also can embark upon "pirate adventures" on the lagoon.

Jim Hill, a theme park historian who runs a popular Disney fan blog, agreed with Demings the company has been "aggressive" about managing the risk from alligators.

But he said that the attack, combined with other recent bad news in the area, could make people reconsider plans to visit Walt Disney World.

The alligator incident came as Orlando reeled from a gunman killing 49 people at a gay nightclub in the city on Sunday before dying in a shoot-out with police.

The night before that attack, singer Christina Grimmie was shot and killed in Orlando, apparently by a deranged fan, while signing autographs after a concert.

"When people think 'the Happiest Place on Earth', right now that's not Orlando," Hill said, referring to a Disney catchphrase for Disneyland.

Edward Jones analyst Robin Diedrich said there might be a slight decline in Walt Disney World attendance, but it would not be material to the company.

"I think most people would reasonably conclude they will get the issue under control and it's probably safe to go to the parks and resorts," she said.

The alligator attack also follows a May 28 incident when a 3-year-old boy fell into a gorilla enclosure at the Cincinnati Zoo, causing zookeepers to kill a gorilla to protect the child.

The Orlando incident reignited a spirited debate on social media over responsible parenting, although some users expressed sympathy for the toddler's family.

"Dear Internet, can we please have a bit more compassion for a family who saw their son dragged away by an alligator?!! #DisneyGatorAttack," tweeted Jamie Lapeyrolerie (@jamielynne82).