Honoring those lost. Kate Middleton and Prince William made a special trip to the U.S. Embassy in London on Tuesday to sign a book of condolences for the 49 victims of the Orlando, Florida, shooting from over the weekend.

The Duke and Duchess of Cambridge signed their special messages in front of a commemorative flag presented to the former Secretary of State Hillary Clinton by the LGBT organization Kaleidoscope Trust.

The Duke and Duchess offering their condolences for the victims of the terrible attack on Orlando's Pulse nightclub pic.twitter.com/ILA4uJU2mr

Their Royal Highnesses have signed the virtual book of condolence for victims of the Orlando shooting #OrlandoUnitedpic.twitter.com/Cfh2OJ5hYW

— The Prince of Wales and The Duchess of Cornwall (@ClarenceHouse) June 14, 2016

"Our hearts go out to all of those who have lost loved ones and to those who have been injured in this unspeakably barbaric act. You are in our special prayers," the royals wrote to the victims' families. 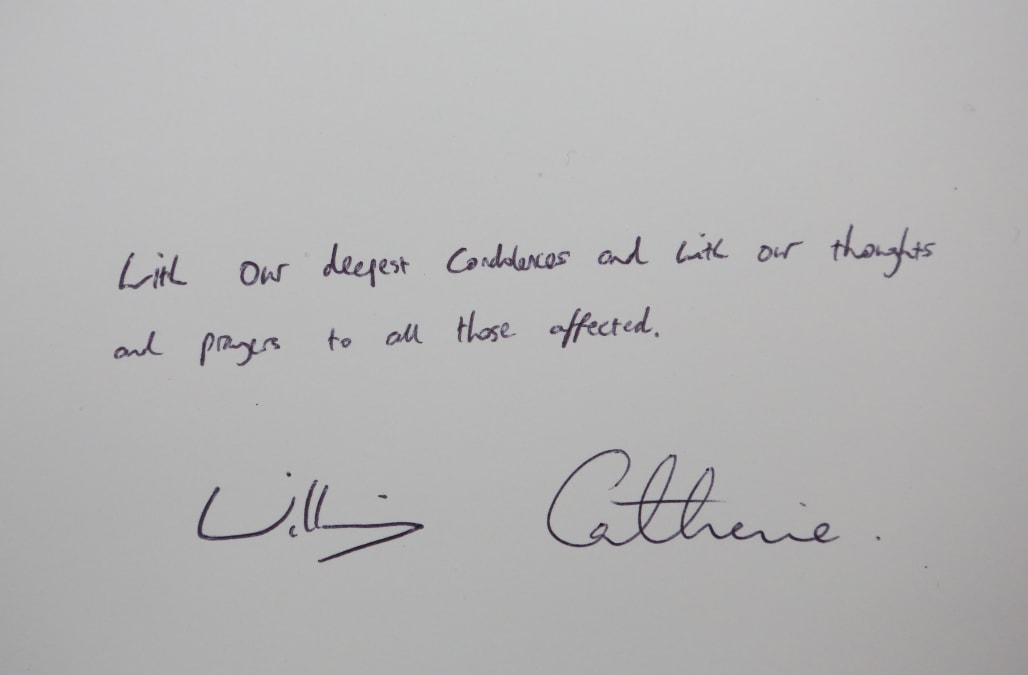 After they signed, William and Kate spoke with representatives from the embassy's LGBT network GLIFAA.

After signing the condolence book TRH spoke to reps from the US embassy's LGBT network GLIFAA pic.twitter.com/8ZSIQJ9p8J

Following the news of the mass casualties from Orlando, Queen Elizabeth, who is currently in the middle of her 90th birthday celebrations released a statement.

"Prince Philip and I have been shocked by the events in Orlando," the Royal Family's Twitter account posted. "Our thoughts and prayers are with those who have been affected."

Over the last few days, the royals have attended Elizabeth's Trooping the Colour ceremony on Saturday and an outdoor birthday party on Sunday. The next day they attended the Order of the Garter Service at Windsor Castle, which honors knights.

Kate stood out at the event in a cherry red dress, coat, and hat after sporting a cream getup for the Trooping the Colour. Sadly her two adorable children, George and Charlotte, were not in attendance at Monday's festivities despite making a precious cameo over the weekend.