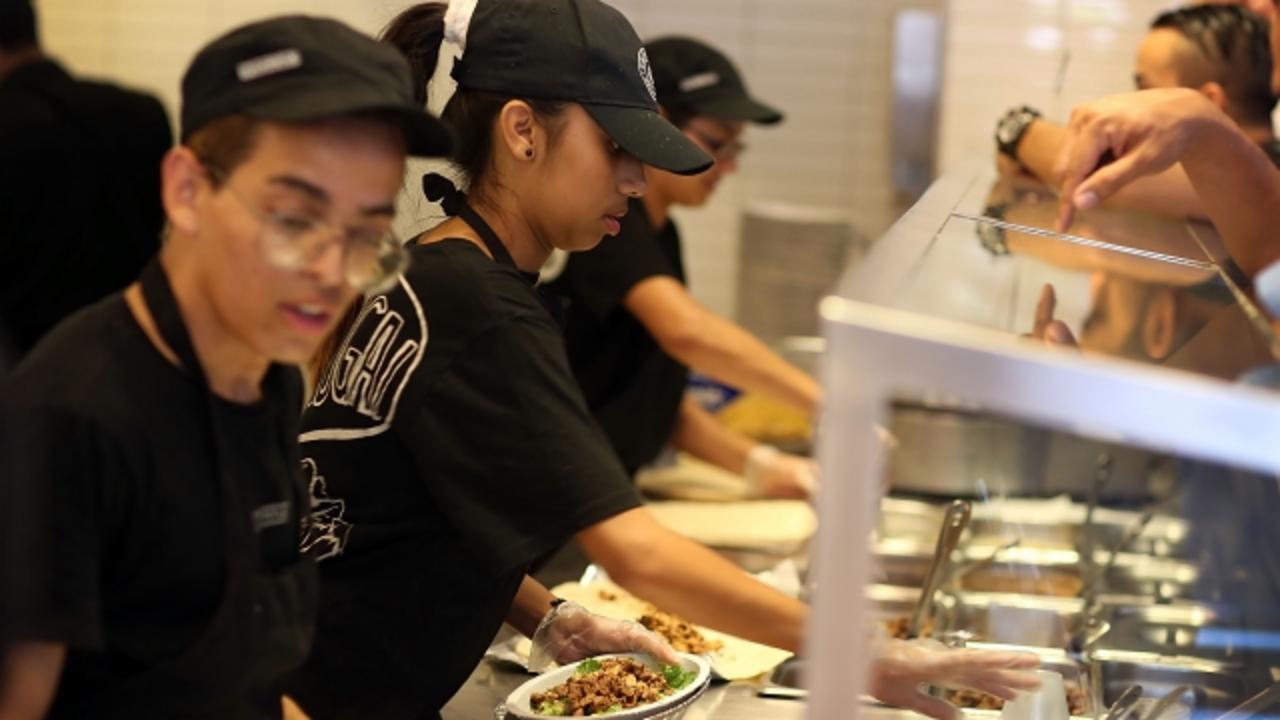 Eight months after the start of Chipotle's E. coli outbreak, one lingering question continues to plague investors and analysts: will the company ever fully recover?

There have been some promising signs that customers are returning to Chipotle. Restaurants are starting to fill up again, and customer surveys show growing positive sentiment for the company.

But it's unclear how much of Chipotle's growing foot traffic has been driven by its multi-million-dollar investment in free burrito promotions, and how much can be attributed to customers actually recovering their trust in the brand.

Chipotle still hasn't answered one question about the business -- and it could mean doom for the company
1. Ask for ‘half and half’ meat

You can get more for your money if you request that the server split your serving of meat into two varieties.

“When you ask for ‘half and half,’ the server tends to be generous on measuring a half serving,” said Kyle James, founder of coupon site Rather-Be-Shopping.com and a regular Chipotle customer. The end result is a bigger, more delicious burrito.

2. Ask for both types of rice and beans

If you really want to super-size your burrito, ask for both white and brown rice, as well as black and pinto beans.

Dylan Grosz, an intern for the website ApartmentList.com, conducted an experiment to see which strategies would net more burrito at no extra cost and wrote about his findings. After ordering five burritos a day for several days, he found that Chipotle customers could get double the rice and beans, simply by asking for both types of each. Best of all, there’s no extra charge for these added ingredients.

3. Get extra fillings for free

It costs extra — $1.95, according to Chipotle’s online menu — to add guacamole to your burrito. However, there are other fillings you can get for free, if you know enough to ask. Grosz found that servers rarely ask customers if they want to add fajita veggies or chili-corn salsa, but these extras are free and can round out a meat-heavy meal. They also increase the overall amount of food you get at no extra cost.

4. Opt for the burrito bowl

Rather than ordering your burrito wrapped in a tortilla, get it in a bowl to net more food, James said. Ask for “half and half” meat and then, as the server fills the bowl with your favorite toppings, politely ask for a little bit more of each.

“Before you know it, your bowl will be huge and can often feed two average adults for under $9,” said James, who eats at Chipotle at least five times a month.

You can even ask for a tortilla on the side. Create the burrito experience on your own, with an even bigger burrito than you’d get by ordering one.

5. Order the kid’s meal for yourself

To avoid overeating and overspending, order a kid’s meal, said Ashley Eneriz, a contributor to the personal finance blog MoneyNing.com. The portions are generous and include two tortillas, three sides (such as meat, cheese and rice), a drink and fruit or chips. If the server says you can’t order the this meal because you’re not a kid, just request something else.

“As long as you are nice about it, then there won’t ever be any issues,” Eneriz said.

Chipotle occasionally offers special promotions on gift cards — especially around the holidays, James said. For example, one of the more common offers is a free burrito with the purchase of a gift card worth $25 or more. So, if you frequently eat at Chipotle, you can use the gift card yourself.

7. Keep your eye open for freebies

Sometimes, Chipotle hands out free food to its customers. For example, on April 16, the chain offered youth soccer players under the age of 14 a “buy-one-get-one-free” deal on burritos, bowls, salads or tacos. All they had to do was show up in their team uniforms.

The restaurant also offered free burritos to people in the wake of closing its stores for a day to train employees on the new safety measures. Follow Chipotle on Facebook or Twitter to learn about its latest promotions.

You can score burritos at a discount if you’re willing to dress up — not in a coat and tie but a costume. James said that, every Halloween, Chipotle offers a burrito for only $3 if you come in wearing a costume.

Typically, Chipotle has a theme that customers must adhere to in order to get the discounted “boorito.” So, be sure to check the fast-food giant’s website or social media pages to find out what the theme is before creating your look.

9. Be friendly to the staff

If you regularly eat at Chipotle, go out of your way to be nice to the servers.

“Being friendly to the staff is a really great way to score some savings,” Eneriz said. “You’ll get a bigger portion most of the time, and you’ll not only make the server’s life more pleasant but yours, too.”

Prior to the outbreak, same-store sales were growing by more than 20%, and the stock was trading at more than $750. Since then, sales have plunged, falling by nearly 30% in the most recent quarter. The stock is now trading around $400.

"One common theme investors and industry experts alike share, at this time, is a lack of certainty on when a recovery will take place, how the company will get there or what the magnitude of Chipotle's resurgence and what it will look like," Deutsche Bank analysts wrote in a recent note.

The analysts predict that sales will start to turn modestly positive by the end of the year, when the company laps the quarter that was initially affected by the outbreak.

But they questioned whether Chipotle's sales and profit margins will ever rebound to levels seen before the outbreak.

"On the positive side, the company still has a base of loyal fans," the analysts wrote. But traffic trends were showing signs of slowing before the outbreak, they note, and the company will face a number of other challenges going forward.

Here are the challenges they outlined:

1. The growth of copy-cat chains. While Chipotle was trying to contain its E. coli outbreak, the company's loyal customers were out discovering new chains.

"While we do not know how many visits will be lost to the competition, logic would dictate that Chipotle will not recover all of those lost visits," analysts wrote. "In addition, management commented earlier this year that they believe some customers may be lost for good."

In fact, Moe's Southwest Grill recently unseated Chipotle as Americans' favorite Mexican food chain, according to a Harris Poll survey of more than 97,000 US consumers.

2. Increased promotional activity across the restaurant industry will force Chipotle to maintain a higher-than-average rate of discounting going forward.

Chipotle has given away tens of millions of dollars in free burritos since February to try and persuade customers to come back to the chain. Customers are now trained to expect these offers, and it will be hard for the Chipotle to go back to charging full price. This will weigh heavily on the chain's profit margins.

"It would stand to reason that the company's full priced sales will fluctuate for quite some time," the analysts write.

The new restaurants may also have lower volumes than more established restaurants as they back-fill existing markets or enter new, less attractive markets, according to the analysts.

The restaurant labor market is under pressure. There are fewer workers for hire, so competitive pay and benefits are becoming more critical for companies like Chipotle. Labor costs are also increasing as local governments across the country pass legislation for a higher minimum wage.

In addition to ballooning labor costs, Chipotle will need to make major investments in technology to stay competitive, according to the Deutsche Bank analysts.

"As many competitors have improved their digital positioning, we have argued that Chipotle has lagged," the analysts write. "The company needs to improve its technology efforts to close the gap with the industry across mobile, kitchen equipment, [and] database management."

SEE ALSO: We went to Sears and saw why the company is imploding