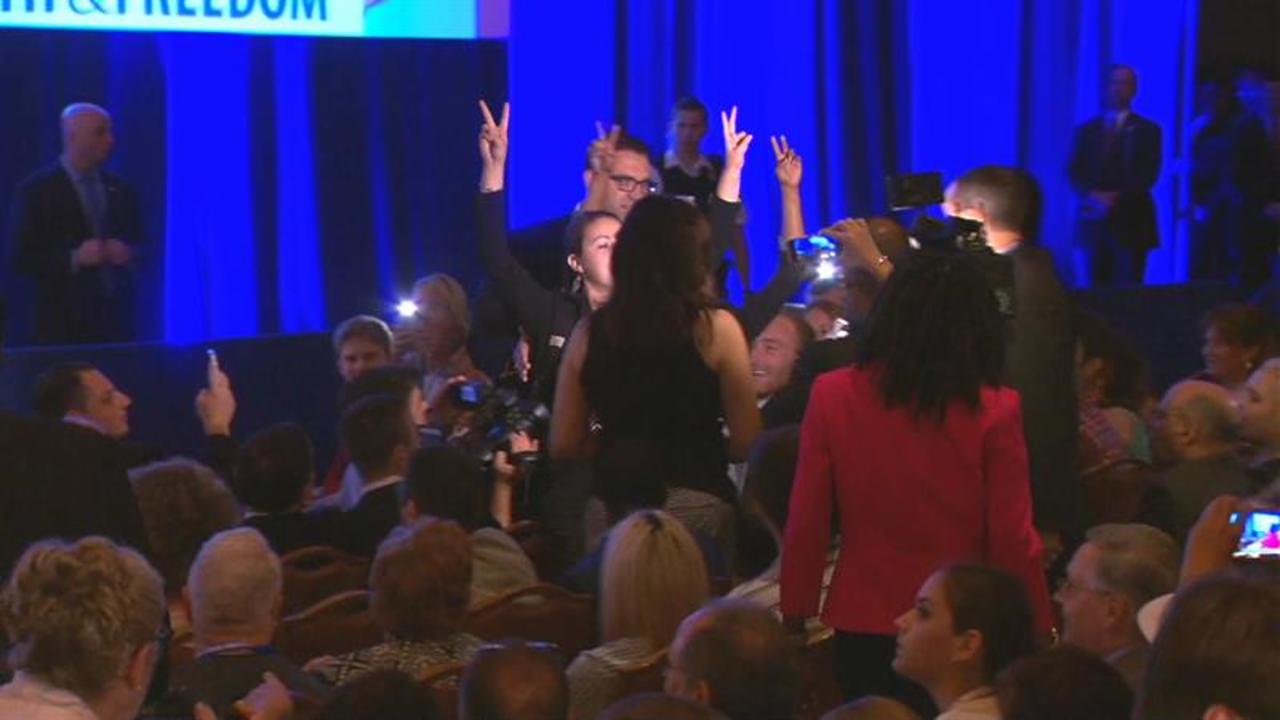 Before the Golden State Warriors managed to win Friday's game against Cleveland Cavaliers, the game was interrupted by a shirtless man running onto the court.

The man was escorted off the court by police after he ran onto the court with the words "Trump Sucks" written on his chest. According to BuzzFeed, the man was taken into custody and the event was not shown on the game's ABC broadcast.

“I like thinking big. I always have. To me it’s very simple: If you’re going to be thinking anyway, you might as well think big.”—Donald J. Trump

"The America We Deserve is Donald Trump's position paper on the major political issues facing our country."

"Real estate titan, bestselling author, and TV impresario Donald J. Trump reveals the secrets of his success in this candid and unprecedented book of business wisdom and advice."

Trump: The Way to the Top: The Best Business Advice I Ever Received (2004)

Trump: Think Like a Billionaire: Everything You Need to Know About Success, Real Estate, and Life (2004)

"It’s not good enough to want it. You’ve got to know how to get it. Real estate titan, bestselling author, and TV star Donald J. Trump is the man to teach you the billionaire mind-set–how to think about money, career skills, and life."

Trump: The Best Golf Advice I Ever Received (2005)

"The host and coproducer of the megahit reality show The Apprentice presents a unique collection of golf advice."

"Donald Trump and Robert Kiyosaki wrote Why We Want You To Be Rich because they saw how the turbulent economic climate would impact the middle class."

Think Big and Kick Ass in Business and Life (2007)

"Donald J. Trump is an icon: the very definition of the American success story. Republican Presidential candidate, reality-television star, and developer of some of the planet's most prestigious real estate, he's also become one of the world's wealthiest men."

"In Trump 101, Trump himself becomes your personal mentor and coach as he shares tips, tactics, and strategies, all designed to help you make the most of yourself, your career, and your life."

Trump Never Give Up: How I Turned My Biggest Challenges into Success (2008)

In Never Give Up, Donald Trump tells the dramatic stories of his biggest challenges, lowest moments, and worst mistakes—and how he uses tenacity and creativity to turn defeat into victory.

Think Like a Champion: An Informal Education in Business and Life (2009)

"Over the years, Donald Trump has written many bestselling books, and he has also written short pieces that summarize his singularly successful tenets on how to live the good life, both personally and professionally."

Midas Touch: Why Some Entrepreneurs Get Rich—and Why Most Don't (2011)

"In Midas Touch, Donald Trump and Robert Kiyosaki ask the question: What’s an entrepreneur’s most important job? The answer: creating high-quality, stable jobs. And in today’s marketplace, “jobs” are in high demand — and so are the skills and the innovation and vision of entrepreneurs."

"Look at the state of the world right now. It’s a terrible mess, and that’s putting it mildly. There has never been a more dangerous time."

Next month, the Republican National Convention will be held in Cleveland at the Cavaliers' stadium, Quicken Loans Arena.

In the end, announcers quickly brushed the event aside and the Warriors beat the Cavs with a final score of 108 - 97.

Topless man with "Trump Sucks" inscribed on his chest tackled and arrested on floor at NBA Finals. pic.twitter.com/j0OqeY8GsX

More from The Hollywood Reporter:
Bill Simmons Breaks Free: His "F—ing Shitty" ESPN Exit, Who Courted Him and Details of His HBO Show
'Ghostbusters' Talk Online Haters, Get Surprised by Original Cast on Kimmel
This Is the One Fashion Trend Blake Griffin Has Yet to Get Behind