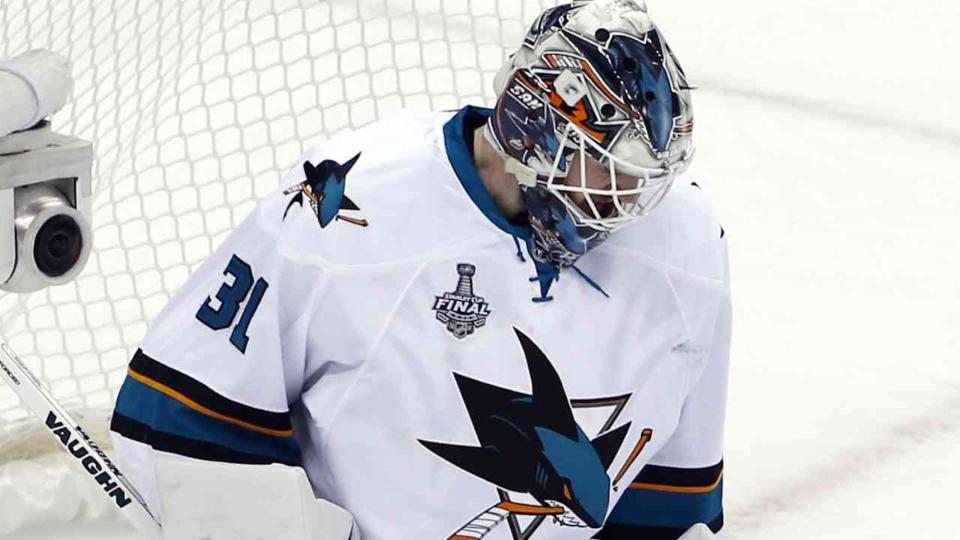 The San Jose Sharks used a first period scoring frenzy to claim a 4-2 win and keep the Pittsburgh Penguins from clinching the Stanley Cup on Thursday to send the series back to the West Coast for Game Six.

Trailing 1-3 in the series and facing elimination, the Sharks got first period goals 1:49 apart from Brent Burns and Logan Couture and another from Melker Karlsson, then turned to goaltender Martin Jones and an air-tight defense to seal a 'do-or-die' victory.

"We needed some big-game performances from guys. Jonesy was one of those guys in a tough environment," praised San Jose coach Peter DeBoer. "We found a way to stay alive and bring it back to San Jose."

The best-of-seven series shifts back to San Jose for Game Six on Sunday with the Sharks still facing a daunting task.

Since the Stanley Cup final went to the best-of-seven format in 1939, teams that have taken a 3-1 series lead have gone on to capture the championship 31 of 32 times.

The Sharks had found themselves in 3-1 hole in a large part because their top scorers Joe Pavelski, Joe Thornton, Burns and Couture had not previously scored in the finals.

But the Sharks' big guns came out firing in Game Five, Burns and Couture tallying within the first three minutes to grab a 2-0 lead and stun an arena record crowd of 18,860.

For the first time in the finals, the Sharks drew first blood, Burns swinging out from behind the Penguins net and picking shortside on rookie Matt Murray just 64 seconds after the opening faceoff.

The mugging seemed to jolt the Penguins who hit back in devastating style as Evgeni Malkin and Carl Hagelin answered 22 seconds apart to put the Consol Energy Center back in full party mode.

By now it was the Penguins in a frenzy and not the Sharks as a relentless Pittsburgh attack shifted into overdrive, hitting the post twice.

San Jose, however, would weather that storm and escape with a 3-2 first period lead when Karlsson converted a nifty tic-tac-toe passing play, before Pavelski added an insurance marker in the third.

The opening period of Game Five produced the most electrifying hockey of the finals with five goals equaling the total of any of the previous games.

Defenses and netminders then took over as Jones frustrated the Penguins attack with a string of spectacular saves before finishing the night by stopping 44 of 46 shots.

"We know we haven't scored many goals, or any, in this series," said Couture. "It's one of the reasons why we're down 3-1. We wanted to come. We didn't want the season to end tonight.

"Obviously it's tough. You get a two-goal lead, it's gone in a matter of a minute, minute and a half.

"But be calm, get back out there, get another good shift. We were able to score again. Melker gave us the lead again. Jonesy did the rest."

A record crowd at Consol Energy Center and thousands more gathered outside to watch the game on a giant screen, some having camped out overnight to secure a prime spot, came ready to watch Lord Stanley's famous mug hoisted on home ice for the first time to go along with three Cups won on the road (1991, 1992 and 2009).

The Sharks job was to play the role of party poopers and played it perfection particularly in a spellbinding opening period that produced the best 20 minutes of hockey of the finals.