Hottest temperatures so far in 2016 arriving east of the Rockies 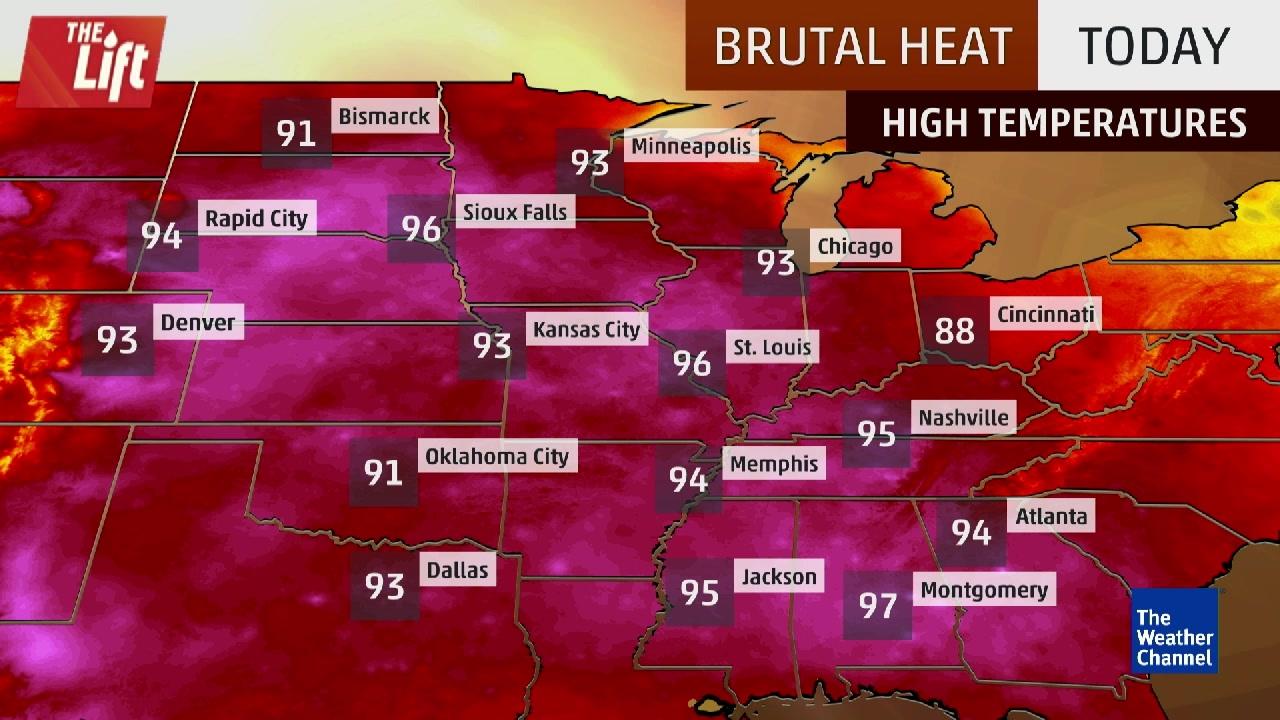 By The Weather Channel

Record highs will be threatened late this week and into the weekend as temperatures climb into the upper 90s and low 100s in the Plains, Midwest and South. In addition, dew points will be high as well, making it feel even hotter for many locations.

For many cities, the temperatures we will see late this week will be the hottest of 2016 so far. Though that is to be expected since the official start of summer is right around the corner.

An upper-level ridge is slowly migrating eastward across the Heartland and it may bring record-breaking temperatures. Highs will be 15 to 25 degrees above average across much of the nation's midsection on Friday and Saturday. Humidity is also on the increase.

Heat advisories will be in effect from early afternoon on Friday into Sunday for portions of South Dakota, Minnesota, Nebraska, and Iowa.

On Friday, warmer temperatures will be felt from the Rockies into portions of the central and northern Plains, as well as into the Midwest and the South. A few record highs could be tied or broken, mainly in Colorado and Wyoming.

Highs on Friday will be in the mid to upper 90s across a large portion of the Plains, Midwest and into the Deep South. A few isolated areas could see the century mark in the northern Plains. Surface high pressure will limit any relief in the form of rain to perhaps right along the immediate Gulf Coast and Upper Midwest.

By Saturday, more than a dozen states may have cities flirting with or breaking record high temperatures. High pressure will stack the deck toward highs in the mid to upper 90s across much of the Heartland and South and may bring a few 100s to the mid-Mississippi Valley. Some showers and thunderstorms may cool off the Gulf Coast.

Dew points will be well into the 60s this weekend, with some locations climbing into the 70s. When the high dew point values are combined with temperatures in the 90s, it will feel even hotter. In some spots, feels-like temperatures will reach into the 100 to 105 degree range at times.

On Sunday, the heat arrives into the Carolinas as the ridge continues its trek eastward. Highs will be in the mid 90s to low 100s in the Carolinas, while staying very warm in the central Plains and Ohio Valley with highs in the 90s.

Selected records that may be broken:

Nashville and Springfield, Illinois, are currently forecast to be near 100 degrees on Saturday, which would be the first 100-degree day for both cities since July 2012 if the century mark is reached.

Chicago has yet to hit 90 degrees this spring, but is likely to soar into the low to mid 90s both Friday and Saturday before cooler air arrives Sunday. Detroit and Cincinnati are two other locations that may see their first official 90-degree readings of the year.

This type of heat can be life-threatening for some, especially if you aren't adequately prepared. Remember: heat-related illnesses, such as heat exhaustion and heat stroke, are possible under these extreme conditions. If you are traveling with young children or pets, please do not leave them unattended in a hot vehicle.

More from AOL.com:
Clif Bars recalled over listeria concerns
You could be showering all wrong
The best photos from the week in sports: 5/27 - 6/3