Pens prove mightier than the Sharks to close on Cup 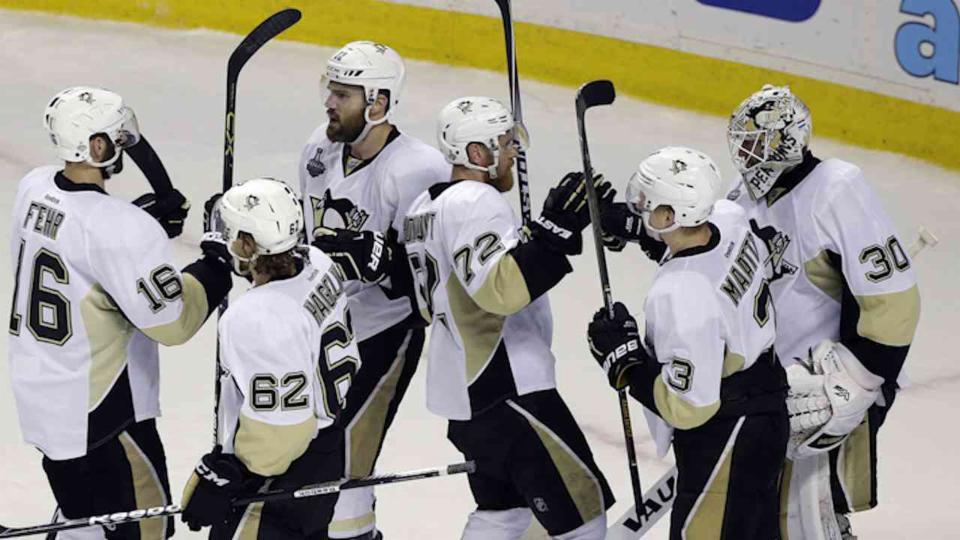 The Pittsburgh Penguins moved one win away from a fourth Stanley Cup triumph after Eric Fehr's late goal sealed a 3-1 road victory over the San Jose Sharks in Game Four on Monday.

Leading 3-1 in the best-of-seven series, the star-studded Penguins have a chance to clinch their first NHL title since 2009, and first on home ice, when the teams return to Pittsburgh for Game Five on Thursday.

Pittsburgh's three previous titles were secured in Minnesota in 1991, Chicago in 1992 and Detroit in 2009.

"Obviously, we know what's at stake, but we don't have to change a thing," Penguins captain Sidney Crosby told reporters.

"Just keep playing the same way we're playing and the results will take care of themselves."

Should the Penguins keep playing the stingy team defense they have exhibited in the first four contests, limiting the Sharks to only seven goals in the series to date, there is a fair chance they will be celebrating in front of their own fans.

Pittsburgh has blocked a lot of shots in this series and taken away the strength of the Sharks offense, San Jose's ability to deflect pucks from in close off shots from the point.

"That's a huge part of their offense, is trying to get pucks through from the point with shots and tips," Penguins rookie goalie Matt Murray said.

"The more we can stop the puck from getting to our net front, I think the better chance we're going to have."

On Monday, the Penguins forged ahead in the first period through defenseman Ian Cole and forward Evgeni Malkin's power-play marker in the second doubled their advantage.

Sharks forward Melker Karlsson pulled one back at 8:07 of the third period as the home side raised their tempo in a desperate late bid for parity, but forward Fehr restored Pittsburgh's two-goal advantage with 2:02 remaining.

For San Jose coach Peter DeBoer, being in a dire situation is a familiar feeling. In 2012, when DeBoer was at the helm of the New Jersey Devils, the Los Angeles Kings raced out to a 3-0 Stanley Cup Finals series lead.

DeBoer galvanized the Devils to win Games Four and Five but they were unable to complete the comeback as the Kings won the series 4-2.

"There's no quit in our group," DeBoer said. "We've been the best road team in the league. We're going to show up and try to get this back here for Game Six. Until you win four, this isn't over."

More from AOL.com:
Sheary on target as Pens tame Sharks in overtime
Sharks strike late to claw back into Stanley Cup series
Daily Debate: Is the Stanley Cup worth watching now?