Sharks strike late to claw back into Stanley Cup series 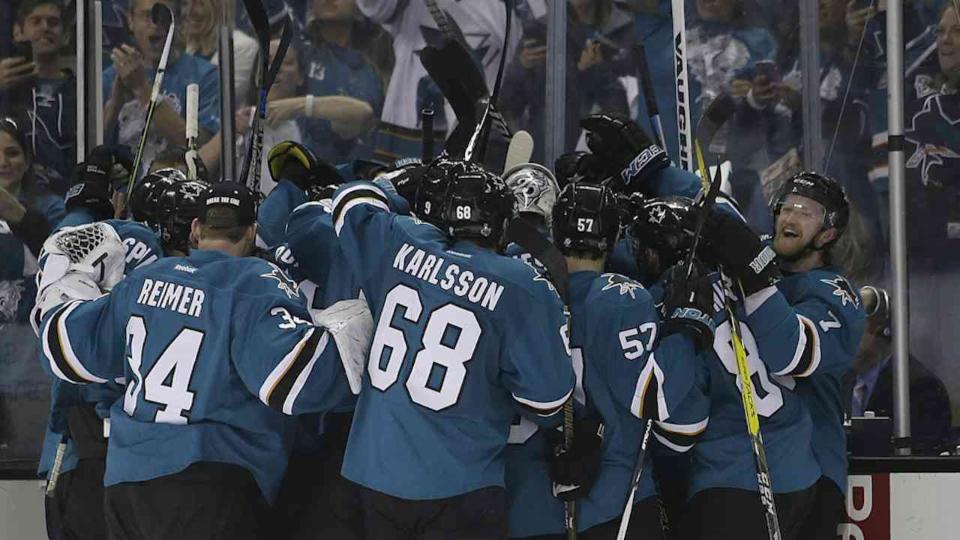 The San Jose Sharks flipped the script on the Pittsburgh Penguins with a game-winning overtime goal that gave them a 3-2 win on Saturday and pulled them back into the Stanley Cup Final series.

Finnish forward Joonas Donskoi scored at 12:18 in OT to snap a 2-2 tie and bring the SAP Center crowd to life, cutting the home team's deficit to 2-1 in the best-of-seven game series.

San Jose, who dropped the first two games on late Pittsburgh goals, had appeared to be on the brink of elimination before Joel Ward made it 2-2 at 8:48 in the third period.

Donskoi completed the comeback in the extra session where he skated around the back of the net, then flipped a shot behind Pittsburgh goaltender Matt Murray.

"It was a great game, we never gave up. I think this was our best game so far so we had the confidence to keep going," Donskoi told reporters after his sixth goal of the playoffs.

"Just keep sticking, that's how we want to play."

The Sharks have waited 25 years to reach the franchise's first ever Stanley Cup Final, but it threatened to be a short stay there as the Penguins twice took the lead in Game Three.

Pittsburgh, who has outshot San Jose by a combined 113 to 74 through three games, drew first blood in the opening period where Ben Lovejoy gave the visitors a lead.

San Jose's Justin Braun struck back at 9:34 in the first to tie the game, but Patric Hornqvist reestablished Penguins' control at 19:07 in the second.

Ward delivered a lengthy tying blast for the Sharks just as time was expiring on their power-play and sent them into the locker room with renewed optimism.

"It was a huge turning point for us in the series," San Jose veteran Joe Thornton told reporters after finishing with two assists and four shots on goal, including close calls in the overtime.

"Our coach was saying 'hey, we've been on the other end of this a couple times this postseason; it's our turn.' And it was."

Sharks goaltender Martin Jones was a critical reason why, recording 40 saves to keep his team afloat.

The Penguins, who had their four-game playoff win streak snapped, are trying to seize their first Stanley Cup since 2009. They can still take commanding control with a victory in Game Four on Monday in San Jose.

"I liked a lot of things we did in the game," said Pittsburgh coach Mike Sullivan.

"We didn't get the result, but we played hard and had some great opportunities to score. It was a fairly even game."