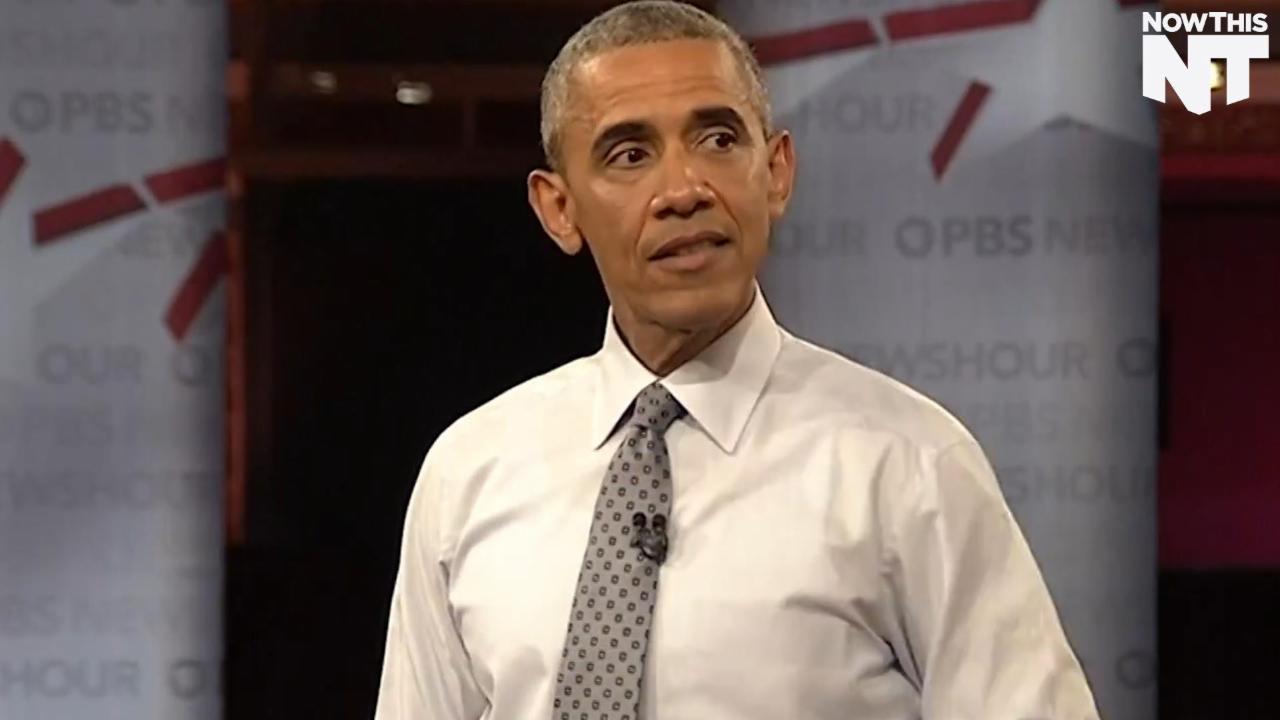 On June 1, President Barack Obama appeared at a town hall in Elkhart, Indiana, for PBS NewsHour. After the broadcast, the President took questions from audience members and his answer to a question about gun control stood out for many.

Doug Rhude, a gun shop owner, challenged President Obama's record on gun control. Arguing that irresponsible people in our society are accountable for actions such as drinking and driving without having cars taken away from "the good guys," "why then do you and Hillary want to control and restrict and limit gun manufacturers, gun owners and responsible use of guns and ammunition to the rest of us, the good guys, instead of holding the bad guys accountable for their actions?" Rhude asked.

President Obama didn't hold back in his response to Rhude. "First of all, the notion that I or Hillary or Democrats or whoever you want to choose are hell-bent on taking away folks' guns is just not true," he said.

Obama attempted to set the record straight: "And I don't care how many times the NRA says it.I'm about to leave office. There have been more guns sold since I have been president than just about any time in U.S. history. There are enough guns for every man, woman and child in this country. And at no point have I ever, ever proposed confiscating guns from responsible gun owners. So it's just not true."

He continued in his explanation:

"What I have said is precisely what you suggested, which is, why don't we treat this like every other thing that we use? I just came from a meeting today in the Situation Room in which I got people who we know have been on ISIL Web sites, living here in the United States, U.S. citizens, and we're allowed to put them on the no-fly list when it comes to airlines, but because of the National Rifle Association, I cannot prohibit those people from buying a gun."

As gun violence becomes more and more prevalent in the U.S., the president has taken executive action to fix this problem. He unveiled his plan to cut gun violence in January, accusing the gun lobby of holding Congress hostage.

President Obama has strong response to gun control question
Thank you, @POTUS, for taking a crucial step forward on gun violence. Our next president has to build on that progress—not rip it away. -H
This is a dangerous level of executive overreach, & the country will not stand for it. https://t.co/YgNrG94tjg https://t.co/eMCSSSp3Rh
Presidential Candidate Bernie Sanders on President Obama's executive actions @NBCDFW https://t.co/mGllswtasI
Statement from @RepKayGranger on President Obama's actions on gun control @NBCDFW https://t.co/mVTMgwmNCE
Barack Obama begins crying during WhiteHouse talk referring to the 20 slaughtered 1st graders in Newtown. The tears started & wouldn't stop.
I don't care who you are, where you're from, what you did, as long as you agree 1000% to Obama's brilliant and passionate gun control speech
Whether you agree with his policy or not you can't deny Obama has sincere compassion. Congress should take note and learn compassion
I am proud every day working for President Obama, but especially today #StopGunViolence
Tears or not, Obama's gun law has zero chance of passing. This is gonna keep happening. Wonder if that's part of his frustration/fury.
Wonder if Republicans will greet President Obama's executive orders on guns with #thoughtsandprayers
So Obama just blamed variously the NRA, the voters, Congress, and the Constitution for gun violence. Funny, never criminals or terrorists.
Cruz: "Those exec. orders are not worth the paper they're printed on bc when you live by the pen, you die by the pen & my pen has an eraser"
Up Next

The president concluded his answer to Mr. Rhude's question by telling him that there is a way for commonsense gun laws to exist: "The only way we're going to do that is if we don't have a situation in which anything that is proposed is viewed as some tyrannical destruction of the Second Amendment."

You can watch the interaction below: