Sheary on target as Pens tame Sharks in overtime 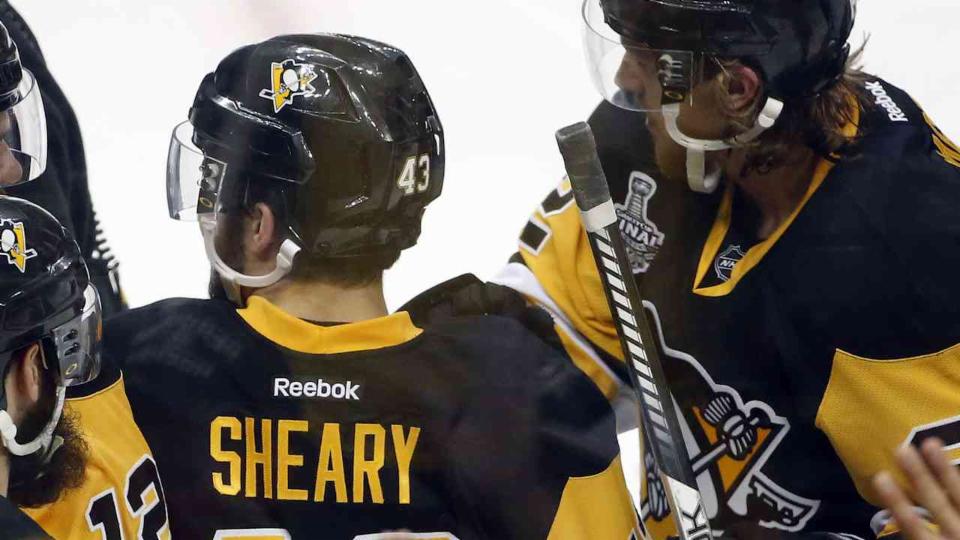 Conor Sheary scored early in overtime as the star-studded Pittsburgh Penguins received another key contribution from one of their younger players to seize control of the Stanley Cup Finals with a 2-1 win over the San Jose Sharks on Wednesday.

The Penguins grabbed a 2-0 lead in the best-of-seven series when captain Sidney Crosby won a faceoff back to defenseman Kris Letang, who then found Sheary wide open in the high slot and the rookie blasted home the winner just 2:35 into the extra period.

"It usually doesn't work out like that when you draw up a play or even talk about a play," the 23-year-old Sheary told reporters. "I think they kind of lost me when I came off the wall there. I had a lot of time to shoot. It worked out."

Thanks to the stellar play of rookies like Sheary, Bryan Rust and goalie Matt Murray, the Penguins are just two wins away from their first NHL title since 2009.

The Penguins were the dominant team in regulation, limiting the visitors to only 20 shots on goal with nine of those efforts coming in the third period alone.

The Sharks went more than 11 minutes of the second without putting a shot on Murray, who now has 13 playoff wins, two shy of the rookie record held by Patrick Roy (Montreal, 1986), Ron Hextall (Philadelphia, 1987) and Cam Ward (Carolina, 2006).

However, playing desperation hockey as the game was slipping away, San Jose defenseman Justin Braun managed to drift a shot through a crowd in front of Murray for the tying goal with 4:05 remaining in the third period.

The goal came as a welcome lift for Braun after his father-in-law, former NHL player Tom Lysiak, passed away on Monday.

Despite the disappointment of giving up the lead so late in regulation, the Penguins recovered quickly and closed out the contest in overtime.

"One of the things I've really liked about our team, and this is something that I think we've evolved over the last five months or so, but our guys just play," Penguins coach Mike Sullivan said.

"That's what we told them on the bench when it went in the net. San Jose is a good team. They're going to get some scoring chances.

"We liked how our team was playing. We felt like we controlled the majority of the play. We just have to keep playing."

Pittsburgh forward Phil Kessel opened the scoring at the 8:20 mark of the second period when he tapped in a goal-bound effort from center Nick Bonino, who bagged the winner in the Game One 3-2 victory on Monday.

The Penguins third line of Bonino, Kessel and Carl Hagelin have combined for 19 goals and 50 points in 20 playoff games.