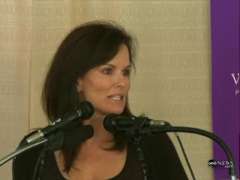 Another familiar face from the "trial of the century" is headed for the small screen.

Denise Brown, the sister of the late Nicole Brown Simpson, is developing a true-crime series for NBC News' Peacock Productions, it was announced Wednesday.

As part of the unscripted series, Brown and a team of experts will investigate all sides of the story in cases where justice has been called into question.

"Denise has experienced first-hand the complexities of the criminal justice system," Peacock Productions vp of development Melody Shafir, said. "She testified on behalf of her sister during one of the most high-profile murder trials in recent history and will draw on that experience throughout the series, with a deep understanding of the impact the system can have on the victim's family."

Brown added: "Peacock Productions' expertise in the true-crime narrative and unscripted programming is unparalleled. I am excited to begin working with Peacock and tell the stories of lives that have forever been changed by the criminal justice system."

As a result of her sister's death in June 1994, Brown committed to raising awareness for domestic violence and has traveled the country speaking on the issue. She is also the founder and president of The Elite Speakers Bureau, which provides education on issues such as abuse, school and workplace safety, mental health and more.

Brown has also worked to help pass various legislative solutions for domestic violence and testified to the U.S. Senate Appropriations Committee to get increased funding for the Violence Against Women Act. She also assisted in the success of the Vine System, an automated victim notification service of the release of batterers from jail or prison.

The true-crime trend has only picked up steam since the success of HBO's The Jinx last year, and more recently, Netflix's Making a Murderer. CBS is also developing a true-crime series centered on the 1996 unsolved murder of JonBenet Ramsay, while ABC is set to premiere the first of a multi-part 30 for 30 docuseries centered on O.J. Simpson. The subsequent parts of the series will air on ESPN. O.J. Simpson: Made In America originally premiered at Sundance prior to FX's hit anthology series The People v. O.J. Simpson: American Crime Story, which brought big ratings and acclaim to the cabler. (Brown was portrayed by Jordana Brewster in the series.)

Since the FX series, several real-life figures from the case have returned to the spotlight, including prosecutor Marcia Clark and defense attorney Robert Shapiro, who spoke about the trial publicly for the first time in more than 20 years to Megyn Kelly for her Fox primetime special.