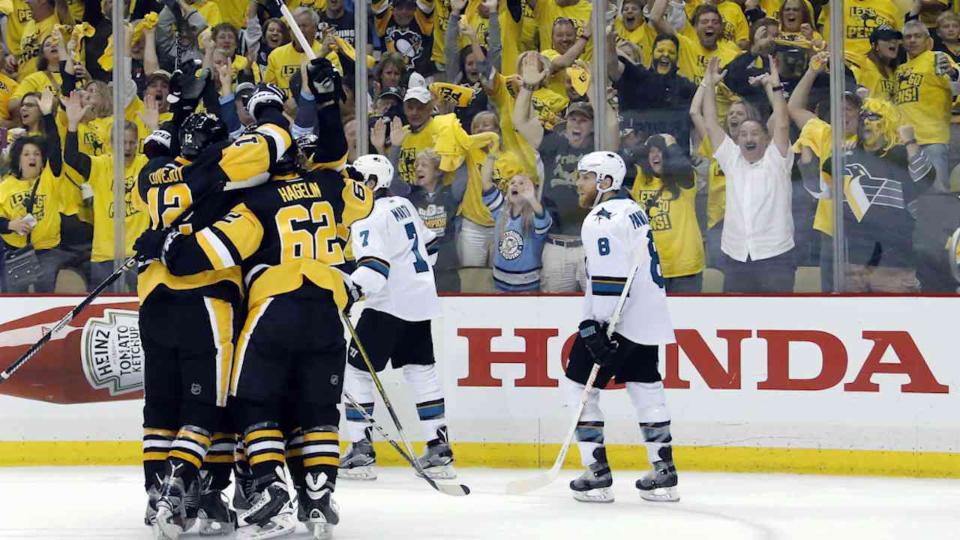 Nick Bonino scored late in the third period to help the Pittsburgh Penguins recover from a mid-game meltdown and claim a 3-2 home victory in their Stanley Cup Finals opener against the San Jose Sharks on Monday.

Locked at 2-2, the game appeared destined for overtime until Bonino took a pinpoint pass from Pittsburgh defenseman Kris Letang and lifted a shot over the blocker of San Jose goalie Martin Jones with 2:33 remaining in the third period.

The victory was the third in a row for the Penguins after they overcame the Tampa Bay Lightning in Games Six and Seven to advance to the best-of-seven Stanley Cup Finals.

"It's one of those shots that wasn't my hardest shot by any means, but just found a way to kind of flip it over him," said Bonino, who has scored five winners among his 12 career playoff goals. "It was great pass from (Letang)."

Bonino was a key off-season acquisition by Penguins general manager Jim Rutherford and his performances throughout the playoffs have not been overlooked by his coach.

"I think he's a terrific player in every aspect of the game," Mike Sullivan said. "We use him in so many key situations, both offensively and defensively.

"He's brave. He blocks shots. He's a good faceoff guy. He's done so much for this team to help us get to this point. I don't know what other praise I can shower on him right now."

The Penguins continued to get contributions from players that began the season with their American Hockey League affiliate in Wilkes-Barre/Scranton, Pennsylvania.

Promoted forwards Bryan Rust, who left the game in the third period after taking a hit to the head, and Conor Sheary built a 2-0 lead with goals 62 seconds part in the first period.

At the other end, rookie 22 year-old goalie Matt Murray made 24 saves for his 12th victory of the playoffs.

However, after a sluggish start, the Sharks rebounded to tie the game with second-period goals from Tomas Hertl and 36-year-old Patrick Marleau, who after 18 seasons in San Jose, finally made his first appearance in the Stanley Cup Finals.

"We didn't play our game in the first period," Sharks coach Peter DeBoer said. "We stood around and watched.

In 59 of the previous 76 National Hockey League finals (78 percent), the team that has won the series opener has gone on to win the championship since the best-of-seven format was introduced in 1939.