Celebrities express outrage over killing of Harambe the Gorilla 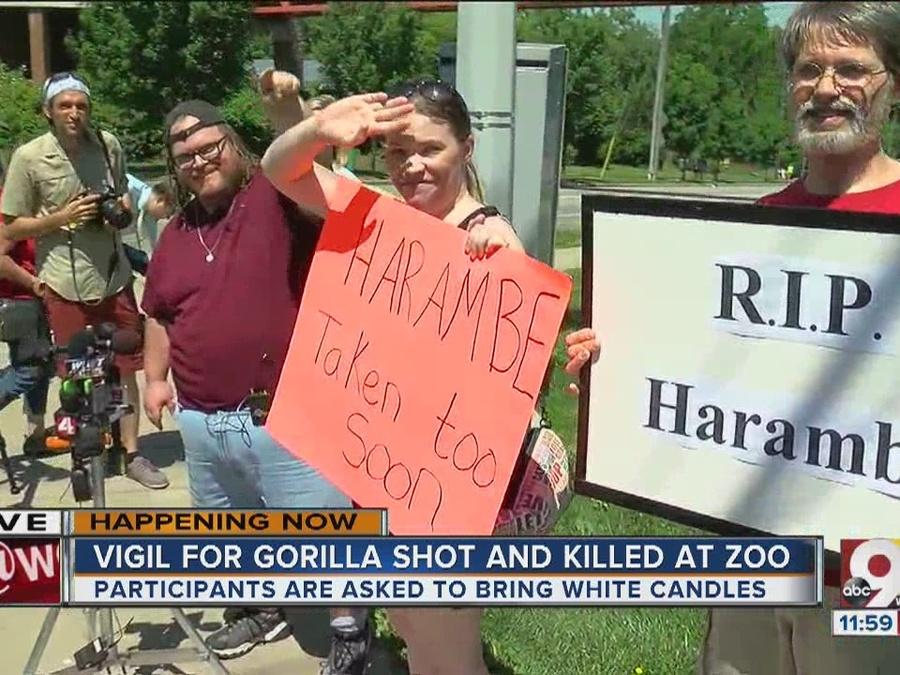 Numerous celebrities have spoken out after a 17-year-old western lowland gorilla named Harambe was fatally shot Saturday to protect a child who fell into the animal's Cincinnati Zoo enclosure.

The killing has sparked a debate around the world as to who is to blame for gorilla's death.

"We are heartbroken about losing Harambe, but a child's life was in danger and a quick decision had to be made by our Dangerous Animal Response Team," Zoo director Thane Maynard said in a statement.

Below are celebrity reactions to the incident:

Celebrities express outrage over killing of Harambe the Gorilla
RIP #harambe Im sure I will get tons of backlash (per usual) I mean let's be honest, I wear the wrong sweatpants and the entire world has something to say about it, but once again , another senseless horrendous animal being killed over people not using their brains. If you watch the footage, you see this gorgeous animal holding that child's hand. Do with that ,what you will. As sad as this makes me, a part of me is happy for that amazing creature doesn't have to live in captivity another day. Bring on the hate!!!! 👍🏼
Damn homie.. You was just chillin at your crib. R.I.P https://t.co/shTdDzldwh
Oh the poor gorilla,he did nothing wrong,if you watch the video,so sad..as a mother I would've jumped in too.
It seems that some gorillas make better parents than some people.
If your kid purposefully falls into a gorilla cage, you should just tell your kid goodbye. That's called Darwinism.
If you leave your kid in a car you go to jail, if you let your kid fall into a Gorilla Enclosure u should too! #TeamDl
It saddens me to no end that a gorilla had to be put down because of an irresponsible parent. However you look at it, that's just sad.
If I ever let my toddler fall into a gorilla enclosure please leave the gorilla alone and just shoot me.
Taking their eye off the ball, but no child should ever be able to crawl into a gorilla compound. https://t.co/intjxDvUqk
How was the gorilla enclosure not child proof? You're dealing with an endangered species & yet you've made it possible for kids to fall in?
For the record, the parents are absolutely partially at fault, but it shouldn't have been possible, unsupervised or otherwise.
This is why I hate zoos! This is so messed up. This poor gorilla. https://t.co/sdr3KXMyQa
I just don't see how your kid ends up in a gorilla pit. I come from one of those if the kids being too quiet something wrong families.
that Gorilla tt is a rabbit hole i can't stop reading. both tragedy & comedy
PLEASE morning shows, don't put these idiot parents on your programs. The gorilla is dead. NO ONE wants to hear from them. #Harambe
"17 yr old Harambe the Gorilla was shot dead after boy falls into Ohio zoo enclosure" Where were the parents?! https://t.co/q3hS34xccL
Last week a naked man in Chile jumped in a lion den on purpose now this boy with the gorilla...Beautiful innocent animals killed. Smh 💔 🦁🦁🐵
Up Next

Below is the full statement from the Cincinnati Zoo on the death of the gorilla:

A 4-year-old boy climbed through a public barrier at Gorilla World at around 4pm today (May 28) at the Cincinnati Zoo & Botanical Garden and fell into the exhibit's moat. The two female gorillas in the exhibit were recalled immediately, but the third, a male, remained in the yard with the child. The Zoo's Dangerous Animal Response Team responded to the life-threatening situation and made the difficult decision to dispatch the gorilla (Harambe).

"The Zoo security team's quick response saved the child's life. We are all devastated that this tragic accident resulted in the death of a critically-endangered gorilla," said Zoo Director Thane Maynard. "This is a huge loss for the Zoo family and the gorilla population worldwide."

The child was alert when transported to Children's Hospital Medical Center. The hospital is not releasing details on his condition. "Our thoughts and prayers are with the family and little boy," said Maynard.

The Zoo will be open tomorrow, but Gorilla World will be closed until further notice.