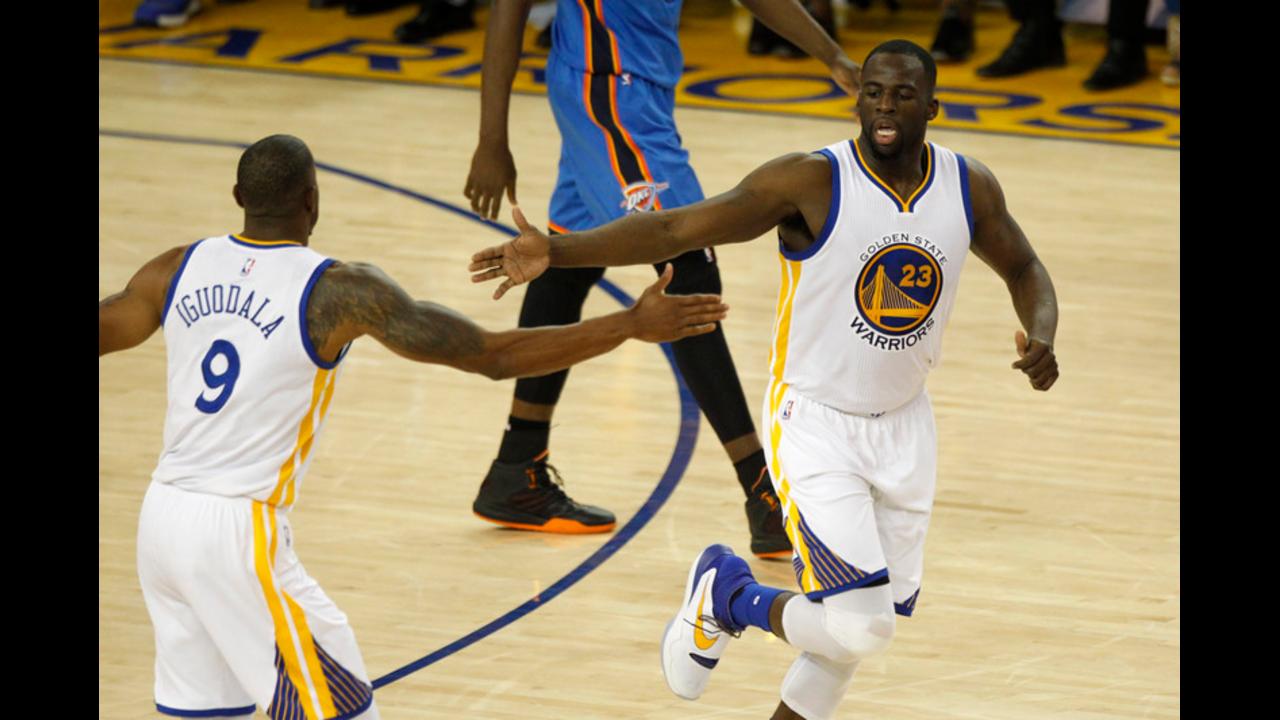 (The Sports Xchange) - Andre Iguodala and Harrison Barnes bombed in 3-pointers on consecutive possessions during an eight-point flurry that opened a 12-point lead early in the fourth quarter, and the Golden State Warriors held on from there to stay alive in the Western Conference finals with a 120-111 victory over the Oklahoma City Thunder on Thursday night.

The victory trimmed Golden State's deficit in the best-of-seven to 3-2, with the series returning to Oklahoma City for another possible close-out game for the Thunder on Saturday night.

Game 7, if necessary, would be Monday in Oakland.

Stephen Curry poured in 31 points, going 10-for-10 from the free-throw line, as the Warriors overcame a 40-point explosion by Thunder star Kevin Durant to keep their hopes of a title repeat alive.

Iguodala and Barnes then nailed their 3-pointers, opening an 89-77 advantage, Golden State's biggest lead of the game to that point.

The advantage reached 13, but power forward Serge Ibaka wouldn't let the Thunder go quietly. He swished a pair of 3-pointers, and when Durant added a third, all of a sudden Golden State's lead was just 103-98 with still 4:34 to go.

Curry then responded with his biggest hoop of the night, a driving left-handed floater on which he was fouled. He converted the three-point play, pushing the lead to eight.

The Golden State defense took it from there, holding the Thunder without a field goal until a Durant dunk with 56.9 seconds left, by which point the Warriors had pulled away into a commanding 112-101 advantage.

Klay Thompson overcame 2-for-9 shooting on 3-pointers to back Curry with 27 points for the Warriors, who are now 4-1 after losses in the playoffs.

The Warriors won despite making just nine of their 24 3-point attempts.

Andrew Bogut had 15 points and a game-high 14 rebounds, and Draymond Green had an 11-point, 13-rebound double-double for the Warriors.

The Warriors shot 47.1 percent for the game to 42.9 percent for Oklahoma City. Golden State battled the Thunder even on the boards, 45-45.

Russell Westbrook backed Durant with 31 points to go with seven rebounds and a team-high eight assists.

Ibaka had 13 points and Steven Adams a team-high 10 rebounds for the Thunder, who were able to eliminated Dallas and San Antonio in earlier series at first opportunity.

The Thunder made 13 of their 30 3-point attempts, outscoring the Warriors 39-27 from beyond the arc.

More from AOL.com:
The Warriors have run into a simple problem against the Thunder — and it can't be solved
Thunder demolish Warriors, grab 2-1 series lead
Thunder one win from Finals after Game 4 blowout