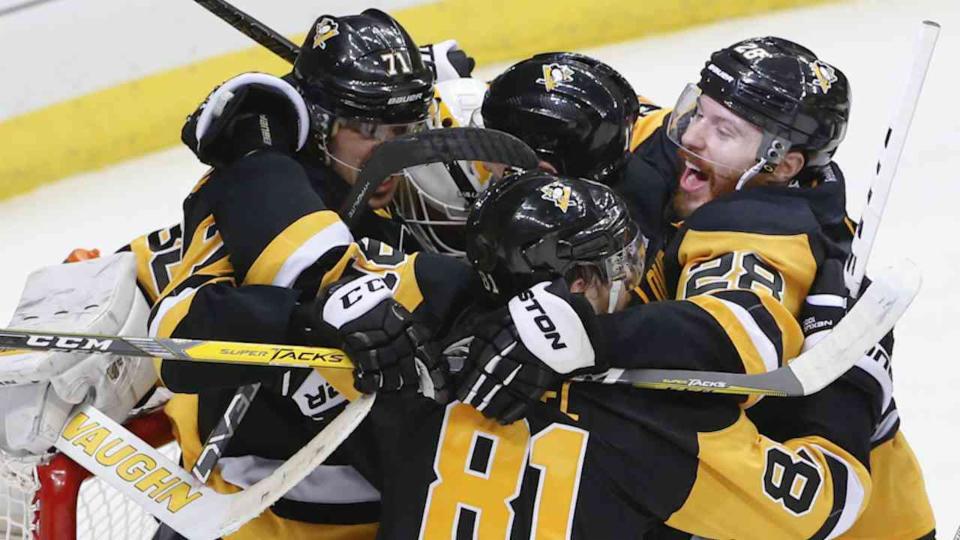 At the midway point of the season, the Penguins were in danger of missing the playoffs. Fast forward five months and they're now playing for the Stanley Cup after defeating Tampa Bay 2-1 in Game 7 of the Eastern Conference Finals on Thursday.

For the fifth time in franchise history and the third in the last eight years the Penguins will skate for hockey's ultimate prize beginning on Monday against the Western Conference champion San Jose Sharks. Fittingly indicative of the sweeping change that righted the Pens season, Bryan Rust, who spent much of the early part of the year with the Pens AHL affiliate in Wilkes-Barre/Scranton, scored both Pittsburgh goals in the decisive game and goaltender Matt Murray, also a product of the Pens' minor league system, kept the door closed on Tampa yet again.

After a scoreless first period Rust broke through just 1:55 into the second to give the Penguins the early lead. Tampa Bay's Jonathan Drouin evened the score at 9:36 to breathe new life into the Lightning and somewhat quiet the Consol Energy Center crowd, but Rust answered less than a minute later to retake the lead for Pittsburgh and revitalize the thousands of gold clad Pens fans. Thanks to Murray and a swarming style of play that was nonexistent through the season's first three months but has become their calling card during this playoff run, Rust's two tallies were all the Penguins would need.

Lightning captain Steven Stamkos returned to the lineup for the first time since being diagnosed with a blood clot and subsequently undergoing surgery in early April. His return gave Tampa a much needed boost both in on-ice skill and emotionally, but it wasn't enough to overcome a Penguins team on a mission. Pittsburgh again drastically won the shots on goal battle 39-17 in what had become a theme throughout the series, but netminder Andrei Vasilevski kept the Bolts in the game making save after save to deny the torrid Penguins attack. He made one two few however, as in the end the 2-1 margin held despite Tampa mounting a third period offensive that saw them nearly tie the contest on multiple occasions.

For the Penguins, returning to the Stanley Cup Finals represents a resurgence of massive proportions. Now a distant memory are the team's early-season struggles; nights of minimal offensive output despite fielding one of the most talented lineups in the NHL on paper, lack of chemistry and fundamental breakdowns leading to a disgruntled locker room and a frustrated fan base. Over the preceding weeks stories of Jim Rutherford's brilliance in re-tooling the roster to assemble the type of team that is made for playoff contention were everywhere, as were the praises for the job Coach Mike Sullivan has done in taking over behind the bench and driving output not only from the club's incumbent stars but also the new crop of Penguins that he brought with him from Wilkes-Barre/Scranton.

There was criticism, much of it warranted and all of it the byproduct of being stars on a club with the hockey tradition that Pittsburgh has, of Sidney Crosby and Evgeni Malkin – and there were corresponding answers by both, Crosby in the form of three game-winning goals in the series and Malkin assisting on both Rust tallies in the clincher. When the two led Pittsburgh to the Finals in '08 and again in '09 to win the franchise's third Stanley Cup the prevailing notion was that there would be many more trips store for the two core leaders of the club.

But as life in the NHL goes, the ensuing years saw Pittsburgh suffer one playoff shortcoming after another, largely due to getting away from the style of play and type of roster composition that proved so effective in those two seasons, leaving many to question if the 87-71 tandem would go down as underachieving relative to their potential. Now as veterans, they have a chance to cement themselves in the company of another legendary Pittsburgh tandem of Lemieux and Jagr as multiple-time champions in black and gold.

And of course any recollection of the Penguins inspired run would be remiss without noting the resurgence in the careers of Carl Hagelin, and of course Phil Kessel, that coming to Pittsburgh brought about. Hagelin, best known in Pittsburgh for scoring the overtime game-winner as a member of the Rangers that eliminated the Pens from last year's playoffs had hit a dry spell after moving on to the Anaheim Ducks, but became re-energized when the Penguins acquired him in January. For Kessel, not only making his first appearance in the Finals, a feat he never came close to during his time in Toronto, but also leading the Pens in scoring on the way there, can only serve to quiet the critics who for much of the season had deemed the off season deal that brought him to Pittsburgh a failure.

As Crosby led the Pens in accepting the Prince of Wales trophy, and snubbing superstition by picking it up, it was clear that this Penguins club has made remarkable strides in a few short months. But it was also abundantly clear from their demeanor that they have four more steps to take to deem the process complete.