Thunder one win from Finals after Game 4 blowout 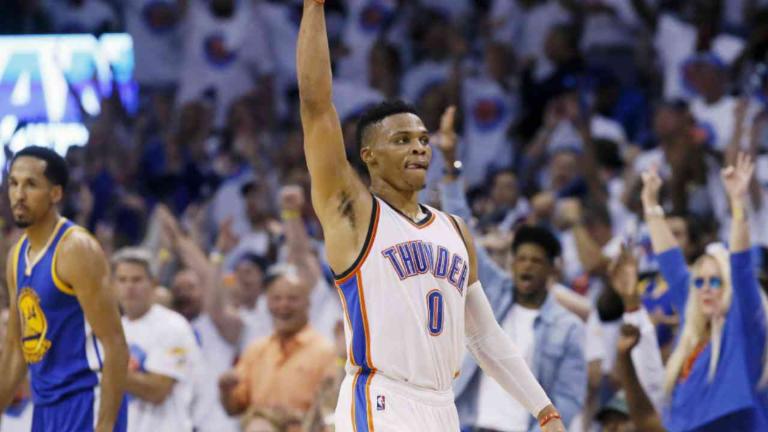 (The Sports Xchange) - The Oklahoma City Thunder moved within one victory of the NBA Finals after beating the Golden State Warriors 118-94 in Game Four on Tuesday.

Russell Westbrook collected 36 points, 11 assists and 11 rebounds as Oklahoma City grabbed a 3-1 lead in the Western Conference finals, thanks in large part to Westbrook's first triple-double of the postseason.

Defending champions Golden State will attempt to stay alive on Thursday at home in Game 5.

Klay Thompson led the Warriors with 26 points. League MVP Stephen Curry was held to 19 points on 6-of-20 shooting, and he and Thompson combined to make just six of 21 3-point attempts. Harrison Barnes posted 11 points in the loss.

The Warriors lost back-to-back games for the first time in the postseason after never losing consecutive games in the regular season during their record-setting, 73-win campaign. They fell by a combined 52 points over the two games in Chesapeake Energy Arena.

Durant came out of the blocks on the attack. Instead of settling for jump shots and 3-pointers, he started the night driving the ball to the rim and forcing the Warriors to foul him.

RANKING THE BEST 25 PLAYERS IN HISTORY:

Thunder one win from Finals after Game 4 blowout

Durant and Westbrook were a combined 12-for-12 from the line in the first half. As a team, the Warriors only attempted 17 free throws in the opening two quarters.

The Warriors, who fell behind by 14, got back into the game without their superstars leading the way. It was the play of Barnes and Festus Ezeli that helped Golden State close the gap to two midway through the second quarter.

However, the Thunder kept pounding the boards and winning the hustle points. That included Adams getting to a loose ball outside the 3-point arc and firing a fastball pass to Roberson under the goal for a layup.

The play was indicative of the type of night Oklahoma City was having as the Thunder raced out to a 72-53 halftime advantage.

The 19-point lead did not last long as Thompson began to tear apart the Thunder defense. After scoring just four points in the first half, he broke loose for 19 points in the third quarter and helped slice the lead down to seven.

Once again, though, Oklahoma City ended the quarter strong to take 12-point advantage. That would be as close as Golden State would get.

For the second game in a row, the Thunder did not let up and went for the kill in the fourth. The Warriors had no answer and pulled their starters with 3:15 left.