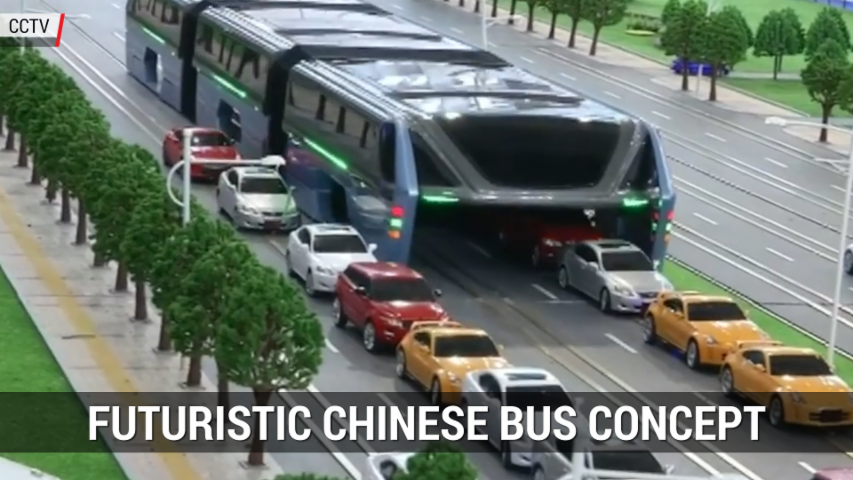 As people continue to descend on cities, urban planners are looking for solutions to accommodate growing populations — especially in regard to transportation.

One Chinese company is exploring the potential of a bus system that glides above existing infrastructure. At the China Beijing High-Tech Expo, Transit Explore Bus showed off a tiny prototype of its futuristic bus, according to the Xinhua News Agency.

Conceptually speaking, the straddle bus follows the same thinking as Hyperloop One's proposal. Rather than build new infrastructure, both TEB and Hyperloop One are exploring how they can build on top of right-of-ways that already exist.

The elevated bus is as wide as two lanes of traffic and sits on a set of rails. The spacious vehicle is designed to ferry 1,400 passengers at a time. One straddling bus could potentially replace 40 standard buses, Song Youzhou, TEB's chief engineer, told the Xinhua News Agency.

To board, passengers will take elevators that port directly into the buses.

In addition to evading congestion, the traffic-straddling bus is conceived to be all electric, so it won't generate more emissions to already-polluted cities. Though the bus will be able to sit above roadways, it won't be speeding between destinations. After all, this vehicle is no Hyperloop. The bus can travel up to approximately 37 miles per hour.

Song said the bus will also save cities money. He told Xinhua News Agency the system will cost 16% of what a subway system costs.

Song said his company is working on a pilot version of the vehicle in China's Changzhou Province. The first test of the vehicle is scheduled for later this summer, potentially between July and August, he said.

More from Mic.com:
100 Years of Nail Art Shows the Incredible Evolution of the Manicure
How Subscription Beauty Boxes Are Using Millenial Spending Habits to Cash In
This Black Mom Perfectly Nails What's Wrong With Dads Posing in Prom Pictures With Guns