Dog saved by vet intern moments before being put down

Happy endings are even happier when they involve dogs.

Ollie, a Shetland sheepdog, was scheduled to be put down in DoveLewis Animal Hospital in Portland, Oregon, after multiple veterinarians could not figure out what was wrong with the sick pup. Minutes before the procedure, a tick was found hidden behind the dog's ear and everything started to make sense.

A news release from DoveLewis explained that after a recent trip to eastern Oregon, Ollie became very ill. 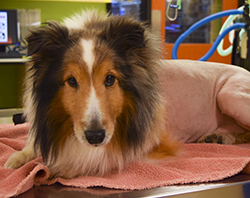 Ollie's owners, Al and Joelle Meteney, "noticed that Ollie was increasingly lethargic. He was very weak, finding it difficult to walk, and he would only eat when he was hand fed."

The 10-year-old dog had previously been extremely healthy and active, so this was particularly unusual.

The couple took Ollie to their veterinarian, who conducted a full range of tests. Unfortunately, a diagnosis could not be reached and Ollie's health began to worsen.

As the news release states, Ollie had reached a point where he was unable to eat or go to the bathroom on his own, and was almost completely paralyzed.

"Since there seemed to be no treatment to fix Ollie's condition and his quality of life was rapidly deteriorating, Al and Joelle made the extremely difficult decision to put Ollie to sleep at DoveLewis," it says. 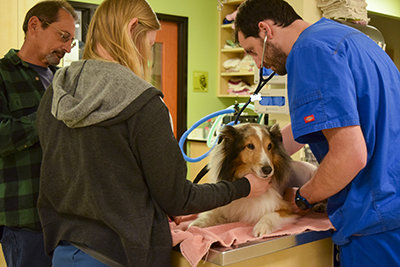 Right before Dr. Adam Stone was scheduled to put the dog to sleep, his intern Neena Golden attempted to comfort Ollie by scratching him behind the ears. It was then that she felt a lump on his skin, which turned out to be a tick, and ultimately, the cause of Ollie's ailments.

In the news release, Dr. Stone explained that, "The tick was very bloated, and there was lots of fecal material from the tick. It had obviously been there for a while."

Ollie had been experiencing a rare case of tick paralysis, and this new diagnosis meant that he could start to show signs of improvement just three days after removing the tick.

To make absolutely certain that Ollie had no other ticks hiding on his body, the hospital staff shaved his fur completely. Much to everyone's surprise, just 10 hours after Ollie returned home he was walking again.

"We were astounded by the quick turnaround," his owner said.

According to the news release, Ollie has made a miraculous recover and is back to his old, active self.

Pet owners should be aware that the tick still managed to attach to Ollie despite the fact that he was wearing a tick collar during that fateful outdoor adventure.

In the future, Dr. Stone has suggested that Ollie's, and other adventurous dogs', owners use, "a tick collar as well as ingestible tick prevention for their next excursion."

Click below for the most popular dog breeds in the U.S.:

Dog saved by vet intern moments before being put down
5. Beagle
4. Bulldog
3. Golden retriever
2. German shepherd
1. Labrador retriever
Up Next

More from Mashable:
'The Running Man Challenge' may be the new dab, but it actually goes way back
Watch Kanye West's unfiltered speech on 'Ellen': 'I'm sorry for the realness'
How Facebook's intimate VR film shows the power of what's to come